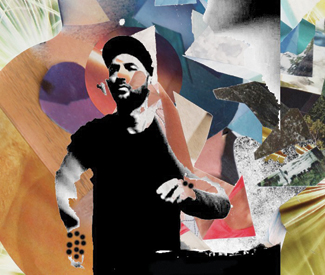 SUPER EGO “I had a cosmic experience back in January on the beach in Tulum, Mexico where I drew energy from the Moon which filled my entire body with a sensational electricity,” beloved LA-based Brit tech-house playboy and Crosstown Rebels label honcho Damian Lazarus wrote me recently. (Yes, I love my job.)

“My friends advised me that the universe was telling me something. Most people would have seen it as an opportunity to change their ways, be a better man, etc… I took it to mean I was supposed to create a 24-hour festival just up the road in Playa del Carmen to celebrate the end of the Mayan calendar and the birth of the new chapter of our lives. I feel that we as a generation of party people could do with something to latch on to at this point, something simple that can affect us for the better. The alignment of the planets during Day Zero is a perfect opportunity for us to look at ourselves, share this moment with each other, dance, laugh, and love together.”

Hey, if you’re going to help turn the eternal page — and/or be immolated in an annhilistic fireball of doom marking an insane galactic event and the completion of the final 25,625-year-long cycle in the Mesoamerican Long Count calendar — you might as well be dancing around a pyramid of Mayan ruins on a Mexican beach at Day Zero (December 20-21, www.dayzerofestival.com). The vast and killer lineup includes some tasty big names and personal favorites like Maayan Nidam, Subb-An, Trentemøller, 3D from Massive Attack, James Lavelle, and Matias Aguayo.

Plus, yay, there will be an entire stage of Mexican electronic artists I would absolutely love getting more acquainted with, including Damian Uzabiaga, Damian Romero (a lot of Damians at the end of the world, apparently), Rebolledo, Guada, Regina, and Muan. Lots of art and yoga and love among the hummocks, too. “Magnificent opening and closing ceremonies,” Lazarus promises. Oh, and the surrounding community as well as Shamanic families from the Hiucholes tribes have been invited to participate, so it’s not just a bunch of foreigners trashing a native site for kicks I hope.

Why am I pumping a festival in Mexico in December? I’ve been far too worried about squeakers like who’s gonna win this stupid election, or if my East Coast friends will be Sandied off the planet, or whether my neighborhood will be set alight by fellow citizens protesting wealth disparity assholes from the suburbs rioting over a baseball game we won to give a second thought to which high-quality consciousness-raisers I’ll be smuggling into the apocalypse. Maybe I just want to get away, if it’s the last thing I do. Will it be the last thing I do?

“I’m around 50 percent certain the world will not end,” Lazarus says, his glass half full. “If it is going to, I’d like to play the last record.” Please let that record be “The Ketchup Song,” Damian.

The Sarcastic Disco legend is truly one of the great English eccentrics, mixing a punk rock attitude with rare groove and warehouse classics that send his massive following over the moon. He has some deep San Francisco connections, especially with our own crew of pagan Brit crazies, the Wicked crew. Some major energy right here.

All the best parties at Deco Lounge are fleeing in the face of new ownership — which gives me a major sad, since I love that glowing Tenderloin afterhours hotspot. The warmest, loveliest disco monthly in the city, Go Bang, has now banged out to the Stud. I’m willing to bet it stays brilliantly mixed and vibrant, with DJs Sergio and Steve Fabus at the helm, though.

Tech-soul of the extra groovy and stylish variety from German duo Matthias Reiling and Hauke Freer, which comes with driving beats and quite a few shiver-inducing cuts and live samples that reveal the depth of their “staying up all night researching house music” aesthetic.

The real deal in soulful house is the wonderfully diverse monthly Mighty Real parties at, yes, Mighty — and you know the spirits above will reflect on the dancefloor when NYC’s glorious Timmy Regisford of the Shelter polishes the decks. With fab DJ David Harness (happy birthday, baby!)

Fantastic — and fantastically fun — turntablist is back, with his “12-bit blues” Vinyl Vaudeville tour, which sounds like a hoot. Using old school sampling tools and a bit of analogue magic, he’s set to take us back to the good ol’ days of all this hip-hop dance music stuff. With Adira Amram and the experience.

Hardcore rave in 2012: thy name is Deathface, and thine origin is Brooklyn. A perfect capper to your two-week Halloween bender, the duo spaz out gabber-style with horror movie effects and post-banger freaking. Some of it’s a little precious, but still worth your fist-pump.