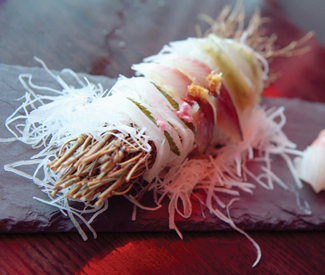 APPETITE Sushi bars proliferate around SF, with two more brand new spots opening on Russian Hill and down in the Mission.

Think of Elephant Sushi as on “island time” (read: chilled out) and you’ll enjoy your experience all the more. Reminiscent of early days at the original Sushi Bistro in the Inner Richmond when it first opened, dreadlocked wait staff and reggae tunes set a relaxed, island vibe at Elephant. It’s soft opening was in late August in the former Sushi Groove space, so Elephant is still in its infancy. Besides the Japan-meets-Jamaica spirit of the cozy space, the restaurant sets itself apart at first glance with real wasabi (which I love eating on its own), housemade soy sauce, and pots of intense, pickled ginger.

Winning points for doing what so few sushi restaurants do, even in our eco-conscious region, Elephant sources mostly wild or sustainably farmed fish, going the funky-fun route in their rolls and appetizers without sacrificing freshness and precision. Walu (Hawaiian term for escolar, the fish occasionally known to cause potentially unpleasant side effects in the… ahem… bathroom) is succulent and buttery here ($5 nigiri/$11 for five-piece sashimi), among the best walu I’ve ever tasted. Sizzling mango seabass ($12) wins on presentation, arriving on fire in a mini-cast iron skillet, thanks to sake and vodka, doused in masago aioli, Japanese chilis, and scallion. Unfortunately, the dish was bland, a let down after the flashy flame of its presentation.

If not quite the exquisite bites served at Bar Crudo, this crudo still pops with fresh flavor. Though varying in taste, maki (rolls) seems to be where their whimsical ethos best shines. Spicy king salmon ($9) rolled with cucumber, orange peel, and masago roe in chili sauce is heavy on the orange notes, while the White Out ($15) is a mix of hamachi and avocado draped in more of that luscious walu (seared in this case — I prefer it raw.)

The roll that stayed with me is the Boom Box ($10). I adore raw scallop, served here with avocado, crunchy garlic chips and English cucumber. A ripe banana drape with a sweet soy glaze sets it apart, a spanking fresh, of-the-sea dessert. The banana theme continues in neighboring Swensen’s banana ice cream ($3), all-in-all leaving Elephant Sushi firmly placed in the sleepy Hyde Street ‘hood, a welcome addition that I look forward to watching come into its own.

The building formerly housing Spork and pop-up Rice Broker was too cool to stay empty for long. In August, Sugoi Sushi opened in the space serving nigiri ($4.25–$7 for two pieces), five-piece sashimi ($12-15), sushi rolls/maki ($6–$13), and a quite reasonable omakase tasting menu of roughly $40 for a few rounds of sushi. Mini-two person booths remain intact, while red walls, pillows of lime green and red brighten the space.

Friendly staff bring out plates that border on works of art — as fine sushi tends to do. In this case, the artistry goes a step beyond. Case in point: a sashimi platter as part of the omakase arrives on a stone slab with a bundle of twigs covered in shredded daikon radish and draped with cuts of fish: masaba, Japanese mackerel ($6); toro. blue fin fatty tuna ($10); and kanpachi, baby yellowtail ($6). Another trio — raw scallops, escolar dotted with lemon seed mustard, and albacore belly bin toro — is presented three ways: in a cup, on a shell, on a pile of daikon.

While presentation immediately impresses, on each of my visits there’s been a funky piece of fish or two, though the restaurant emphasizes sourcing fresh daily. Japanese mackerel on one visit was almost unbearably salty, while Japanese red snapper with truffle oil and sea salt was nearly gummy. Yakitori ($3) at times disappoints, namely the hot dog-like spicy pork sausage. Tender chicken thigh fares better.

Rolls are filling and bright, like the Golden Mountain ($14) packed with toasted salmon, scallop, crab, and avocado, in curry tempura, or the Hot and Cold Tuna ($12), deep-fried spicy tuna covered with maguro roe and seaweed salad. Sashimi-like slices of seared blue fin toro ($18) are a bit salty, but fresh in chili sesame sauce and curry onion tempura, which adds a rich, savory layer to the fish.

While Sugoi is still clearly on the hunt for its identity, suffering from consistency issues, the funky, relaxed space on Valencia Street and the artful eye of its sushi chefs hold promise — it’s still steps beyond the other sushi restaurants lining the street.