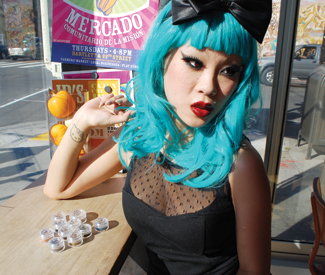 STREET SEEN “Oh, now there’s someone taking a picture of us,” says Swagger Cosmetics founder Blake Karamazov, gesturing at a paparazzi who is snapping away through the cafe’s plate glass window. No shade, shutterbug — drag visions being interviewed while eating vegan Asian pear pie at 2:30pm deserve a capture or 10. (But c’mon, next time ask first.)

Karamazov’s experiments in makeup began as a way to facilitate her own total disregard for normative wardrobe choices. Not surprisingly, given her own penchant of out-of-this-world looks, her line celebrates others with non-fuckwithable attitude.

A Swagger shoot this summer starred Sailorhank, a nine-year old boy from Seattle who crosses gender lines like a champ and, providentially, was a cinch for the diminutive Karamazov to style — they share a shoe size. She tells me that her colors are made for “any club kid, anyone interested in genderbending, androgyny.”

We get back to her line of drag-ready shadows and glosses, which are spread out on the counter in front of us in the brand’s bow-and-diamond-bedecked containers. The woman outside the window keeps snapping.

Karamazov’s makeup is made by her own darling little hands right here in (well, South) San Francisco. Every little box of glitter and glow is completely animal product-free. Vegan. Like the pie. Karamazov steers clear of animal products in her diet and elsewhere.

“The main problem [with conventional makeup lines] is the animal testing,” she tells me. Little-known, undeniably icky substances like carmine (extracted from beetles) and lanolin (charmingly, from the grease in sheep’s wool) are present in trace amounts in makeup products.

But it is the mainly the practice of testing substance on defenseless furry friends — incredibly difficult to suss out, given flaccid labeling requirements — that led Karamazov to the first bulk purchase of the ingredients she needed for her club looks.

Besides, she tells me, “when I was in college there was no brands that had weird colors. If you wanted green lipstick, you had to get clown makeup.” She’s not knocking theatrical brands, but since she wears vivid shades on her face all the time, Karamazov needed something that smelled better, lasted longer, was less greasy than costume products. Glamour is a lifestyle, after all.

After mastering her own mixes, she’d make special blends for birthday presents, whip up a peachy blush for a friend who couldn’t find just the right hue in stores. One thing led to another, and now she’s a business owner, selling colors named after Amanda Lepore and Kanye West songs (“one day all these people will sue me and I’ll know I’ve made it,”) through her site to places as far away as Portugal, Canada, even.

So quickly now, before the camera points in another direction: what kind of looks is Karamazov favoring for these shorter days and longer nights? Darker, vampy hues, she tells me, especially when worn all around the eye. She’s feeling smoky and metallic shades, and only the occasional pop of color. “Mostly really neutral” for fall. And a hint of dewiness, easily attained with a pot of her Champagne in the Bubble Bath highlighter. But only to supplement to your pre-existing glow.