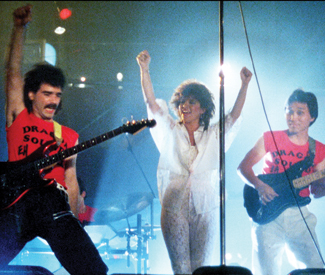 FILM In the 1970s, movies like Dirty Harry (1971) and Death Wish (1974) surprised and raised a certain amount of controversy for being quite so blatantly pro-law enforcement, and anti-scum of the earth — viewing good and bad in such simplistic terms was no longer fashionable, it being more typical to see films about corrupt cops or saintly criminals. With the arrival of the Reagan era, however, it became all black and white again. There was a certain amount of eye-rolling in liberal quarters when Rocky fought communism (1985’s Rocky IV), Brat Pack teens did likewise (1984’s Red Dawn), Rambo fought practically everybody (in films spanning 1982-88), and in 1986, Top Gun‘s Maverick and Iceman played “Who’s got the biggest balls?” like they wanted to do a taste test.

But times had changed very rapidly, and hardly anyone else — certainly no one filling those seats — questioned this cartooned new ultra-machismo as being a little, uh, stupidsville. We seem to be coming full circle back to that era, given recent re-launches of the above franchises, the Expendables movies (an anti-rest home for still-ready-to-‘roid 80s action stars), and a Red Dawn remake suggesting a whole lot of people are ready to find not-funny what they rather astonishingly didn’t find funny the first time around.

But this stuff is funny, at least if you don’t check your brain like a coat before entering the theater. Probably the world’s greatest as-yet-underappreciated treasure trove of cinematic camp lies in the umpteen cheaper knockoffs that were made of those original major-studio hits for the grindhouse, cable, and VHS rental markets.

OK, many of these machine-gunning-patriotism-set-to-power-ballads exercises were just formulaic dreck. But a surprising number (especially anything from the Cannon Group) were hilarious formulaic dreck, like the MacGruber (2010) movie but meaning it. They starred not Stallone, Schwarzenegger, Norris, or Van Damme but people like Cynthia Rothrock, Lorenzo Lamas, Leo Fong, and a whole lot of people who’d won some martial-arts prize or other but couldn’t touch “acting” with a ten-foot barbell. The likes of Cage II: The Arena of Death (1994), Ted V. Mikels’ War Cat (1987), Low Blow (1986), McBain (1991), American Ninja 3: Blood Hunt (1989), and 1986’s Hell Squad (Vegas showgirls vs. terrorists!) are among the best drinking-game movies ever made.

These movies likely have their tiny fan bases. But until recently absolutely no one was a fan of 1986’s Miami Connection — let us just establish the tone by noting this movie takes place in Orlando — because no one had seen it. In the mid-1980s Richard (a.k.a. Woo-sang) Park, an established Korean director who’d recently transitioned to US marital arts movies, saw fellow émigré and taekwondo teacher Y.K. Kim doing a demonstration on TV. He proposed making an action flick together. So the two cooked up a jaw-dropping story, hired a never-to-be-heard-from-again scenarist, cast Kim’s students in most roles, and co-directed what was originally called American Streetfighters. When they were finished, they expected the world to take notice.

The world declined — sales agents and distributors laughed the filmmakers out of their offices. Kim finally arranged Florida bookings himself, yet still Connection died, albeit not before one local critic called it “the worst film of the year.” Even its self-made co-director/star finally had to admit it was at best a big write-off.

But two decades or so later, a curator for Austin’s Alamo Drafthouse Cinema bought a $50 35mm print off eBay, having no idea what it was. It instantly became an object of cult adoration by patrons, and the Drafthouse’s distribution arm now has a midnight phenomenon that’s growing nationwide.

Miami Connection is like 2003’s The Room, in that it’s one of those rare flabbergasting movies which seems to approach its medium as if no one involved had ever seen (let alone worked on) a film before, starring a multi-talent whose performance must be seen to be disbelieved. And who, like Tommy Wiseau, now basks in the belated appreciation of his sole screen vehicle, seemingly oblivious to the precise nature of that appreciation.

The film really is All That. Suffice it to say that Mark (Kim) is one hell of a taekwondo instructor as well as a member of an electro-rock band called Dragon Sound, a “new dimension in rock ‘n’ roll.” This is due to ideas like (actual line here) “We could write another taekwondo song, then after Tom does one of his guitar solos we can all break boards!” When Jane (Kathy Collier) is caught going out with bassist John (Vincent Hirsch) by her creepily possessive drug lord brother Tom (Angelo Janotti), it’s black belt taekwondo rockers versus kickboxing motorcycle-riding bad guys. Before Good triumphs, there is an “International Programming Contest,” spring break-type comedy, a gym full of people making those show-off weightlifting sounds that announce “I am a giant tool,” gratuitous biker-chick toplessness, terrible songs with power-of-positive-thinking lyrics, and much yelled dialogue leading to countless fights, shootings, and stabbings. There is also the parting onscreen message “Only through the elimination of violence can we achieve world peace.” A bit late, that.

Miami Connection‘s clash between low-end but professional basic craftsmanship and batshit-crazy amateur everything else is a never-ending delight. Kim still operates a taekwondo studio in Florida, and has since also become a “philosopher/author/inspirational speaker.” He will not be attending the Roxie’s screenings this week. But as with Mr. Wiseau’s magnum opus, his movie can only snowball in terms of repeat viewers and fresh converts — so eventually, he’s bound to show up in the flesh to be worshipped.

And worship we will.