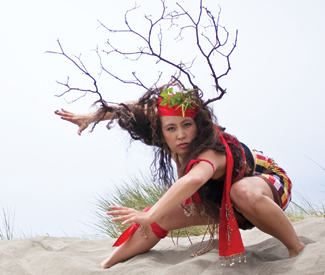 DANCE In the continental United States, the Filipino population is mostly concentrated in California, and it’s a good bet that most are settled in the Bay Area. Still, their voices are not as present in dance — outside the San Francisco Ethnic Dance Festival — as they should be.

Perhaps that’s why Alleluia Panis, executive director of Kularts, a presenter of Filipino art and culture, and Jay Loyola, artistic director of the American Center of Philippine Arts, decided to collaborate two years ago. The new work would not include the ever-popular tinikling, the country’s national dance in which performers nimbly try to avoid clashing bamboo poles that threaten to chop off their feet.

Palau’an Bird Call – Huni Ng Tandikan does, however, include bamboo poles, fashioned into the type of blowguns that so terrified invaders of Palawan, a long, skinny island in the Western Philippines that is settled by the country’s most ancient inhabitants.

As a former member of Bayanihan National Folk Dance Company of the Philippines and creator of over 40 folkloric style choreographies, Loyola got involved in studying the Palawan through some of his students.

“The people are not a very colorful tribe, and they are not very well known, but they have a spirituality that really drew my attention. They don’t even have an exact translation for war,” he explained. Though profoundly Islamic, the Palawan also connect with Buddhism, using in their ceremonies, for instance, the sacred chakras which are supposed to open the body to positive energies.

Because of his commitment to the Palawan culture Loyola was eventually adopted into the Tagbanua tribe, whose members live on the island’s northern section. Their leader told him, “Nobody has ever been interested in us the way you have. You are like a son to me.”

So on a Monday night, when the rest of the US was glued to the tube watching the battle between two men who claimed to be able to restore the country back to health, 16 Filipino dancers, chosen by audition, were rehearsing an ancient ritual about healing the ill head of their tribe.

They were evoking a story based on Francisco Baltazar’s Ibong Adarna, a Philippine epic about the mythic adarna bird — the only creature in the universe that could return both health and peace of mind to a leader. Loyola freely adapted this tale to the Palawan, replacing, for instance, the adarna with the tandikan, a secretive and rarely seen peacock that resides in the forests. He also explored Palawan spirituality that even today is deeply grounded in nature myths. It’s the tandikan’s movements and its song that call the deities into action.

Watching these dancers embody the spirits of water, fire, wind, and the earth, it was striking to note the elegance and power that both men and women poured into their leaps, twirls, and strides. When they descended, they planted their feet as if the ground had reached up to grab them. The steps may be based on traditional patterns — especially a vertical skipping phrase for some of the village women — but these were contemporary artists with strong physical training. If some of the choreography looked influenced by martial arts, it was no accident.

“Because of an ancient land-bridge to Borneo, Palawan culture includes elements of martial arts practices as prevalent on the Indonesian archipelago,” explains Loyola. Perhaps the fiercest dancing — she ended by standing on her head — belonged to Metem Sumpa, danced by Alexandria Diaz de Fato. As a Spirit of Darkness, she almost succeeded in disrupting the healing process.

In contrast to the strong gender differentiation still prevalent in many Western practices, Palawan spirit dancers have to be gender neutral, otherwise the deities will not manifest themselves. So, Loyola says, female performers may be dressed as men.

Another notable element of Loyola’s choreography is that the blowgun, when used on the chakras, is transformed into a tool of healing. So perhaps it was not surprising to find that, after watching this work in progress, a huge storm had washed away the city’s soot — leaving Market Street’s formerly grimy sidewalks positively glistening. *