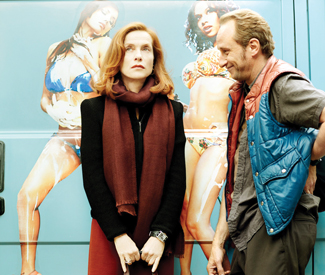 FILM Last year’s The Artist is still glowing months after its multi-Oscar triumph — its canine star just released a memoir, Uggie: My Story, and its human star, Jean Dujardin, will appear in Martin Scorsese’s 2013 The Wolf of Wall Street.

But The Artist had more in common with Hollywood — starting with its setting — than most contemporary French films, which don’t always receive stateside theatrical runs (unless Luc Besson is involved). As you bide your time until Leos Carax’s masterpiece of mindfuckery Holy Rollers arrives Nov. 16, hit the Embarcadero for the San Francisco Film Society’s fifth annual “French Cinema Now” series.

It opens with Noémie Lvovsky’s Camille Rewinds, about a fortysomething woman (Lvovsky, who also co-wrote) who gets a chance at a do-over when she inexplicably wakes up as her teenaged self in 1985. (Yes, it’s been called “the Gallic Peggy Sue Got Married.“) Closing night is Ursula Meier’s well-reviewed Sister, Switzerland’s Oscar entry for Best Foreign Language Film, which stars Léa Seydoux as a woman supported by the petty-thief habits of her 12-year-old brother; if you miss it here, it’ll be in theaters Nov. 9.

The series’ female-centric theme extends into My Worst Nightmare, which follows icy art curator Agathe (Isabelle Huppert) as her airless, tightly-controlled world begins to crumble — thanks in no small part to an exuberantly uncouth, down-on-his-luck Belgian contractor named Patrick (Benoît Poelvoorde), whose mere presence in Agathe’s orbit gives rise to the film’s title. Director and co-writer Anne Fontaine (2009’s Coco Before Chanel) injects plenty of offbeat, occasionally raunchy humor into what could’ve been a predictable personal-liberation tale — the sight of Huppert driving through a bikini car wash, for instance.

There’s no such mirth in Louise Wimmer, the first narrative feature for director and co-writer Cyril Mennegun, though the two films do share parallel stories of characters battling bureaucracy to secure public housing. In Louise Wimmer, it’s an increasingly anxious pursuit for the middle-aged title character (Corinne Masiero), who’s been living in her sputtering Volvo for months. She has a (crappy, part-time) job, but it’s not enough to pay her ever-increasing debts; what’s worse, the goodwill of those who’ve been helping her is starting to wear thin. Masiero’s believably weary performance suggests a woman clinging to the only things she has going for her — resourcefulness and an innate elegance, though both are fading by the day. On her car stereo, Nina Simone’s “Sinnerman” plays on a constant loop, a frantic, powerful tune that moves Louise to weep and, in her most desperate moment, flail around in a solo dance that’s equal parts cathartic and depressing.

Jane Fonda, in her first French film since 1972’s Tout Va Bien, plays a woman who conceals her cancer diagnosis from family and friends in Stéphane Robelin’s All Together (literal English translation, according to the subtitles: And If We All Lived Together?). It’s an ensemble film about a group of seventysomethings who decide to “go all hippie” and share a house — an arrangement that also rescues the less-robust among them (including a man with a weak heart, and one who’s increasingly forgetful) from being shunted into nursing homes. Some of All Together‘s plot points feel forced — as when a young anthropology student moves into the communal house to “study” its inhabitants — but Fonda is a standout as a woman who faces the end with remarkable reserves of cheer and dignity. In addition to its “French Cinema Now” appearances, the film also opens Oct. 26 at the Christopher B. Smith Rafael Film Center.