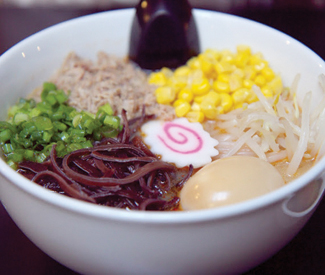 APPETITE The nuances and clean lines of Japanese cuisine have long intrigued me. I grew up on the East Coast with my lifelong best friend, who is of Japanese descent, discovering authentic cuisine in her home and around New York City. I fondly recall the first time I had sushi, okonomiyaki, sake, and shabu-shabu. San Francisco boasts one of few Japantowns in the US — the oldest and largest Japantown in the country, in fact — one of the reasons to love living here. Sushi is one of my greatest cravings, and the izakaya pub-bar food wave seems to hit SF every few years, with a slew of openings.

Opened this summer, Camp BBQ’s Japanese grilling takes its cues from Korea. The long space is lined in rustic Japanese woods, roomy tables surrounding individual grills. Like Korean BBQ, mini-bowls of dipping sauces such as house miso arrive, then platters of vegetables, including a “rainbow mix” ($6) of carrots, bok choy, onions, and garlic cloves wrapped in foil, ready for the grill. Scallops soak in garlic butter ($7), tender and buttery in foil. When it comes to meats, there are many options, sliced thin, generally tender — only the pork cheek, though juicy, was a little tough to bite. Kobe-style Kalbi chuck short rib ($13 for 3.5 ounces) and ox tongue ($8) are two worthy beef options, though I find the cheaper, savory qualities of spicy pork ($4) and pork cheek ($5) even more appealing. Portions are small enough to mix-and-match while sipping sake, Japanese beer, even pineapple or watermelon slushies. Moving away from the grill, cheese pockets ($5), essentially wontons supposedly filled with cream cheese and shrimp, are disappointingly empty. The setting is mellow with families and friends grilling and singing along to somehow appropriate dance pop tunes as backdrop.

Hot pot stylings of shabu-shabu are the basis for Shabuway, the first SF location of a local Bay Area chain that began in 2004 in San Mateo, growing to locations in Mountain View, San Jose, Union City, Santa Clara. Eiichi Mochizuki launched Shabuway using meats from animals fed on an all-vegetarian diet: Angus Prime, American Kobe, Niman Ranch lamb, Kurobuta Berkshire pork. The result translates into a fresher-than-average shabu experience. In keeping with the meaning of shabu-shabu (“swish-swish”), one selects thinly-sliced meat of choice, chooses spicy miso or seaweed broths, then swishes raw meats in boiling broth until done. Vegetables (cabbage, carrots, enoki mushrooms, etc.) and mini-bowls of soy and crave-inducing gomadare (an almost creamy sesame sauce) arrive, filled when running low, with add-ons like udon or ramen noodles a mere $1–$1.75. When you’re finished cooking the meats and veggies, flavor-rich broth is poured over rice, eaten soup-like as a finish. There is little besides shabu-shabu on the menu, an appreciated focus — but a special I’d recommend if you see it is takoyaki ($4.50), octopus dumpling balls topped in benito flakes, essentially okonomiyaki (the fantastic Japanese “pancake”) in bread-y ball form, dotted with customary mayo and savory-sweet okonomiyaki sauce.

Ramen is akin to pho in Vietnamese food or other filling soups in Asian cuisine. Maybe it’s my craving for bold, pronounced flavors that have made me not so much averse to basic broth soups as just bored by them. I typically prefer udon or soba noodles when it comes to Japanese soups for more texture and emphasis on the noodles and may never be obsessed with ramen, pho, or the like. But Kirimachi Ramen, a month’s old spot tucked away in North Beach with 1950s diner chairs and laid back vibe, does well by the genre. All bowls are hefty at $10, with veggie, pork, or chicken as a base. The staff told me they haven’t found a reliable organic pork source yet, but use Marin Sun Farms chicken, focusing on fresh ingredients. I took to Sapporo-style miso ramen with chopped pork, Chinese chives, bean sprouts, corn, with additional toppings ($1) including kikurage mushroom, fish cake, and soft-boiled egg.