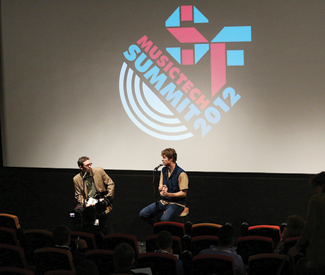 MUSIC Can the declining sales from physical albums ever be replaced by digital music apps and services? Can an independent artist make a decent living from services such as Pandora radio, BAMM.TV, or SoundCloud? Will the starving musician finally get a good meal?

These questions may be answerless for now, but they maintained a heavy presence at the SF Musictech Summit hosted by the Hotel Kabuki — a semiannual conference dedicated to establishing a network among entrepreneurs, developers, record industry figures, and musicians in order to promote digital music business and find solutions for the issues plaguing the modern music industry.

Last week’s installment of the summit featured five talks — in panels with labels like “How Technology Destroyed the Music Industry” and “Artist Revenue Streams.”

It also brought some star power. Actor-musician Jared Leto’s interest with this budding industry brought him to the summit too. And despite the formal nature of the occasion, the 30 Seconds to Mars front person was besieged by attendees eager to get his take on the event, and his autograph. He told me that he’s “curious as to what solutions are being presented.”

But as the summit carried on, it became very became apparent that there are perhaps too many of these solutions being offered. In one of the early morning talks entitled “Artist Tools” moderator Hisham Dahud from Hypebot and Fame House kicked off the conversation by mentioning many of the new ways bands can distribute and promote their music and interact with their fans but also opined that “with new tools comes new responsibilities.”

During the discussion, Rennie’s stance was welcoming of the technological development, but later, when I asked him if the new digital music business could provide substantial income for the artist, he said, “I sure hope so. The fact is that more people are listening to music than ever but they are doing it different ways, including listening without buying…as people move to other formats like digital downloads and streaming services, we need more people to get comfortable with the idea that music has value and is worth paying for…We need to convince people that their favorite music is worth buying just as much as the beer they’ll spend $10 on at a concert or sporting event.”

The motivation and excitement to transform nearly every aspect of the music business was palpable at the summit. Elevator pitches were as ubiquitous as iPhones and Macbooks. However the fresh idealism was notably absent at the “Artist Revenue Streams” talk where musician Erin McKeown took center stage detailing the sobering situation independent musicians face, explaining that some obvious solutions aren’t so great

But more importantly, McKeown emphatically addressed the one crucial issue that was sorely lacking attention throughout the conference: how are musicians suppose to keep up with and derive income from the rapidly evolving environment of music technology? Others on the panel brought up the fact that a lot of artists are unaware of nonprofits such as SoundExchange — an organization with the main goal of compensating artists for their royalties.

The Internet has been lauded as the great democratizer of this generation, and the adage was especially poignant for this specific realm of the digital world. Cellist and composer Zoë Keating, who spoke at the “Artists, Entrepreneurs & Technology,” panel expressed that digital music business caused her to be optimistic and it’s a more level playing field that’s “better for indie artists.” Keating has posted her 2011 income streams on her Tumblr to give her fans a glimpse of the financial situation her and other independent artists are grappling with.

No one seemed more interested in seeing the old music business vanquished than TuneCore founder (and former CEO) Jeff Price, who emphatically declared, “Artists never made any fucking money! What fucking world are you living in?!…The music industry is not collapsing, the traditional music industry is collapsing!” *