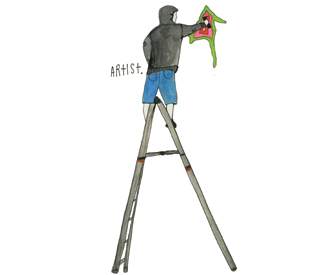 People marvel that I manage to live in San Francisco on what I make as a freelance writer. They wonder if I have a trust fund, secretly write speeches for CEOs, or run a phone-sex business on the side. They figure I must somehow make over six figures to live in a three-bedroom flat in the Haight with high ceilings, hardwood floors, a big kitchen, and a garden as big as a park.

No: I’m able to be a writer in San Francisco because of rent control.

If it weren’t for rent control, I would not live in the city I love, which has been my home since 1984, when I scored an apartment on Waller Street with one woman I’d met in a magazine collective called Processed World and another who’d just gotten off the Green Tortoise bus.

At first I wasn’t sure I wanted the apartment. It was filthy; the living room had been subdivided into four sections with hanging sheets, and only cockroaches dared to enter the kitchen. It was $750 a month, which seemed astronomical to us at the time. But it was so rundown that no one had ever bothered to rip away the original wainscoting, Victorian cabinets, hardwood floors, or clawfoot tub, so it had a lot of charm under its grime. The landlord — an entrepreneurial hippie who bought about ten buildings when the Haight was at its most depressed — insisted we do community service as part of our rent. We pooled our money, took the place, and began scrubbing and painting.

Over the years, by sheer luck, I never moved. Instead, people moved in with me. I lived with a constant parade of roommates, most of them artists or people who worked for nonprofits. There was a drummer, a guitarist, and a composer. Maria was a young journalist from Mexico City who came here to write about migrant farm workers. Stevious was a political refugee from South Africa who worked at Mother Jones. Gail was a chef who left to join the circus. Natalie taught English to new immigrants. Julia was an avant-garde theatre director. Danielle was a filmmaker who wanted to make a documentary about Ghana, where she’d lived in the Peace Corps. Vince worked for the alternative press. All these people had moved to San Francisco because they wanted to do something creative or humanitarian, and to Waller Street, because our rent made that possible.

During the dot-com boom, my flat became a refuge. Two friends, a photographer and a musician, had been effectively evicted by a landlord who made life so hellish they’d leave, so he could raise the rent at a time when Mission rents went up 40 percent in a year. They had nowhere to go, so they moved in with me. It was a very San Francisco story: the guy was my great-grand-ex, who used to live in the flat above me when we dated, and now he was living in my house with his girlfriend. We cooked and played music and got along fine, until they moved into a flat they could afford — in Oakland.

Until the dot-com years, thanks to rent control, you could make a living as an artist or activist and manage to live in San Francisco, even if it meant eating a lot of burritos. Today, that’s not possible, unless you’re as old as I am and somehow had the luck to hang on to the second apartment you moved into after college. I may envy people who had the foresight to buy real estate in the 1980s or 1990s, but the fact is, I didn’t have the money then, either, for what now seems like a laughably low down payment. Rent control is my equity. The neighbors who live in the mirror-image apartment in my building are not artists or activists; they are tech people, whose rent is double mine, and who do make six figures.

Recently, a talented young novelist visited my flat and was amazed at how spacious it is. He’s struggling to keep on living in San Francisco, and I don’t know how he and his wife manage writing and running an international creative nonprofit while paying our city’s rents, especially with a child. I do know that unless San Francisco makes room for people like him, as it made room for me, with rent control, we will lose the distinctive character of our city—or what remains of it. Rent control made it possible for me to be a writer, but 25 years later, it’s a lot harder for him.

Rent control is essential to keeping San Francisco’s creative character. But it isn’t sufficient if the city wants to help young people who are trying to embark on creative careers outside of the tech sector in San Francisco today. We need affordable housing; we need rent controls to extend to vacant apartments; mainly, we need to want to keep San Francisco weird.

Laura Fraser is the author of the New York Times bestseller An Italian Affair, among other books.