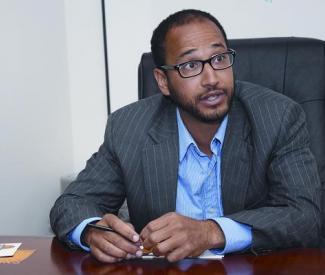 EDITORIAL Kay Vasilyeva, a member of the San Francisco Women’s Political Caucus, has come forward with the allegation that District Five candidate Julian Davis grabbed her and put his hand down her pants at a political bar crawl in 2006. That was six years ago, but it’s still important — and more than the incident itself, the response we’ve seen from Davis is highly disturbing. He’s utterly denying that it ever happened, and retained a lawyer to send Vasilyeva a letter threatening her with legal action if she continues to talk.

While we endorsed Davis for supervisor, we take these charges very, very seriously — particularly coming at a time when relations between men and women in the progressive movement are badly strained.

Since the SF Weekly, which broke the story, suggested that we knew something about Davis’s behavior, we need to state, for the record: When we endorsed Davis, we had heard nothing even remotely close to this type of allegation. Yes, we knew that in his 20s he was a bit of an arrogant ass. We knew that at one point, he actually got into a tugging match with another person over the ridiculous question of who got to hold a campaign sign. We’d heard that, in the past, at somewhat debauched parties, he’d made advances toward women who weren’t interested in his affections.

Those could be the acts of an immature man who has since grown up. And since, on a level of policy, knowledge, and positions, he was by far the best and strongest progressive in the race in District 5, we — along with much of the local progressive leadership — thought he was demonstrating enough maturity that he was worthy of our support.

But this new information, and his response to it, is alarming.

We don’t take last-minute allegations about a front-running candidate lightly; people have been known to dump all sorts of charges into heated races. When we learned about Vasilyeva’s allegations on Oct. 13, we did our own research. We spent two hours with Davis and his supporter and advisor, former D5 Supervisor Matt Gonzalez. We realized that allegations without corroboration are just charges, so we tracked down everyone we could find who might know anything about this incident — and, as we discovered, other similar events. And we have to say: Vasilyeva’s account rings true. Davis’s categorical denial does not.

More than that, we were offended that he in effect threatened with a lawsuit a woman who, at some peril to herself, came forward to tell the public information about someone who is running for elected office. What was the point of that, if not to intimidate her? It’s highly unlikely he’s going to sue (and drag this whole mess into court). He says he was just trying to send a message that he has a legal right to respond to defamation, but this is a political campaign; if he didn’t want to deal publicly with what he must have known were these sorts of potential allegations, he shouldn’t have run for office.

This is a bad time for progressives in San Francisco. The Mirkarimi case has brought to the fore some deep and painful rifts; a lot of women feel that (mostly male) progressive leaders have pushed their issues to the side. For the future of the movement and the city, the left has to come together and try to heal. This situation isn’t helping a bit.

Davis needs to face facts: Supervisors John Avalos and David Campos have withdrawn their endorsements. Assembly member Tom Ammiano is almost certain to do the same. With his inability to handle the very credible charge that he not only groped a woman but lied about it, Davis no longer has a viable campaign in the most progressive district in the city, and we can’t continue to support him.

We have said it many times before: People on the left need to be able to put their own ambitions aside sometimes and do what’s right for the cause. Davis can’t win. He’s embarrassing his former allies. He needs to focus on coming to terms with his past and rebuilding his life. And for the good of the progressive movement, he needs to announce that he’s ending his campaign, withdrawing from the race, and urging his supporters to vote for another candidate.