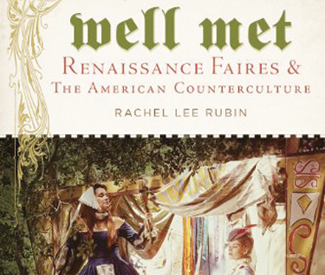 CULTURE For any of you (guilty!) who have a kneejerk gag-reflex reaction upon hearing the words “Renaissance Faire,” but can’t quite pinpoint the source of your disdain, author Rachel Lee Rubin breaks it down for you three ways: fear of men in tights, fear of voluptuous women squeezed into revealing outfits, and fear of being engulfed by nerd culture. That third category of Renaiphobia includes my own personal terror, being approached by a merry fool and loudly addressed in “castle talk,” that peculiar grammatical melange which embodieth the thithermost in Faire-y frippery. (I would also add another fear: that of hepatitis A, which my husband’s high school friend contracted from a woefully undercooked giant turkey leg.)

“Part of Renaissance Faire culture is inextricably intertwined with this adjacent culture of Renaissance Faire haters,” Rubin told me over the phone from her office in Cambridge, Mass. “I spent so much time among the trolls on Internet message boards, it really hurt my feelings!”

The fascinating, forthcoming Well-Met: Renaissance Faires and the American Counterculture (NYU Press, release date November 19), a study of the phenomenon and its political and cultural echoes by Rubin — a professor of American Studies at the University of Massachusetts, Boston — just might temper any Renaissance indigestion. Its deep and compelling tale of the Faire’s reach, much of it emanating from a specifically Californian aesthetic of soft-golden attitudes and ecstatic liberal expression, certainly had me revisiting some of my own preconceptions, even yearning to be part of the revelry. Somebody polish me a codpiece!

Next year will mark the 50th anniversary of the Faire. (This year’s monthlong Northern California Renaissance Faire in Hollister winds down Sat/13-Sun/14). Amazingly, Well-Met is the first comprehensive historical and anthropological study of the festival, although an official 50th jubilee commemorative album is set to be published next year (www.rpf50book.com).

The Faire’s tale begins with a young Laurel Canyon teacher’s quest to teach her charges at the local community center the history of theater, including the Italian Renaissance form of commedia dell’arte, the rowdy, harlequin-speckled, lute-sountracked populist traveling-theater tradition, a mixed-up version of which the Faire would soon become most identified with. But Phyllis Patterson’s idea of putting on a community festival, dubbed the Renaissance Pleasure Faire, soon became a flashpoint for several cultural and political currents of the time, not least the blacklisting of Hollywood professionals by the House Un-American Activities Committee (with all that out-of-work talent, the first Ren Faire served as both a showbiz bonanza and a backlash to Communist witch hunts); a turning away from mass-produced goods and the harmful effects of global commercialism (with an emphasis on handmade crafts and local community); and the incubation stage of the hippie, including the Faire’s soft-focus, wild-and-free English pastoral style of clothing, soon found donned by top pop minstrels, from the Byrds and the Monkees to the Beatles and the Isley Brothers.

“Even now, the spectre of the long-haired hippie looms in many older conservative minds. And he — it is always a he — belongs to the aesthetic of the Renaissance Faire, guitar in one hand, flower in the other,” Rubin told me.

Also involved in the Faire’s history was the reinvention of theater — the New Vaudeville, including such bigtimers as Firesign Theater, the Flying Karamazov Brothers, Pickle Family Circus, and Bill Irwin — plus the explosion of public community radio (LA’s KPFK and our own KPFA owe much of their golden years to the Faire), and a revisionist historical movement in education. Rubin traces the New Left political movement’s break with the Old Left to the Faire’s liberating effect. But mostly the Faire operated as America’s freak magnet, the most visible manifestation of the counterculture emerging from the conformist 1950s — and a safe space for outsiders of all types.

“Again and again, people told me how the Faire made them feel safe,” Rubin said. “Vietnam veterans told me it was only at Faire that they felt welcome back in the country. There was a huge gay and lesbian presence from the beginning, and the bawdiness encouraged there attracted different sexual expressions. Class difference, too, could be left behind. The costuming echoed that of the masquerade, where a certain amount of anonymity — a shedding of the self at the gates, which is a very important ritual at the Faire — opened up new possibilities.

“The central paradox of the Faire is that it allows you to be more yourself while being someone else.”

Another paradox is the overwhelming anachronism of the Faire — starting with those emblematic turkey legs and continuing through the revealing custom-made chain mail “wench wear” that’s lately become all the rage among female Faire regulars (“playtrons” in castle talk). Somehow, reimagining the historical past makes the Faire more authentic.

“The inspiration to write this book actually came when I took an English friend to one of the fairs,” Rubin said with a laugh. “He was horrified: ‘what have you done to my country’s history?’ And yes, it’s called the Renaissance Faire, but it’s really the idealization of probably 10 years of the whole historical period, in England, and only very select parts of that. But the central notion of the festival is play — even a play on the meaning of ‘renaissance’ itself. It’s almost like steampunk’s relationship with the Victorian era. Except that steampunk starts with one historical period and imagines the future, whereas the Renaissance Faire imagines the past.”

And of course the one constant of every historical endeavor is change. The Faire is now a national institution with a broader appeal than ever. After functioning as an artistic haven in the 1960s and a working class escape in the late ’70s and ’80s (the titillating “freakfest” alternative to Six Flags’ “redneck Disneyland”), it’s lately settled into the role of suburban theme party and gamer-nerd paradise. But that’s changing as well.

“The video game role-players are still there, but the faire doesn’t seem to resonate as much with the current tech crowd, which may be more attracted to material gain than fantasy escapism,” Rubin said. And many regular playtrons are dismayed at what they see as the Disneyfication of the Faire. “Even as a suburban and working class phenomenon, the Faire always functioned as an alternative narrative to everyday life. But now we’re seeing more ‘handmade crafts’ manufactured in China and attempts to corporatize the Faire on larger levels. There has always been an argument about authenticity among playtrons, but now there are more contemporary forces affecting the Faire.”

Yet the original spirit of transformation and togetherness persists. For Well-Met, Rubin visited dozens of Faires across the country, not only documenting several intriguing regional differences but also talking to dedicated playtrons about their personal experiences at the Faire. What emerges is a candid family portrait, full of self-aware whimsy, goofy charm, and awkward situations. (Rubin speaks with playtrons of color about the faire’s often ethnically challenged demographics and writes about the widening of the Faire’s aesthetics to include Islamic World elements, in acknowledgment of the actual Renaissance’s roots.)

Also persistent: the wilder, bawdy side, especially on the last day of many Faires, when parents are warned and much of the self-censorship vanishes, like mead from a sterling goblet gripped by hairy Hobbit knuckles. Profane insults and hilariously vulgarish displays fill the fairgrounds. Will that be the case on Sun/14 at the NorCal Ren Faire? Squeeze yourself into corset and tights and come findeth out.