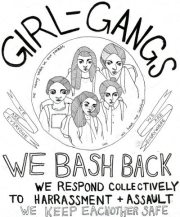 Oakland’s last feminist vigilante gangs march was a demonstration promoting offensive feminism in response to rape, assault, and murder of “women, queers, gender rebels and allies.” It was also a birthday party.

“The first march basically came about because it was my 30th birthday,” said Lauren, one of the organizers of that march and a second feminist vigilante gangs march, which will take place in Oakland on Friday.

Last time, a group, equipped with and radical queer and feminist literature, banners, and glitter, marched from the “fake neighborhood” of uptown Oakland to downtown Oakland, Lauren said, ending with a dance party in “Oscar Grant Plaza,” Occupy Oakland’s longtime home base outside City Hall.

Along the way, organizers “stopped at some places to talk about things have had happened there,” said Lauren. “For instance, the place where Brandy Martell was killed.”

Brandy Martell was transgender woman who was shot April 29. Her murder remains unsolved. Martell’s is a “a high-profile case of transgender bashing. She died, and so we know about. But these types of things happen everyday on the streets in Oakland,” said Lauren.

The next feminist vigilante gangs march begins Friday at 7pm from 19th and Telegraph. It will also stop at the spot where Martell was killed, as well as other spots where queer bashing, rape and assault have taken place.

Lauren says the march is a few things. It’s a call-out “encouraging women, queers, gender outlaws in the Bay Area to start thinking offensively about the abuse that we’re on the receiving end of.”

It’s also “a way for us to practice discipline in the streets. Because we live in a culture that’s so abusive towards women, queers, gender variant people, its really hard for us to form affinities.”

The group plans for a tightly organized march. A security team and a league of bike scouts to protect the march have already begun training, and before the march begins a generalized security training is planned. Anyone who arrived alone will be given the chance to hook up with a marching buddy. Street medics and “emotional medics” from the Occupy Oakland safer spaces working group– “people who have some training to interact with people who are experiencing PTSD or who are experiencing emotions that are making it difficult for them to participate”– will be on hand.

“We have a bloc that is set up for people with limited mobility, that’s wheelchair users, cane users, people using walkers,” Lauren said.

Organizers of the march hope that its spirit and practice of community building and self-defense can extend to the everyday lives of participants.

One way is by connecting demonstrators “with the resources to begin things like self-defense training, especially in a feminist and collective environment,” Lauren said. Groups like the Offensive Feminist Project, the Suigetsukan Dojo, and Girl Army.

“Something that we should be creating in marginalized communities is community self-defense. That’s something that the Black Panthers worked on. It’s not a new concept, in Oakland we have a lot of history with that,” said Lauren.

Community self-defense, of course, is supposed to be unnecessary; crime prevention and retribution is supposed to be relegated to the police and the criminal justice system. But Lauren said that these institutions are not working.

“I don’t believe that the criminal justice system is just, or serving anyone. And I think that’s a perspective shared by the people who are organizing the march, and probably by most of the people who will attend it,” she said. “I say this as someone who’s watched the police interrogate a rape victim and– interrogate is the correct word. There’s no justice in the criminal justice system for victims of rape and assault. So we want to talk about extra-legal methods of dealing with these issues.”

Extra-legal means of dealing with violence, she says, is “what feminist vigilante gangs is all about.”

After the march, organizers plan to continue this conversation at “a series of plenaries and salons in the East Bay” where participants will discuss questions like “What does feminist vigilantism look like?” Lauren said.

“As these conversations continue we will be spending a lot of time focusing on issues like race, and things like the history in the United States of falsely accusing men of color of assaulting white women so that they can be imprisoned or abused or killed,” Lauren said.

The group also has an open call for entries for a feminist vigilante gangs zine, for those who want to continue the discussion on paper. “People have been writing about bashing back. The Bash Back book Queer Ultraviolence just came out this year,” she noted.

Still, many people have not been exposed to the ideas and practices behind the feminist vigilante gangs march. On Friday, a lot of people will be– the march will coincide with Art Murmur, and downtown Oakland’s streets will already be crowded. A contingent from GLITUR, aka the Grand Legion of Incendiary and Tenacious Unicorn Revolutionaries, is coming down from Seattle. This march might get big.

But never fear, Lauren assured: “We should have enough glitter bandanas for everyone who comes.”