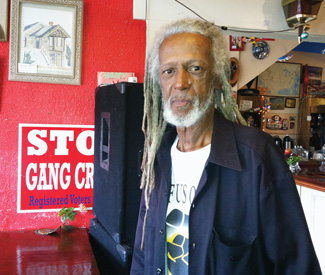 HERBWISE The night before our interview, Elder Freeman spoke alongside Peace and Freedom Party presidential candidate (and beloved sitcom sassmouth) Roseanne Barr, 2008 Green Party candidate Cynthia McKinney, and others about the political possibilities of marijuana at a panel discussion held inside Oaksterdam University.

As Black Panther History Month begins, commemorating the 46th anniversary of the party’s founding by Freeman and his peers — see info on events at the end of this article — it seems only fitting that the cannabis movement and the Panthers’ struggle for social justice and the right to control our own communities be connected. For Freeman, the two have become inextricably linked.

The morning of the day we met at West Oakland’s Revolution Cafe, the 67 year old original member of LA’s Black Panther Party had two doctors appointments. Freeman has colon cancer. Three years ago, he was diagnosed with prostate cancer. He smokes marijuana to improve his appetite — he’s used to eating a single meal a day, but that’s not enough to keep up his strength during treatment. As a long-time 215 card-carrier, the last year’s federal crackdown on cannabis dispensaries threatens to send him back to buying pot on the streets.

Is access to marijuana a Black Panther issue? Freeman thinks so. He tells me why over a cup of coffee (cream, no sugar), and between interruptions by well-wishers — the entire neighborhood knows him, it seems, they all want to pay their respects.

“It’s all connected. The simple fact is that the judicial system is inadequate. The whole idea that they want to keep it in an illegal state is so that they can criminalize people.” He became aware of cannabis, he says, when Bob Marley started talking about its connection to non-violence. “I identified with the Rasta community for awhile,” he tells me.

Freeman’s been told that this current bout of cancer is incurable. But he’s also been told that the Watts uprising in 1965 that was responsible for his political awakening was actually riots and that he deserved to spend those seven years in jail alongside many of his Panther cohorts on a laundry list of mostly trumped-up charges. He didn’t buy those things either.

In fact, at Oaksterdam he shared with the crowd that he plans on going to Cuba for a second opinion on his medical treatment. “There’s something about American medicine that seems to be lacking,” he says.

Last night’s event was actually the first time Freeman spoke as a cannabis activist. He spends most of his time as an advocate these days working for inmate rights — not surprising when you consider he spent the better part of a decade as a political prisoner. He works with All of Us or None (www.allofusornone.org), a national organization that works to “ban the box” — remove questions about past incarceration from employment applications — promote inmate voting rights, and build awareness in the communities most affected by mass incarceration. So although personally, access to cannabis is clearly a health concern, he tends to speak about it with more a law and order focus.

“People are doing a lot of time for something that they shouldn’t even be in jail for.” He wonders out loud to me about why we don’t lock up cigarette producers. “They got it backwards. But that’s capitalism.”