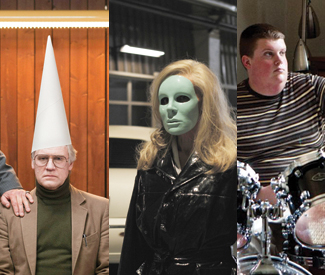 On the Road (Walter Salles, US/France/UK/Brazil, 2012) Walter Salles (2004’s The Motorcycle Diaries) engages Diaries screenwriter Jose Rivera to adapt Jack Kerouac’s Beat classic; it’s translated to the screen in a streamlined version, albeit one rife with parties, drugs, jazz, danger, reckless driving, sex, philosophical conversations, soul-searching, and “kicks” galore. Brit Sam Riley (2007’s Control) plays Kerouac stand-in Sal Paradise, observing (and scribbling down) his gritty adventures as they unfold. Most of those adventures come courtesy of charismatic, freewheeling Dean Moriarty (Garrett Hedlund of 2010’s Tron: Legacy), who blows in and out of Sal’s life (and a lot of other people’s lives, too, including wives played by Kristen Stewart and Kirsten Dunst). Beautifully shot, with careful attention to period detail and reverential treatment of the Beat ethos, the film is an admirable effort but a little too shapeless, maybe simply due to the peripatetic nature of its iconic source material, to be completely satisfying. Among the performances, erstwhile teen dream Stewart is an uninhibited standout. Thu/4, 6:30 and 6:45pm, Smith Rafael. (Cheryl Eddy)

Road North (Mika Kaurismäki, Finland) Mika Kaurismäki’s films are generally much more broadly accessible than the dryly minimalist ones of his brother Aki, yet the latter has by far the larger international audience. That might change a bit with this likable seriocomic road trip. Emotionally recessive concert pianist Timo (Samuli Edelmann) is less than delighted one day to find an uninvited guest slumped outside his apartment: the father who abandoned him 30-odd years earlier. Far from having improved himself in the interim, Leo (Vesa-Matti Loiri) is a corpulent slob, convenience store robber, and car thief. But he is insistent in dragging his son on a journey whose full purpose he won’t reveal until its end. Actually, you can guess where it’s headed — but getting there is full of surprises, some touching and some very funny. Fri/5, 9pm, Smith Rafael; Sun/7, 6pm, Sequoia. (Dennis Harvey)

Fat Kid Rules the World (Matthew Lillard, US) It really does suck to be Troy (Jacob Wysocki from 2011’s Terri). An XXL-sized high schooler, he’s invisible to his peers, derided by his little brother (Dylan Arnold), and has lived in general domestic misery since the death of his beloved mother under the heavy-handed rule of his well-meaning but humorless ex-military dad (Billy Campbell). His only friends are online gamers, his only girlfriends the imaginary kind. But all that begins to change when chance throws him across the path of notorious local hell raiser Marcus (Matt O’Leary), who’s been expelled from school, has left the band he fronts, and is equal parts rebel hero to druggy, lyin’ mess. But he randomly decrees Troy is cool, and his new drummer. Even if he’s just being used, Troy’s world is headed for some big changes. Actor Matthew Lillard’s feature directorial debut, based on K.L. Going’s graphic novel, is familiar stuff in outline but a delight in execution, as it trades the usual teen-comedy crudities (a few gratuitous joke fantasy sequences aside) for something more heartfelt and restrained, while still funny. O’Leary from last year’s overlooked Natural Selection is flamboyantly terrific, while on the opposite end of the acting scale Campbell makes repressed emotion count for a lot — he has one wordless moment at a hospital that just might bring you to the tears his character refuses to spill. Sat/6, 3pm, Sequoia; Oct. 11, 7pm, Smith Rafael. (Harvey)

The Central Park Five (Ken Burns, US) Acclaimed documentarian Ken Burns takes on the 1989 rape case that shocked and divided a New York City already overwhelmed by racially-charged violence. The initial crime was horrible enough — a female jogger was brutally assaulted in Central Park — but what happened after was also awful: cops and prosecutors, none of whom agreed to appear in the film, swooped in on a group of African American and Latino teenagers who had been making mischief in the vicinity (NYC’s hysterical media dubbed the acts “wilding,” a term that became forever associated with the event). Just 14 to 16 years old, the boys were questioned for hours and intimidated into giving false, damning confessions. Already guilty in the court of public opinion, the accused were convicted in trials — only to see their convictions vacated years after they’d served their time, when the real assailant was finally identified. Using archival news footage (in one clip, Gov. Mario Cuomo calls the crime “the ultimate shriek of alarm that says none of us are safe”) and contemporary, emotional interviews with the Five, Burns crafts a fascinating study of a crime that ran away with itself, in an environment that encouraged it, leaving lives beyond just the jogger’s devastated in the process. Sat/6, 3:30pm, Smith Rafael; Mon/8, 3:15pm, Smith Rafael. (Eddy)

Rebels with a Cause (Nancy Kelly, US) The huge string of parklands that have made Marin County a jewel of preserved California coastline might easily have become wall-to-wall development — just like the Peninsula — if not for the stubborn conservationists whose efforts are profiled in Nancy Kelly’s documentary. From Congressman Clem Miller — who died in a plane crash just after his Point Reyes National Seashore bill became a reality — to housewife Amy Meyer, who began championing the Golden Gate National Recreation Area because she “needed a project” to keep busy once her kids entered school, they’re testaments to the ability of citizen activism to arrest the seemingly unstoppable forces of money, power and political influence. Theirs is a hidden history of the Bay Area, and of what didn’t come to pass — numerous marinas, subdivisions, and other developments that would have made San Francisco and its surrounds into another Los Angeles. Sat/6, 6:15pm, Sequoia; Tue/9, 4pm, Smith Rafael. (Harvey)

The Sessions (Ben Lewin, US) Polio has long since paralyzed the body of Berkeley poet Mark O’Brien (John Hawkes) from the neck down. Of course his mind is free to roam — but it often roams south of the personal equator, where he hasn’t had the same opportunities as able-bodied people. Thus he enlists the services of Cheryl (Helen Hunt), a professional sex surrogate, to lose his virginity at last. Based on the real-life figures’ experiences, this drama by Australian polio survivor Ben Lewin was a big hit at Sundance this year (then titled The Surrogate), and it’s not hard to see why: this is one of those rare inspirational feel-good stories that doesn’t pander and earns its tears with honest emotional toil. Hawkes is always arresting, but Hunt hasn’t been this good in a long time, and William H. Macy is pure pleasure as a sympathetic priest put in numerous awkward positions with the Lord by Mark’s very down-to-Earth questions and confessions. Sat/6, 7pm, Smith Rafael; Sun/7, noon, Sequoia. (Harvey)

Jayne Mansfield’s Car (Billy Bob Thornton, US) Billy Bob Thornton’s first directing gig in over a decade is an ensemble piece set in small-town 1969 Alabama — like every U.S. town at the time, a hotbed of generational conflict over the Vietnam War and the generally changin’ times. Particularly defining that gap is the squabbling relationship between hawkish patriarch Jim Caldwell (Robert Duvall) and youngest son Carroll (Kevin Bacon), who — though a World War II veteran, like brother Skip (Thornton) — has appointed himself a sort of elder to the local hippie population. That alone is enough to set Jim’s teeth on edge; he’s put in an even crustier mood upon hearing that his ex-wife has died, and her corpse is being brought back from England by the new family (John Hurt, Ray Stevenson, Frances O’Connor) she’d acquired after leaving him. The awkward meeting between two very different clans quickly thaws in various ways, however, some sexual, some comradely. Dismissed as a garrulous mess in its other festival showings to date, this Car is indeed one rusty, leaky, wayward vehicle at times, with some forced situations and way too much speechifying in the director’s script (co-written with Tom Epperson). But the thematically over ambitious, structurally clumsy movie is watchable nonetheless, with some real strengths: most notably strong performances (especially Thornton’s own) and a real feel for a particular high-Southern Brahmin milieu that hasn’t changed much more in the last 40 years than it did in the prior 40. Thornton will receive the MVFF Award and be interviewed onstage at the film’s screening. Sun/7, 6:30pm, Smith Rafael; Oct. 14, 5pm, Smith Rafael. (Harvey)

Ricky on Leacock (Jane Weiner, France/US) Shot over the last 40 years, since she was her subject’s student, Jane Weiner’s film about globe trotting director-cinematographer Richard Leacock is a fond tribute that pays due respect to the latter’s innovations in the documentary form. Dismayed by the lack of spontaneity that cumbersome equipment forced on the genre, he began devising a series of lightweight, synch-sound cameras that could unobtrusively travel with and capture events as they occurred. While his own mostly TV-targeted fruits of that labor are relatively little-known today, their impact on nonfiction cinema was enormous — and Leacock, who died last year at 89, was clearly charming company. Sun/7, 7pm, Smith Rafael; Mon/8, 9:15pm, 142 Throckmorton. (Harvey)

In Another Country (Hong Sang-soo, Korea) This latest bit of gamesmanship from South Korea’s Hong Sang-soo (2000’s Virgin Stripped Bare by Her Bachelors) has Isabelle Huppert playing three Frenchwomen named Anne visiting the same Korean beachside community under different circumstances in three separate but wryly overlapping stories. In the first, she’s a film director whose presence induces inapt overtures from both her married colleague-host and a strapping young lifeguard. In the more farcical second, she’s a horny spouse herself, married to an absent Korean man; in the third, a woman whose husband has run away with a Korean woman. The same actors as well as variations on the same characters and situations appear in each section, their rejiggered intersections poking fun at Koreans’ attitudes toward foreigners, among other topics. Airy and amusing, In Another Country is a playful divertissement that’s shiny as a bubble, and leaves about as much of a permanent impression. Tue/9, 4:15pm, Sequoia; Oct. 12, 9:45pm, Smith Rafael. (Harvey)

To Kill A Beaver (Jan Jakub Kolski, Poland) Furtive, paranoid, solitary Eryk (Eryk Lubos) returns from places unknown to prepare his dilapidated farmhouse for a mission that, for a long time, remains equally unclear. Veteran Polish director Jan Jakub Kolski’s enigmatic drama takes its time unfolding the mysteries of Eryk’s traumatic past, unstable present, and future purpose. He’s all suspicion when he finds local teen Bezi (Agnieszka Pawelkiewicz) trespassing on his property, but her brazen come-on and hidden vulnerabilities chip away at his ample defenses. This intricate character study in the guise of a thriller puzzle is offbeat and absorbing, thanks in large part to Lubos’ prickly performance as a man as damaged as he is dangerous. Oct. 10, 6:30pm, Smith Rafael; Oct. 11, 9:30pm, Sequoia. (Harvey)

Holy Motors (Leos Carax, France) Holy moly. Offbeat auteur Leos Carax (1999’s Pola X) and frequent star Denis Lavant (1991’s Lovers on the Bridge) collaborate on one of the most bizarrely wonderful films of the year, or any year. Oscar (Lavant) spends every day riding around Paris in a white limo driven by Céline (Edith Scob, whose eerie role in 1960’s Eyes Without a Face is freely referenced here). After making use of the car’s full complement of wigs, theatrical make-up, and costumes, he emerges for “appointments” with unseen “clients,” who apparently observe each vignette as it happens. And don’t even try to predict what’s coming next, or decipher what it all means: this wickedly humorous trip through motion-capture suits, graveyard photo shoots, teen angst, back-alley gangsters, old age, and more (yep, that’s the theme from 1954’s Godzilla you hear; oh, and yep, that’s pop star Kylie Minogue) is equal parts disturbing and delightful. Movies don’t get more original or memorable than this. Oct. 11, 6pm, Sequoia; Oct. 12, 3:15pm, Smith Rafael. (Eddy)