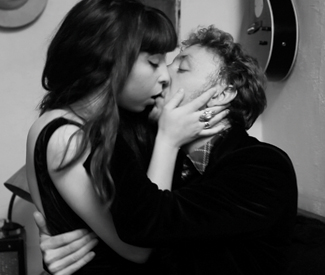 Anders says she views Strutter — the tale of Brett, a rock’n’roller working through heartbreak and post-college angst — as a continuation of her other films with Voss, all of which are music-themed and set in Los Angeles.

“When Kurt and I did Sugar Town, we kind of realized it was a companion piece to Border Radio. I think it was Michael Des Barres who said Border Radio‘s musicians were trying to pay their rent, and Sugar Town‘s musicians were trying to meet their mortgage. They were on a different level, but their desperation was the same,” she says. “In Strutter, the characters are even more desperate; nobody has any real roots except the streets of Los Angeles and the desert. In all three, there’s the music angle — but it’s also the desperation of trying to keep a band going, and what that means to people, particularly in LA.”

Though they tell separate stories, the three films share certain actors — but most of Strutter‘s leads are making their feature debuts. “I teach one quarter a year at UC Santa Barbara, which is where I met Flannery Lunsford, [who plays Brett],” she says. “I introduced Flannery to Kurt and they started doing some projects together. Then, Kurt and I started talking to Flannery about doing that last piece of the Border Radio trilogy, because Flannery also had a band.”

“Both Kurt and I were very enamored with the Britpop triangle of Brett [Anderson] from Suede, Damon [Albarn] from Blur, and Justine [Frischmann] from Elastica,” she says. “While we didn’t want to do that story, it was a kind of muse for the film, and we named all the characters after them.”

Anders may be a film-biz veteran, but she’s embraced the 21st century idea of online fundraising: both Strutter and its score (by Dinosaur Jr.’s J Mascis) were funded via Kickstarter.

“Kurt still has a sheet of paper where I wrote down names of people who, if each of them just gave us a little bit of money, we could finish making Border Radio. Back then you didn’t have any kind of mechanism for making that happen, but that’s essentially what crowdfunding is,” she says. “The great thing is, now you get your friends and people you don’t know to contribute to your project. Then, nobody [else] owns your movie, or record, or whatever it is. You’re doing your work on your own terms. If you’ve got a movie like Strutter, and you don’t have stars, and you’re shooting in black and white — we were doing everything the way we wanted to do it. For me, it was the better way to do things.”