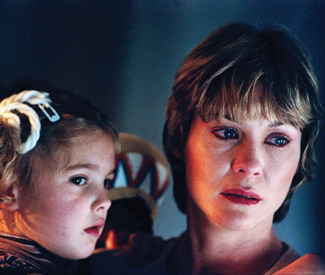 TRASH Scrolling through Steven Spielberg’s filmography and trying to pick which of his blockbusters should be dubbed “most beloved” is no small task, but even diehard Indiana Jones fans and Velociraptor devotees have to give it up for 1982’s E.T. The Extraterrestrial. In honor of its 30th anniversary, the family classic gets a sparkling Blu-ray upgrade, plus bells and whistles (some extras are recycled from earlier DVD releases, and there’s no commentary, but the behind-the-scenes footage unearthed for “The E.T. Journals” is pretty nifty).

Dee Wallace, best-known for playing the matriarch of E.T.’s earth family — though she’s also a cult fave for her roles in horror flicks like 1981’s The Howling and 1986’s Critters — phoned for a quick chat on the eve of E.T.‘s Oct. 9 Blu-ray release.

San Francisco Bay Guardian Re-watching the movie, I was struck by how much of the film is really about a family in crisis.

Dee Wallace For me, the main theme of the film was the friendship between E.T. and Elliott, and that friendship was heightened because of the crisis of the family. Elliott really needed a friend. He needed somebody’s attention. [My character,] Mary, couldn’t give it to him — she was too busy making a living for everybody and raising three kids, you know? I think the family dynamic certainly catapults the film into people’s hearts, because they understand what it means to need somebody.

SFBG The family interactions seem very natural, and the extras on the Blu-ray go into how the kids were allowed to ad-lib some of their lines. What was that like for you?

DW I always looked at it as just being another one of the kids. I love to work that way, where I never know what’s going to happen. Steven would throw people lines and then he’d tell us, ‘Say this line but don’t tell them you’re gonna say it.’ We all were allowed to improv and bring our own ideas in, and then he would add things in to throw us all off. I love that because it keeps you in the moment all the time.

SFBG In telling the story from the kids’ point of view, Spielberg didn’t shoot any of the adult characters’ faces until well into the film’s third act — except yours. Did you have a sense of that at the time?

DW Oh yes. He explained to me that was his plan and that’s why I was cast, because he felt that my energy had a childlike quality to it. Which is true, even today! I’m still pretty childlike.

SFBG You’re also known for appearing in quite a few classic horror films. (I’m a big fan of 1977’s The Hills Have Eyes!) What drew you to those roles and how is acting in a horror film different than acting in a film like E.T.?

DW I don’t think it’s different — I just think you get to act more! [Laughs.] I think you get to use a wider range of emotions, a lot of times, in a horror film. Although in E.T., Mary was very emotional: she was angry, she was worried, she was joyful. I got to create a really beautiful emotional arc in E.T., and that’s what I look for.

SFBG You’ve appeared in some Rob Zombie movies, including his upcoming Lords of Salem, which features several horror vets in the cast.

DW Yes, Rob uses a lot of iconic horror actors in all of his stuff. I adore Rob. I love working with him. I think he’s brilliant. And he reminds me a lot of Steven: very in the moment, very loose, a real visionary, and open to people’s input and creativity.