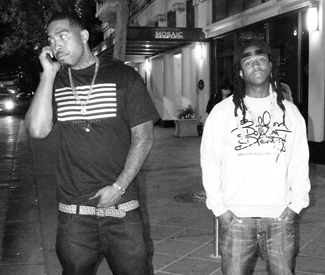 MUSIC “This is our biggest song by far,” Clyde Carson says wearily at his hotel room in San Jose. The song, “Slow Down,” features Clyde alongside his newly reconstituted group, the Team, and we’re waiting for Kaz Kyzah and Mayne Mannish to show. Mayne turns up, along with “Slow Down” producer Sho Nuff, but Kaz remains MIA, and the difficulty of keeping three rappers on the same page probably explains why the song is credited to “Clyde Carson featuring the Team,” though it appears on the crew’s reunion EP, Hell of a Night (Moedoe, 2012). In heavy rotation on KMEL, and branching out to other markets like LA and Chicago thanks to its Youtube-driven dance-craze, “Slow Down” has been bubblin’ for much of the year, as Clyde has doggedly pursued the hit with solo shows and Team dates.

Bay rap fans might experience a little déjà vu here. Back in 2004, when they burst out of Oakland with their regional smash “It’s Gettin’ Hot”— produced by a then-teenaged Sho Nuff — the Team helped launch what became known as the hyphy movement, following up with a memorable onslaught of local hits like “Just Go” and “Patron.” But what should have been the culmination, their sophomore album, World Premiere (Rex/Koch, 2006), was instead interminably delayed, blunting its impact. When Carson moved to LA in 2006 to sign a solo deal with Capitol through The Game’s Black Wall Street, the Team seemed prematurely finished due to business rather than personal or creative reasons.

Like several Bay artists signed by the majors during the hyphy era, including Mistah F.A.B., Clyde never got to drop an album; Capitol only released a pair of singles, “2 Step” and the Sean Kingston-featuring “Doin’ That,” in 2007, but didn’t release Clyde until 2009.

“You never know what’s gonna happen so you can never blame a label,” he says. “At the time Capitol was merging with Virgin. [Capitol Executive VP] Ronnie Johnson took over my project once the companies merged. We was getting ready to shoot the ‘Doin’ That’ video and — he died in his sleep. And I didn’t have enough of a foundation where I could move without a label.”

Instead of succumbing to this blow, Carson got back on the grind, and the success of “Slow Down” has resulted from a perfect storm of factors, beginning with an October 2011 call from now-adult Sho Nuff, whose youth had limited his earlier participation in Team activities.

By November, Clyde says, “we were in the studio recording. I put the hook on ‘Slow Down.’ I wanted a feature so I reached out to Keak da Sneak, but it didn’t work out so I reached out to Kaz and he put that verse on. Then I sent Kaz five or six songs and he did them all in one day. So we were like, shit, let’s do a Team album and put Mayne on these songs.”

Mayne himself is a key element of what we might call the Team 2.0.

“There was a time where I fell back from rappin’ and started learning the game by managing Carson,” he admits. “I wasn’t as confident a rapper as Clyde and Kaz, really goin’ in there destroying shit.”

But “destroying shit” is exactly what Mayne does on the third verse of “Slow Down,” and all over the EP, his rapid staccato bark providing a perfect contrast to the low-register growls of Kaz and Clyde.

“Some rapper blood just came out of me,” Mayne laughs, “and when we started back working with Sho Nuff, he helped bring my whole character and style out.”

The final ingredient was unpredictable: when “Slow Down” first dropped early this year, an SF high school student under the handle J12 posted a Youtube video of a dance he invented to the song. “The J12” has gone ghetto viral, racking up 700,000 hits, spawning numerous homage vids, and fueling demand for Team appearances in previously unheard of areas like Chicago. Inevitably J12 converged with the group, dropping the dance in the official video and becoming Carson’s DJ.

“He put that shit on for real,” Clyde says. “I never imagined havin’ a dance to one of our songs. When I was a teen, niggas wasn’t dancin’. But it lets me know the music we makin’ is resonating with that generation.”

“I ain’t gonna start dancin’,” Carson laughs, though I submit he’s doing the J12 at 1:05 of the official video. “But I definitely appreciate it.”