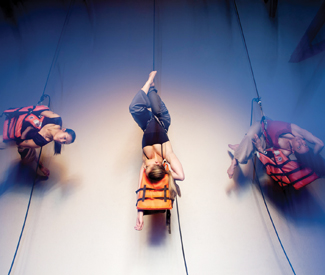 Chien is rehearsing the finale for Niagara Falling, Flyaway Productions artistic director Jo Kreiter’s latest site-specific outdoor work. It will be performed against the west wall of the Renoir Hotel on Market Street. The dance in the air feels quiet and ever so poetic, particularly for a work that originated in Kreiter’s sense of having been “stung and caught by that whole American economics story.”

Niagara is another of Kreiter’s socially conscious choreographies, in which she examines vital issues through art making. She has called herself a “citizen artist,” a person she describes as someone whose work is “essentially concerned about how we live in the world.” (Poet Adrienne Rich and musician-activist Pete Seeger have been guiding lights.)

“Actually,” Kreiter adds, “any artist does that — except that some of us are more able or willing to talk about the issues.” She has called Niagara Falling “an artistic response to the economic degradation of our current recession.”

As a citizen artist, Kreiter’s choreographies are most frequently performed in public places, free of charge. They are accessible to casual passersby, neighborhood folks, and dancegoers. This is art at the heart of the democratic ideal.

Her works also subtly alter the urban landscape and the way we perceive it. After Singing Praises: Centennial Dances for the Women’s Building, the owners of the Women’s Building confessed that before the piece, they had not even known their Mission District neighbors. Mission Wall Dances honored the old Garland Hotel, an SRO that housed disadvantaged people until it burned and was rebuilt as lodging for tourists. (Painter Josef Norris was inspired to add some of Kreiter’s dancers to the building’s existing mural.) With one of her earliest works, Sparrow’s End, Kreiter created an “urban fantasy” for one of the most drug-infested alleys in the Mission. I still remember its beauty and also the odor that pervaded that sad location.

Niagara happened because Kreiter had admired David and Hi-Jin Hodge’s video setting for Brenda Way’s 2009 In the Memory of the Forest. Talking with the artists, Kreiter realized that the three of them had much in common — particularly when she learned that the Hodges had documented the poverty and decay of David’s hometown, Niagara Falls, NY, by talking with its citizens. Some of what he said sounded all too familiar with what is happening to many people in San Francisco.

Both cities are also surrounded by beautiful but sometimes terrifying bodies of water. The imagery is as ancient as Noah’s bobbing ark and as recent as the videos of Japan’s 2011 tsunami. So it seems appropriate that the first two pieces of equipment Kreiter ordered were a lifeboat and life jackets. The boat is a commissioned steel structure; the vests came off the rack.

Hanging from the wall at the Zaccho studio for the last rehearsal there — the equipment would be moved downtown later that day — three dancers are buffeted by the video’s raging waters and a howling storm on the soundtrack. The women look ever so vulnerable as they try to catch and don the slippery life jackets. Yet gradually in all that chaos they find a common rhythm and can link arms in relative safety.

While Niagara is a piece that gives voice to the reality of the urban poor, it’s also a beacon of hope. The work happened because, Kreiter acknowledges, people — like the Renoir Hotel’s owners and Urban Solutions, the SOMA-based economic development nonprofit — have been supportive of the project. Pointing out that she started working on the piece before the advent of Occupy Wall Street, she observes that “everything is collapsing, and yet in some places there are people who try to pull things forward.” *

West wall of the Renoir Hotel