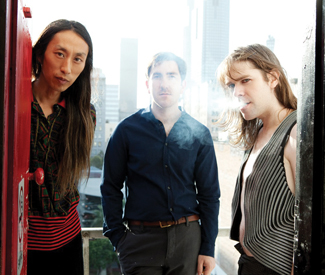 MUSIC After a decade of tinkering on the fringes of lo-fi experimentalism, Ariel Pink has become synonymous with a distinctive production sensibility: submerging effortless, sun-drenched pop hooks in a queasy, viscous haze, like an impulsive, basement-dwelling Phil Spector for the 21st century.

From Worn Copy (2005) to Before Today (2010), Pink’s universe seemed to hinge on this murky aesthetic, making this year’s Mature Themes all the more confounding. Despite its clean, competent studio polish, Pink’s newest effort exudes all the vague perversity and outsider spirit of his most radically fuzzed-out 8-track explorations.

Next Monday, Pink will appear at Bimbo’s 365 Club in support of Mature Themes, armed with the Haunted Graffiti project, and the tightest lineup of his backing band to date.

Whereas many bedroom producers have lost their way in the transition to studio recording, (largely due to a forfeiture of creative control), Pink’s success in this new environment is attributable to a rigidly independent approach.

“We basically lived at the studio that we built ourselves… over the span of six, seven months,” Pink explains over the phone, from his home in LA. “It gave us the opportunity to… let ourselves get loose and comfortable. That’s the whole goal, I think… you don’t want to be keeping track of time. You’re not going to take certain risks.”

Surely enough, Mature Themes abounds with risky maneuvers, from the Ween-esque genre-emulsifying “Is This the Best Spot?,” to the lo-meets-hi-fi clash of “Schnitzel Boogie.”

“A song like ‘Schnitzel Boogie’ is not gonna come [about] when you’re punching clock at the studio,” Pink observes.

He would know, given his first foray into studio territory, which resulted in Before Today: the crossover hit that catapulted the Haunted Graffiti project to Pitchfork-level acclaim in 2010. It’s the most immediately engaging, song-oriented effort of Pink’s career thus far. However, he contends that even “Round and Round”‘s pop brilliance was the product of a torturous, creativity-stifling recording process.

“It gets expensive, very quickly, if you’re in somebody else’s studio, and there’s somebody else engineering you,” Pink says. “Really, it’s better if we just don’t involve anybody else.”

Bedroom producers are, by nature, control freaks: commanding the direction of their own creative universe with little regard for outside perspective. Therein lies Mature Themes‘ success; although the album finds Pink backed by a band for just the second time, it resembles the unfiltered product of a singular mind, much like his formative recordings.

Pink’s eccentricity, and his ever-expanding influence among laptop auteurs, can be credited to a self-described “aesthetic of all-inclusiveness.” Instead of cherry-picking artistic influences, or even preferences, his objective is to jam the entire art-world indiscriminately through his musical meat-grinder.

“I always did what I did with the notion of dispelling any kind of genre formality,” Pink says. “I wanted to make experimental music, [but] in the form of pop music, like some sort of joke.”

Truly postmodern, this philosophy hinges on isolating and extracting musical idioms, and reassembling those ideas in a new context. Given Hype Williams’ omnivorous sampling techniques, Neon Indian’s confused retro-futurism, and the scathing consumer-culture indictments of James Ferraro (who will share the bill on Monday), Pink’s all-inclusive approach has manifested itself far and wide, generating not just a trend, but a zeitgeist.

Revealingly, when pressed to explain the thread between “chillwave” and “hypnagogic pop,” Neon Indian and Ferraro, Pink declares, “that thread is really my contribution, I feel.”

From pop artistry to vanguard tinkering, Pink refracts a heaping pile of musical possibilities through Mature Themes‘ warped lens, making a strong case for himself as the unifying figure of an otherwise fragmented musical landscape.