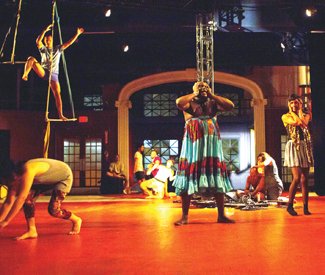 THEATER The word “challenging” gets thrown around a lot in the art world. Everyone wants to be considered challenging. So much so, it starts to sound like a byword for its opposite. A plea to “like” on Facebook. That sort of thing. In truth, few pieces of theater, dance, or performance actually live up to the meaning of this over-used phrase by unsettling basic assumptions about our relation to the work itself and its social and institutional contexts.

Judging by such terms — not to mention the extreme reactions of its audiences — Keith Hennessy’s Turbulence (a dance about the economy) has to be considered a challenging work of art; it offers the opportunity for experience and dialogue that is rare in the performance context.

Turbulence is a highly collaborative, experimental piece drawn from both performer-choreographer-activist Hennessy’s longstanding concerns with art-making in a capitalist-imperialist system and his wide set of contacts and relationships across the performance and dance worlds. Although the exact grouping of artists participating in the piece has changed throughout the life of the project, the participants (mixing Bay Area, US, and European artists) invariably function as full partners in the undertaking. The project has been underway for two years as research, experiment and performance in parts of Western Europe and the US — including workshop performances at CounterPULSE earlier this year — and makes its official Bay Area debut at Yerba Buena Center for the Arts this weekend before heading off to New York.

I encountered it two weeks ago during its official world premiere at Portland, Ore.’s Time-Based Art (TBA) Festival, where former YBCA performing arts curator Angela Mattox was inaugurating her first year as artistic director with a wide-ranging and exceptional program of new performance. True to the spirit of the long-term, in-depth relationships she is working to develop between artists and community, Mattox had laid the groundwork for a meaningful engagement with Turbulence back in June with a symposium that facilitated discussion about the politics of the work.

As a knowing, rigorous response to crisis — political, economic, social, spiritual — Turbulence by its nature calls into question the relations and possibilities undergirding its own position, and presentation, in the institutional context of contemporary dance and performance. That’s to say, it can be a somewhat unwieldy, confusing beast for its sponsors and hosts as much as for its audiences. Even so simple a thing as a run time for the performance can’t be counted on. The first night I attended at the Imago Theater, in Portland’s southeast quarter, it was underway by 8:30pm-ish.

In the end, I saw Turbulence unfold on two consecutive nights of its four-night run. It’s striking both how different it could look and feel each night, and how much clearer the work’s parameters and possibilities, its logic and dynamism, reveal themselves with repeated encounters. Someone walking in off the street could be forgiven for thinking the whole thing an improvised party, or a theatrical free-for-all, but for all its spontaneity, seeming randomness, open-ended invitations, and free-flowing invention, Turbulence builds on a wealth of collective research, discovery, and highly attuned relationships that — in participation with a given audience — produce their own unique results.

The Turbulence project began before Occupy, and yet it dovetails in basic ways with the impulses that last year brought people into shared, reclaimed “public” space across the country and globe, in fundamental protest against the status quo and, at the same time, in a mode of spontaneous, creative, generative desire geared to individual and collective freedom — freedom from the oppressive structures and ideas of an exploitative class system, but also freedom in the widest sense of working out the meaning and potential in the real lifetimes of real bodies in dynamic social relation to each other.

Boundaries of all kinds are made porous here — or are simply revealed as already porous, and therefore fluid, contestable, negotiable, infinitely malleable. *

TURBULENCE (A DANCE ABOUT THE ECONOMY)