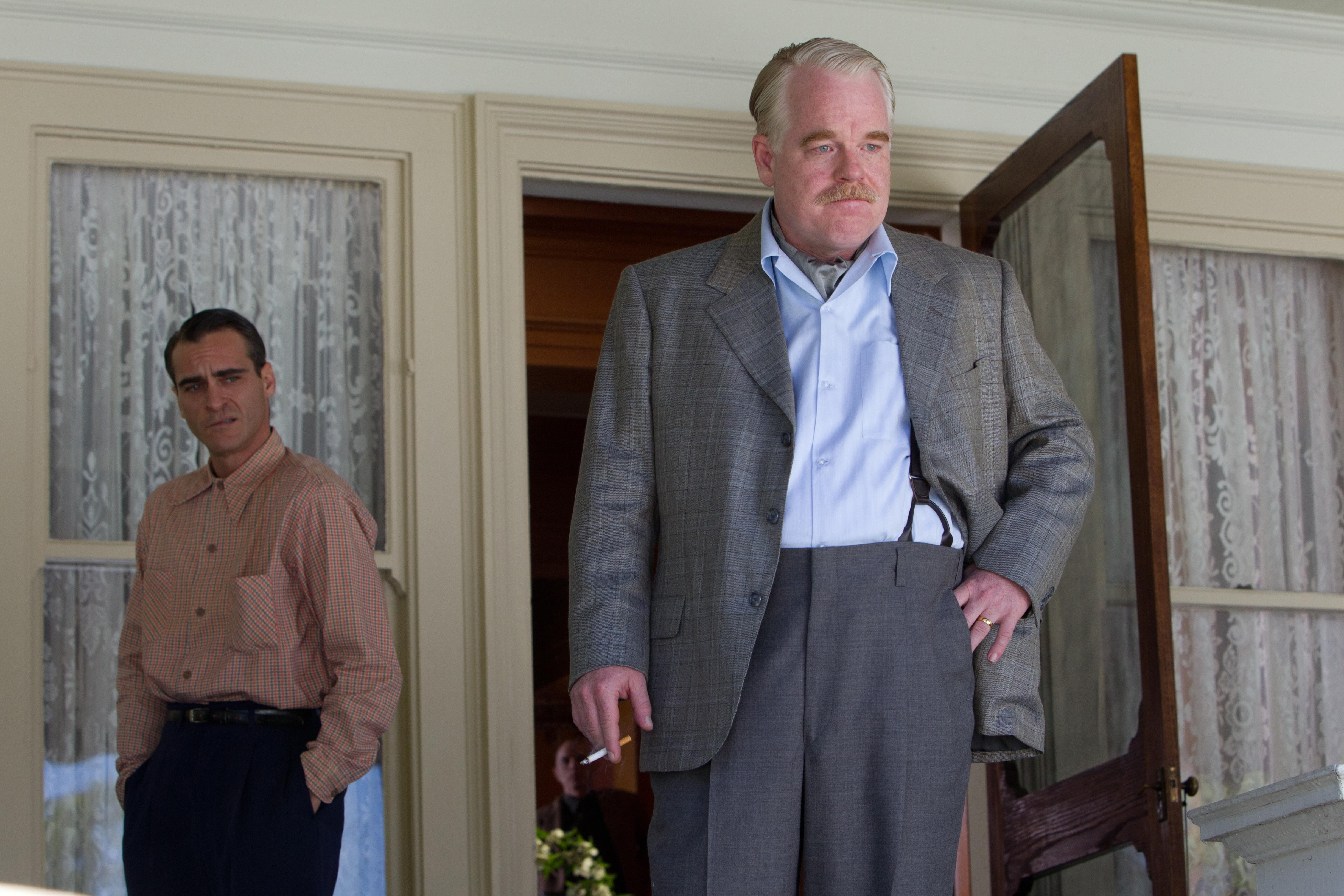 It’s here at last! Clear your mind and join the Cause!

Yep, The Master opens today, along with a pair of cop movies (one set in gritty LA, the other set in an even grittier megacity of the future). Already in progress is the 3rd i’s San Francisco International South Asian Film Festival. Check out my take on all of the above right herre.

The most excellent Caitlin Donohue takes on Stephen Elliott’s porn-themed About Cherry (screening at the Castro tonight!) here.

As-yet unreviewed due to various reasons (two being: aversions to PG-13 horror flicks, and Channing Tatum overload … seriously, guy, take a vacation!), but most certainly opening today, are House At the End of the Street (alas, not the House Hunters suspense thriller we’ve all been waiting for) and high-school reunion comedy 10 Years. I didn’t make it to my 10-year reunion but I feel confident saying that NOBODY in my class (go Tigers!) showed up with Magic Mike-style abs.

But wait, there’s more! Read on for the rest of the best (and meh-st) of the week.

Hello I Must Be Going Blindsided by her recent divorce, 35-year-old Amy (Melanie Lynskey) flees New York City for quaint Westport, Conn., where she nurses her wounds, mostly by sleeping and watching Marx Brothers movies. Amy’s protracted moping rankles her perfectionist mother (Blythe Danner, bringing nuance to what could have been a clichéd character) and concerns her workaholic father (John Rubenstein). Dad’s trying to land a big client so he can “make back some of the money we lost in the market” — a subtle aside in Sarah Koskoff’s script that suggests Amy’s parents aren’t as well-heeled as they used to be, despite the ongoing renovations to their swanky home, catered dinners, and expensive art purchases. Money woes are just one of Amy’s many concerns, though, and when a distraction presents itself in the form of 19-year-old Jeremy (Girls‘ Christopher Abbott), she finds herself sneaking out at night, making out in her mom’s car, smoking weed, and basically behaving like a teenager herself. As directed by indie actor turned director Todd Louiso (2002’s Love Liza), Hello I Must Be Going is a nicely contained, relatable (self-loathing: we’ve all been there) character study — and props for casting the endearing Lynskey, so often seen in supporting roles, as the film’s messy, complex lead. (1:35) (Cheryl Eddy)

How to Survive a Plague David France’s documentary chronicles the unprecedented impact political activism had on the course of AIDS in the US — drastically curtailing its death toll within a few years despite considerable institutional indifference and downright hostility. As the epidemic here first surfaced in, and decimated, the gay male community, much of Reagan America (particularly in religious quarters) figured the death sentence was deserved. The President himself infamously refrained from even saying the word “AIDS” publicly until his final year of office, after thousands had died. Both terrified and outraged, the gay community took it upon themselves to demand treatment, education, and research. Most of this urgent 1980s overview is concerned with the rise of ACT-UP, whose angry young men successfully lobbied and shamed corporate, academic, medical, and pharmaceutical bodies into action, with the result that by the mid-90s new drugs existed that made this dreaded diagnosis no longer a necessarily terminal one. France is a journalist who’s been covering AIDS practically since day one, and his first feature (made with the help of numerous first-rate collaborators) is authoritative and engrossing. Just don’t expect much (or really any) attention paid to the contributions made by SF or other activist hotspots — like many a gay documentary, this one hardly notices there’s a world (or gay community) outside Manhattan. (1:49) (Dennis Harvey)

Somewhere Between Five years ago, when filmmaker Linda Goldstein Knowlton adopted a baby girl from China, she was inspired to make Somewhere Between, a doc about the experiences of other Chinese adoptees. The film profiles four teenage girls, including Berkeley resident Fang “Jenni” Lee, whose American lives couldn’t be more different (one girl has two moms and attends a fancy prep school; another, raised by devout Christians, dreams of playing her violin at the Grand Ole Opry) but who share similar feelings about their respective adoptions. The film follows the girls on trips to London (as part of an organized meeting of fellow adoptees), Spain (to chat with people interested in adopting Chinese babies, and where the question “What does it feel like to be abandoned?” is handled with astonishing composure), and China (including one teen’s determined quest to track down her birth family). Highly emotional at times, Somewhere Between benefits from its remarkably mature and articulate subjects, all of whom have much to say about identity and personal history. Lee and filmmaker Goldstein Knowlton will appear in person at select opening shows; visit www.landmarktheatres.com for more information. (1:28) (Cheryl Eddy)

Trouble with the Curve Baseball scout Gus (Clint Eastwood) relies on his senses to sign players to the Atlanta Braves, and his roster of greats is highly regarded by everyone — save a sniveling climber named Sanderson (Matthew Lillard), who insists his score-keeping software can replace any scout. Gus’ skill in his field are preternatural, but with his senses dwindling, his longtime-friend Pete (a brilliant John Goodman) begs Gus’ daughter Mickey (Amy Adams) to go with him — to see how bad the situation is and maybe drive him around. Ultimately, the film’s about the rift between career woman Mickey, and distant dad Gus, with some small intrusions from Justin Timberlake as Mickey’s romantic interest. Trouble with the Curve is a phrase used to describe batters who can’t hit a breaking ball and it’s a nuance — if an incontrovertible one — unobservable to the untrained eye. While Mickey and Gus stumble messily toward a better relationship (with a reasonable amount of compromise), Curve begins to look a bit like The Blind Side (2009), trading the church and charity for therapy and baggage. But what it offers is sweet and worthwhile, if you’re tolerant of the sanitized psychology and personality-free aesthetics. But it’s a movie about love and compromise — and if you love baseball you won’t have trouble forgiving some triteness, especially when Timberlake, the erstwhile Boo-Boo, gets to make a Yogi Berra joke. (1:51) (Sara Vizcarrondo)