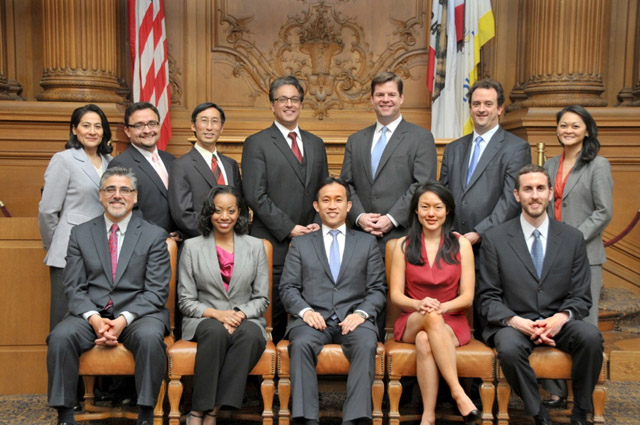 The San Francisco Board of Supervisors officially received the official misconduct case against suspended Sheriff Ross Mirkarimi yesterday, starting the clock on the 30-day deadline that the City Charter provides for that body to take action. Board President David Chiu announced a special meeting to consider the case on Oct. 9 at 2pm.

“The last day the Board of Supervisors can act on this is Oct. 17,” Chiu told his colleagues yesterday, reiterating the schedule the board had previous agreed to: a 10-minute presentation by the Ethics Commission, 20 minutes by representatives of Mayor Ed Lee (who brought the case), 20 minutes by Mirkarimi’s side, a five-minute rebuttal by Lee, public comment (which could last for hours), and then deliberation by supervisors.

In addition, attorneys for both sides have until Sept. 25 to submit any legal briefs they want the supervisors to consider, and Mirkarimi’s attorneys are expected to raise objections to an Ethics Commission summary they considered “one-sided,” as well as getting into the issue of whether Lee committed perjury during his sworn testimony in June.

It takes at least nine of the 11 supervisors to remove Mirkarimi, and there is an open question about whether some supervisors should recuse themselves from voting because of conflicts-of-interest, which would essentially count the same as a vote in Mirkarimi’s favor.

Lee was asked on the witness stand whether he spoke with any supervisors about removing Mirkarimi, which he denied. But Building Inspection Commissioner Debra Walker said her longtime friend and political ally Sup. Christina Olague told her Lee had sought her input on the decision. Confronted by journalists, Olague denied the charge but said, “I may have to recuse myself from voting on this.”

Lee was also asked whether he tried to get Mirkarimi a city job in exchange for his resignation, which Lee denied, but former Sup. Aaron Peskin has said that permit expediter and Lee ally Walter Wong (who has refused to answer questions from the media) extended that offer through him, which Mirkarimi didn’t accept. The Ethics Commission refused to consider the perjury allegations, calling them beyond its purview, but Mirkarimi attorney David Waggoner said he plans to submit sworn declarations by Peskin and Walker to the supervisors.

Another possible recusal from the vote would be Sup. Eric Mar, who just happened to be called as a juror in Mirkarimi’s criminal case before it was settled with a plea bargain. There have also been rumors that Board President David Chiu spoke with Lee about Mirkarimi at some point. Last month, Waggoner told the board that he wanted each supervisor to declare whether they have spoken with anyone about Mirkarimi, but their team is proceeding cautiously and wary of offending the supervisors who will now decide the fate of their former colleague.

“We’re going to respectfully ask each member of the board to state under oath who they’ve talked to about the case,” Waggoner told us.

Normally, jurors would be extensively questioned during the voir dire process, and those who had served on an elected body with a defendant for years would almost certainly be removed from the jury pool, which seems to have been the case with Mar’s disqualification on the criminal case. But that’s just one more example of how this unprecedented process is anything but normal, with city officials basically making up the rules as they go along.

Mirkarimi’s wife and alleged victim, Eliana Lopez, has consistently maintained that she was never abused, except by city officials who have sabotaged and humiliated her family and taken away its livelihood. She told the Guardian that the thin charges in this case shouldn’t warrant the removal of an elected official: “You can have different opinions about Ross’s behavior, and people can have different opinions about that, but the people of San Francisco should decide who represents them.”

Lopez said she’s been dismissed and mistreated by Lee, the Ethics Commission, and domestic violence advocates: “These self-appointed white women that are part of the Domestic Violence Consortium are doing everything they can to attack me and insult me while claiming to help me, and never once reaching out to me.”

But she said that she’s hopeful the supervisors will resist political pressure during an emotionally charged election season and do the right thing: “What we need from the supervisors is brave and honest supervisors. The people of San Francisco need that.”