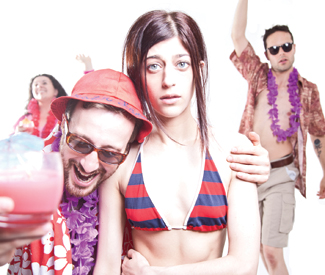 THEATER “No one is stupid on a cruise.”

Now that’s a line that puts the dumb in wisdom, which is the point. For no one can be stupid where everyone is by definition stupid. And that, in turn, might become the basis for a transformation of some kind.

Not surprisingly, this refrain drops from the lips of a habitual cruise-line passenger (and, arguably, the goofiest, most awkward member in a set of goofy, awkward passengers) aboard the Crown of the Sea, the sleek tourist liner headed out into international waters and some secrecy-shrouded ritual in Port Out, Starboard Home, a new play by Sheila Callaghan (That Pretty Pretty; or, The Rape Play) developed closely with commissioning company foolsFURY.

The culmination of a four-year collaboration between San Francisco’s foolsFURY and the New York playwright (whose We Are Not These Hands also premiered locally in a Crowded Fire production in 2006), Port Out is an ensemble-driven work of physical theater in a high-pitched comic-tragic vein, helmed by foolsFURY artistic director Ben Yalom. The production features some fairly elaborate choreographed sequences devised alternately by company and cast member Debórah Eliezer and SF choreographer Erika Chong Shuch (who, among other things, stages a balletic feeding frenzy at the all-you-can-eat buffet). The current run at Z Space marks the first half of a bicoastal world premiere (with the production opening at New York’s La MaMa in November). Cast and crew hail from both coasts too.

It’s an impressive achievement on the surface. Unfortunately, the play that opened last week is practically all surface. Despite its pretense, and operative nautical metaphor, it never ventures into anything deep, but contentedly bobs around the shallows of the familiar — the commodification of spiritual values and experience — in a satirical key that is more flip than ferocious. If there are things to enjoy along the way (the best scene is a group therapy session that allows fuller scope to some dynamic ensemble acting), they never lead to the storm we sense brewing (but which, at least for the audience, never really breaks).

Managing the passengers are a brashly exotic cruise director named Johnny O (Brian Livingston) — sporting a tattooed torso reminiscent of Queequeg — and the mysterious Maya (Amy Prosser), a waifish woman with an abnormally small infant in a shoulder sling whose slow, deliberate movements and pacific mien stand in stark contrast to the frenetic and self-conscious energy of her adult charges (who she’s gearing up for some ominous ritual in international waters, where apparently anything goes).

Callaghan endows these characters with choice details often announced by the opining cast in choral unison: “Gary likes to quote movie lines … it’s fucking annoying,” or “Mack believes people need to think of themselves as unique, and they’ll do anything to preserve this façade. This makes him hate everyone. Especially himself.”

Such lines, reveling in unnecessary insights and an arch specificity, too often ring twee and smug, their garish particulars only rarely of more value than the occasional chuckle. The dialogue between characters or in direct address to the audience tends to retain the same superficial tone.

Much of the dialogue was reportedly digested and recast by Callaghan from improvisations and research conducted by the company (including, at one point, aboard a real cruise ship), but there’s little that feels true to life. The portraiture here is a long way, for instance, from the photographic portrait-masquerades in Cindy Sherman’s work from the 1990s and 2000s, currently on view in San Francisco Museum of Modern Art retrospective. Sherman’s art projects a series of worn-out debutantes, former prom queens, backyard pool bunnies, celebratory single ladies, and so on — types you might find on a cruise, in fact, but conveyed with a force wholly missing here because in Sherman’s work we can identify the real in the type, and the type in the real. This dissonance is powerful — mixing horror and humor, compassion and revelation — and it remains in the open seas just beyond Port Out‘s horizon. *