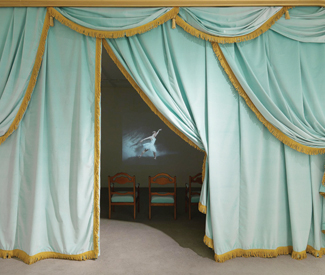 DANCE/VISUAL ART Nineteenth century story ballets raise a lot of questions: how come Prince Siegfried can’t tell the difference between the Black and the White Swans? What’s the matter with La Sylphide‘s James that he runs after the Sylph and foregoes his lovely human bride? In her first West Coast solo exhibit, Philadelphia-based visual artist Karen Kilimnik addresses these issues and more. The works in “Dance Rehearsal: Karen Kilimnik’s World of Ballet and Theatre,” at Mills College Art Museum through December 9, use clever reframing to suggest why these apparently outmoded stories remain popular classics.

Kilimnik works in a variety of mediums — video, live performance, and installation included. In this show, comprised of works from 1988 to the present, she investigates ballet as a 19th century artifact, studying it with her own wary, 21st century eyes. She gives us a complex perspective on an art that aims to transcend human limitations, both physical and intellectual. The result is a kind of double vision in which she simultaneously evokes the objects within their own exquisite context even as she superimposes borders or lenses on them. “Dance Rehearsal,” guest curated by Melissa E. Feldman, is a passionate tribute to this most artificial of genres looked at from a distance.

I am not sure to what extent “Dance Rehearsal” will communicate to a viewer who doesn’t have at least some basic knowledge of and sympathy for ballet. Longing, the otherworldly, sylphs, swans, magicians, and fairy princesses are not everybody’s cup of tea. But if you can play along with Kilimnik’s conceits, the show offers intriguing insights and re-interpretations of still-popular ballets, none of which I found in the least bit questionable. Some were more serious than others, but none of these “re-viewings” were facile.

It helps, for instance, to know that Gelsey Stuck on the Matterhorn, which resembles calendar art, refers to dancer Gelsey Kirkland, here shown as Giselle, a role she frequently played. Kilimnik suggests consanguinity between two dancers — one real, one imagined — who suffered similar fates. The elaborately titled Prince Siegfried Arriving Home in Vienna 1800’s, from Versailles, 1500’s — painted in what looks like roughed-up 18th century French style — shows a young man bowing courteously in a plumed hat and over-the-knee boots, certainly not what Swan Lake‘s Siegfried would ever have worn. Kilimnik is likely commenting on the fact that this most romantic of princes was a descendant of French court ballet at its most artificial.

However, I don’t think I would have understood (though I liked its warm colors) a C-print of two shadowy peasant girls from Giselle without Kilimnik’s title: 2 Peasant Girls, Silesia-future wilis. I had never considered that the cheerful village girls seen in Giselle’s first act might have ended up as haunted, ghostly women.

Some other works have an unexpected poignancy to them. The installation Paris Opera Rats shows three worn ballet slippers, grey tulle seemingly from a dirty tutu, and some plastic mice, all bunched up around a foam curbstone. Paris Opera Ballet’s young dancers are still (affectionately) called rats, and this piece speaks eloquently about who 19th century ballerinas were — poor, working-class women, one step above living in the gutter. The longer you study Kilimnik’s crayon-on-paper Seating Chart of the Paris Opera House, the more you see in the rigidity of its grid patterns, its ranked subdivisions, and careful color allocations a reflection of an implacable hierarchy, not just of ballet patrons, but a critique of a social system.

Perhaps “Dance Rehearsal”‘s most spectacular work, choreographed by Kilimnik, is the video installation Sleeping Beauty and friends. It’s a love letter to ballet as something that aims for an ideal that, inevitably, is held in check by what we are. The video of the stage performance was intentionally wobbly, so was the dancing. Using variations from specific ballets and jumbling them up, Kilimnik tries to help Siegfried distinguish between the Black and White Swans. Here two women dance neck-to-neck, and he still doesn’t get it. What about James in La Sylphide? Truthfully, he and the sylph, who wears tons of Swarovski crystals, are made for each other — each is more self-involved and narcissistic than the other, not far from the truth. Sleeping, which also included perspectives on Don Quixote and Diana and Actaeon, was nothing less than brilliant. A number of lectures and a ballet film series are scheduled concurrently with this exhibit.