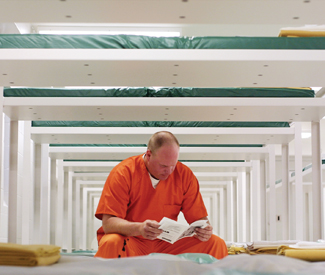 Recidivism is like a circular river of criminality. After picking up toxic momentum in my neighborhood, deviance carves a path of destruction through yours. Being a participant in this tragic affair while defined indefinitely by a rap sheet from hell — it’s a feeling worse than death.

Someone has to put their foot down and say enough is enough. If I only had one wish — I’m almost embarrassed to say — prisons and jails would become factories that turn lawbreakers into advocates for change. Sound crazy? Welcome to my world, where sanity is a luxury. But I’m willing to put up or shut up.

In 2007, the Legislature approved Assembly Bill 900 to bring the smart-on-crime movement to the California Department of Corrections and Rehabilitation (CDCR). An expert panel designed the California Logic Model to evaluate and measure evidence-based methods, which are supposed to combine education, lifeskills, and cognitive restructuring. In theory, it makes perfect sense.

Then the recession hit, and the labor-intensive smart-on-crime movement never got moving. Budget cuts brutalized rehabilitation. About the only austerity measure left to impose, according to conventional wisdom, is to remove the word “rehabilitation” from the agency’s masthead. As the state struggles with a federally imposed prison population cap and counties scramble with Realignment’s influx of prisoners, I’m through waiting. Seventy percent of incarcerated people who still suffer from untreated substance abuse will continue to recidivate 70 percent of the time. It’s not a puzzle. People need help, and lives are at stake — including my own.

In late 2009, I found myself part of a mass transfer of long-term offenders being sent to the Correctional Training Facility (CTF) in Soledad. Attempts to think outside the box in higher security prisons always fell on deaf ears. However, the abundance of rehabilitative programs being offered in CTF presented a rare opportunity.

Inmate-run groups grew roots in CTF in the mid-’00s, and programming cuts didn’t impact CTF to the same degree as other prisons. In the self-help method, volunteers from the community or correctional employees in their off-hours team up with prisoners to deliver services. Soledad is unique. Seven days a week, seminars and workshops facilitated by inmates for inmates cover 12-steps, anger management, and victim awareness, to name just a few.

One shining example is a self-funded college program that serves almost 300 students a semester. In 2010, a small cohort of determined individuals established an arrangement with Palo Verde College to become specialists in their Alcohol and Drug Studies (ADS) program. Since I’m “struck-out” for a three-strikes drug offense, I have a vested interest in this concept. Thirteen years of bearing witness to political and governmental indifference to public safety has turned me into a fanatic on a mission. We need training and treatment — and we need it now. The CDCR does have a substance abuse certification program in Solano State Prison, but it is too exclusive and expensive, not to mention a logistical nightmare.

Palo Verde College offers ADS to some CDCR prisoners via distance education, but obtaining state credentials requires a larger investment. We found an investor. With the help of a generous nonprofit organization, we intend to use the ADS program to develop an inclusive and mobile method of cost-effective licensing.

As the spring 2011 semester comes to an end, we have almost 20 students ready to begin the final phase of state certification. Twenty guys might not be able to change the world, but if given the chance, we can lay a solid foundation to make an impact on the underworld. I’m excited.

In-custody substance abuse treatment followed by aftercare is most effective when total exposure lasts two to three years. It’s also very expensive. Post-secondary training tied to long-term treatment is fiscally and socially responsible — cutting right to the heart of criminal thinking, anger, and addiction. Our specialized studies empower us to develop promising methods that can be delivered for next to nothing.

We follow the evidence. A rehabilitative oversight committee identified adult education and addiction as the two greatest criminogenic needs not being met. In response, a handful of us formed Inside Solutions, an evidence-based think-tank, and designed a program that addresses these unmet needs.

Starting in the summer of 2011, college-educated tutors began helping illiterate offenders raise their test scores while the ADS students began facilitating cognitive-lifeskills workshops. By establishing a voluntary program that doesn’t impact the budget, we are delivering group-oriented treatment to those who need it the most. One prisoner helping another is power without equal. Delivering programs doesn’t take a lot of money — it takes ingenuity, passion, and tenacity. We do things for pennies on the dollar, and we wouldn’t even know what to do with the type of funds it takes to mismanage a fully-staffed program. Rather than some bunk program ran by a bunch of timecard punching half-assers, we remain true to our cost-effective roots by making something out of nothing. More bang for the buck is the motto of our method. For years, I felt like I was buried alive on the banks of the Recidivism River. Not anymore. Now I’m on a collective sojourn of systemic self-actualization. Accumulating multiple ADS certifications, college degrees and delivering treatment is a life-changing convergence of therapeutic alchemy. I have been transformed by the process of turning convict lead into clinical gold — social justice of the highest order. If we had a budget to match our enthusiasm, I can only imagine. In the here and now, not bad for a bunch of criminals.