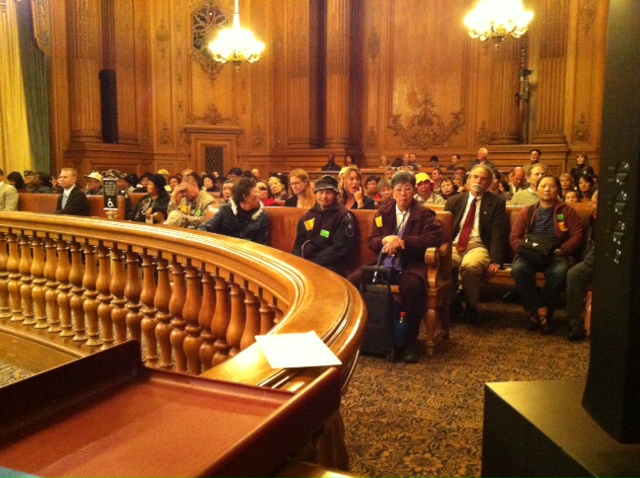 The question of whether San Francisco creates a renewable energy program that offers an alternative to Pacific Gas & Electric got its first major hearing at City Hall today, with the business community claiming it’s too expensive and supporters arguing that the time has come for the city to address climate change and the long-term energy needs of city residents and businesses.

The Board of Supervisors Budget & Finance Committee voted 2-1 in favor creating CleanPowerSF, entering into a contract with Shell Energy Northern California to administer the program, and devoting $19.5 million from the San Francisco Public Utility Commission’s water fund to help launch it and buy clean power for city residents.

Sups. John Avalos and Jane Kim supported the project, while Sup. Carmen Chu was opposed. It now goes to the full Board of Supervisors next week, where it is expected to have progressive support and be opposed by the fiscal conservatives.

“I do think we will have the necessary majority to get this through,” the measure’s sponsor, Sup. David Campos, told us. But one open question is whether Mayor Ed Lee will veto a measure that his SFPUC appointees developed but his downtown allies are trying to kill, and if so, whether there are eight supervisors willing to override a veto.

But Campos noted that SFPUC officials testified today that CleanPowerSF is the only way they’ve identified to meet the city’s ambitious official goals for reducing greenhouse gas emissions, which call for a reduction of 20 percent below 1990 levels by the end of this year and an 80 percent reduction by 2050.

Supporters who testified today included environmentalists, progressive groups, and young people who cast addressing climate change as the defining struggle of their generation. “This, not to go overboard, is the most important vote you’ll ever do,” said the Sierra Club’s Arthur Feinstein.

Those who spoke against the program included the usual array of downtown groups that have traditionally defended PG&E’s interests – including the Committee on Jobs, Golden Gate Restaurant Association, and Plan C – and they were joined by an unusually large number of elderly Asian individuals wearing stickers opposing the project.

“It’s a bad program that doesn’t meet even the basic elements of its original promise,” said Chris Wright, executive director of the Committee on Jobs, which PG&E has helped fund since its inception. Like most CleanPowerSF opponents, they have long opposed even the concept of community choice aggregation (CCA), the state law that allowed the city to create CleanPowerSF.

PG&E’s longtime support by local politicians has eroded in recent years because of its overkill campaigns against public power initiatives and supporters and its negligence in the deadly San Bruno pipeline explosion.

Even GGRA Executive Director Rob Black told the committee, “PG&E, a local company, candidly has its problems.” But he and other project opponents – and even a few supporters of the project – centered much of their opposition on the involvement of Shell, which has a bad reputation and environmental record, like almost every other multinational energy company.

“I have the same qualms about Shell that everyone else does,” said Katherine Roberts, who said that she nonetheless supports the project, calling it the only way for most San Franciscans to directly support the development of renewable energy sources. Shell was the sole bidder on a project that requires enormous financial wherewithal.

Campos calls the focus on Shell a diversionary tactic: “PG&E already buys energy from Shell. To the extent people don’t want Shell in the picture, Shell is already in the picture.”

Both the supervisors and the mayor will be under intense pressure to derail CleanPowerSF, with that campaign led by downtown groups and IBEW Local 1245, the union that represents PG&E workers. Sup. Scott Wiener, who says he’s still undecided, told us that his office was flooded with phone calls today, mostly in opposition to the project.