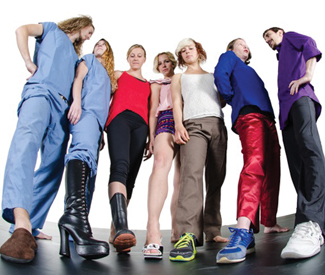 DANCE The newest entry into the arena of collective self-producing is Colin Epstein’s “Constants & Variables” at Dance Mission Theater. None of the six choreographers he presented at its debut (Sept. 7-9) are new, though some of them were, previously, just barely on my radar screen. Epstein has a good eye; he put together a well-balanced program in which the pieces complemented each other in size, genres, and thematic material. They made for an evening of sometimes challenging, sometimes hilarious, never less than competent dance. If Epstein wants an additional career, he just might have one percolating in the back of his head.

As a choreographer-performer Epstein has one foot in the circus world. In A Musement he deftly used a small chair as a prop that acquires its own life to become a contentious partner. The joke is old among clowns, as is the inclusion of a willing audience member. For this to work the timing has to be immaculate. Epstein’s was good but the overall arc could have been tighter.

However, there was nothing wrong in They were already here‘s timing, a splendidly funny courting duet on trapeze for Epstein and the lovely Cat Bodnar (as an ingénue who gets involved with a bumbling suitor). The intricate giving and taking of weight excellently expressed the ebb and flow of their charming relationship.

Venture Dance Project’s smartly designed Wholeding used Laurie Anderson’s whispered “From the Air” as a sonic carpet on top of which the five dancers —all of similar sizes and looks — coalesced into and escaped out of focus. At one moment you saw them as one person and then, in something approximating split screen technique, they divided into different segments. A wafting head, a side bend, or a rocking knee would initiate a scattering and recombination into smaller units without ever disturbing a thrust towards oneness. The evenness of the tone, the excellent use of space, and the small variations within strict parameters made this a pattern dance that breathed with life.

Wasteland: Journey to a New Home paired Derek Harris and the easy-on-her-feet Meegan Hertensteiner in a work that that did exactly what its title suggested. Drawing for some of its funnier imagery on jungle adventure movies, Wasteland‘s morphing identities also suggested a darker underbelly. Though clever and smoothly performed, some of its meandering trajectory could profit from clarification.

Hilary Palanza’s fine duet little heart, out of reach, most recently seen at RAWdance’s CONCEPT series, stood up well in Dance Mission’s larger venue. Here the work developed an elastic sense of breath that expanded its dream-like scale. The contentiousness, the ruptures, and the give and take of aggression popped up like bubbles from a still pond. The dancers slipped out of each other’s embraces and into confrontations, but it was the sensuous physicality of bodily contact that resonated most strongly. What remained was the tactile memory of skin on skin, whether lushly cherished, barely perceived, or roughly rejected.

Jochelle Elise Pereña and Ashley Trottier’s Coat Check started out on a note of high comedy with Trottier dragging what looked like Winnie the Pooh‘s Heffalumps out of a pile of clothes. Then the dancer (who has some of the best-looking gams around) engaged in a hilarious seduction of a spread-out coat, ending in a copulation which fused her with the object of her lust. Unfortunately, the rest of the work didn’t hold nearly as well. My suspicion is that the punch line would have worked better if the “Heffalumps”‘ genders had not been so clearly identifiable from the beginning.

Kelly Kemp’s fascinating excerpt from her new Confessions of a White Girl offered a glimpse of what is to come. Six women in various shades and shapes of white quietly stood one behind one another. Heather Arnett finally stepped out in front. The others followed, each addressing us with mouthed words and tiny gestures. Was this a prisoner line-up, or did we watch the peeling away of layers of Arnett’s identity? Fanning out across the space in overlapping sections, they finally combined into a group shouting answers to an unasked question. The complete Confessions will be seen at the Garage October 5-13.