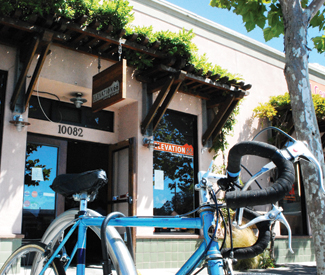 BEER I will not re-enter the one-sided debate of whether the East Bay is cooler than San Francisco (we covered that in our much hullabalooed April 11 cover story, helpfully titled “San Francisco’s loss”) But I will tell you this: one side of the Bay Bridge has less hills. Less hills being a boon for the drunk biker in us all.

If that is not enough motivation to embark upon a self-guided cycling tour of the East Bay beer scene, then I don’t know what is. Let me tell you about a recent, successfully-completed jaunt from which my team and I emerged with double IPA paunches, and a newfound appreciation for the San Francisco Bay Trail (of which you can find maps here: baytrail.abag.ca.gov).

Hook up your handlebars for a pleasant BART ride out to this north-of-Berkeley, family-friendly area, where a cruise of mere blocks will take you to the airy brewpub of Elevation 66 (10082 San Pablo, El Cerrito. (510) 525-4800, www.elevation66.com). Stainless steel fermentation tanks make for tasty eye candy from the bar, where we wound up setting our messenger bags and ordering a sampler flight of seven beers. For such a tiny operation, Elevation 66 offers a swath of pours: on tap the day we visited were seven of its in-house brews, including a heavenly Contra Costa kölsch, the perfect light beverage with which to begin a day of exercising and drinking, and five guest pours, of which we tried a bubbly, sweet Two Rivers blood orange cider. Important matters settled, we tackled the extensive food menu, which stocks homemade potato chips, a Peruvian causa made with poached prawns, avocados, Yukon potatoes, and habanero, and more.

Note the USDA community garden that will zip by on your right (at 800 Buchanan, Berk.) as you emerge from the Bay Trail into the Albany-Berkeley area, home to some of the largest breweries in the East Bay, besides of course the mega-fermenters at the Budweiser factory in Fairfield.

Your first stop will be at Pyramid Alehouse (91 Gillman, Berk. (510) 528-9880, www.pyramidbrew.com), and though you may find the quality of some of the beers at this Seattle-born chain brewery to be just about what you’d expect from a space tinged with notes of T.G.I. Friday’s, you can make a game of counting the pyramids incorporated into the décor for extra stimulation. If you dare, embark upon a 40-minute free tour given every day at 4pm by a bartender who may or may not include gems like: “if you like metaphors, you’ll love this one.” At any rate, it’s a good primer for people who have no idea how beer is made and it includes tons of free booze at the end. Check out Trumer Pils Braueri (1404 Fourth St., Berk. (510) 526-1160, www.trumer-international.com) a few blocks away for another free tour that runs daily at 3:45pm.

Head back to the Bay Trail, unless you feel like a trip further inland to Berkeley’s two fun brewpubs Jupiter (2181 Shattuck, Berk. (510) 843-8277, www.jupiterbeer.com) and Triple Rock Brewery (1920 Shattuck, Berk. (510) 843-2739, www.triplerock.com). Between Berkeley and Oakland you have three lovely miles of trail ride, and if I’m not mistaken we are in the thick of blackberry season, which means the indigo clumps you’ll see on your right just past Sea Breeze Market and Deli (598 University, Berk.) are ripe for picking.

You could while away a day within just a few blocks in downtown Oakland, such a prime sitting-out-with-a-microbrew kinda neighborhood it is.

In terms of places that make their own brew, there is none better than the 1890s warehouse building that houses Linden Street Brewery (95 Linden, SF. (510) 812-1264, www.lindenbeer.com), the little brewery that could. There’s only a few meters in between tank and tap here, and on weekdays you can sit in the joint’s tap room and suck down golden pints of its Urban Peoples’ Common Lager, while hearing the story from the bartender of how it came to the forefront of Oakland’s craft beer scene.

You may not even guess, right off the bat, that Pacific Coast Brewing Company (906 Washington, Oakl. (510) 836-2739, www.pacificcoastbrewing.com) is brewing the suds that wind up in your $9/five beer sampler — but it is. The charming brick pub has all the fried pickles one has come to expect from a solid bar menu, and a latticed patio that provides a little privacy from the Oakland cityscape. Out front, you can park your steed and walk it out — the rest of your stops are within stumbling distance, unless you’re trying to really make a day of it and head south to Drake’s Brewing (1933 Davis, San Leandro. (510) 568-2739, www.drinkdrakes.com) and its tucked-away pint parlor.

The Trappist is a classy, under-lit place with two bars and an elegant rotating list of beers at each, some local and some from far-flung locales. On our visit, we tried a trio of superb sour beers, including the transcendent red-brown Belgian Rodenbach Grand Cru. Trappist’s food menu is full of elegantly spare, small plates packed with big flavors, like a recent Mahon Reserva cheese platter with truffled almonds and shisito peppers. I’m no meat eater, but I heard rave reviews of the comparatively proletarian Trappist dog, which was studded with bacon and seemed an apt pairing for a beer that may out-class you.

Beer Revolution, as the name would imply, is a populist place — local brewers regularly roll through to share their fermentation philosophies. Though their draft menu is impressively large, the beauty of this place is variety. Inside the bar there is a vast refrigerator land where bottles await for your to-go/for-here fancy. We vote for-here, because you’ll want to savor every drop of your East Bay booze cruise.