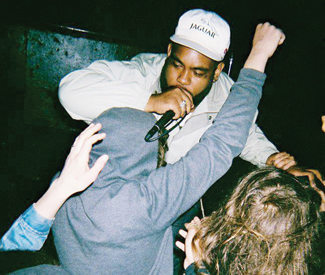 MUSIC By now, Antwon’s mug has probably nestled somewhere in your brain. It’s hard to take your eyes off him in the Brandon Tauszik-directed video for Antwon’s song “Helicopter,” slowly spitting rhymes over a screaming alarm of a beat, wandering Oakland, drinking on porches, pouring hot sauce on breakfast in between scenes from the classic film, Bullit (1968). Or as one media outlet breathlessly noted, “Malt liquor, Steve McQueen, and Sriracha!”

There he is in the Mission District, in the flesh, taking time out to chat with me; the San Jose-based rapper (who’s more often found in Oakland) travels to the city twice a week to work at vintage clothing shop New Jack City, an eye-popping gem of a store, stuffed with letterman’s jackets, button-downs, and gently worn Mickey Mouse sweatshirts, mostly plucked from the 1980s and ’90s.

Now here’s his sturdy frame — which, along with his voice, has inspired not-inaccurate comparisons to Biggie — in a warped movie clip run through a VHS player in yet another music video, this time looking straight out of a ’90s positive hip-hop video for his song “Living Every Dream.”

“Living Every Dream,” the wobbly reworking of Suzanne Vega’s a capella cinematic earworm, “Tom’s Diner” (Christian Slater with the baboon heart!) is doubtless one of the standout tracks on End of Earth, an album frankly full of surprising turns.

“I had been wanting to sample that song to make a hip-hop song for really as long as I can remember, [since] high school maybe,” says Travis Egady a.k.a Pictureplane. “It is just a great tempo and loop. I wanted to hear Antwon’s voice on it.”

“He is really relatable… no bullshit artist,” Pictureplane says of Antwon. “[He’s] a rapper you want to be friends with. He is a hip-hop everyman.”

Another side of the everyman comes out on End of Earth‘s more playful “Diamond and Pearls,” produced by his longtime DJ Sex Play (formerly Bad Slorp), who produced all of Antwon’s December 2011 release, My Westside Horizon.

Other tracks on End of Earth such as “Laugh Now,” produced by Wounderaser, and Rpldghsts-produced “Cold Sweat” more recall the hardcore scene Antwon grew up in. A scene he credits with teaching him how to perform. “I learned how to play shows by going to hardcore shows,” he says from his post in New Jack City. There are indeed mosh pits and sweaty dogpiles at his shows, which is unexpected at traditional hip-hop club nights, though those lines seem to be blurring across the board.

In particular “Laugh Now” blurs genre and scene, with themes of isolation, anxiety, and personal demons, tethered by actual howls and dragged out vocals growling “La-a-a-gh now,” and lyrics like “This for the people that talk shit about you/But when they see you they walk around you.”

Antown grew up in Sunnyvale — his mom’s from the Philippines and his dad is from Fresno. In middle school he recorded mixtapes with a friend through a karaoke machine, and sold them at school.

He later performed as his own one-man noise act, warping sound on a SP-303 and running his vocals through distortion pedals. In 2009 he traveled to Philadelphia to join the punk band Leather, but he then returned to his roots. He had rapped before, but really got started again when he came back to California. “It really kind of like, took on a life of its own.”

While for now he’s still based in San Jose, he’s most often found in Oakland, where he hangs out with Trill Team 6 (a loose crew of Oakland DJs, producers, and musicians, including figurehead Mike Melero) who rifle through jackets at New Jack City as we talk. He points to the shoppers and says he’s a part of the East Bay scene, “because of those dudes.”

“I played shows in San Jose, but it was really boring,” he adds, eyes widening. “I like the energy more in Oakland. It feels like when I was younger and just threw parties and it was about having fun and shit. It seems like that same energy is in Oakland now.”

While he’s clearly more connected to the East Bay, some of his biggest and most memorable shows yet have been in San Francisco — he opened last month for Theophilus London at the Mezzanine (flashiest) and played in the sandy Sutro Baths caves earlier this summer (unforgettable) as part of the Ormolycka Cave Series.

“That was my favorite,” he says of the beach cave show. “It was real crazy.”

Up next is his first ever show with Pictureplane — the two will play a Future | Perfect and #Y3K-presented show at Public Works. (The first time they met in person was at a massive EDM fest in the Bay Area, says Pictureplane: “We walked around and took pictures of all the teenage ravers. We watched David Guetta along with like, 50 thousand people together”).

After that Public Works date, a Mission Creek show at the Uptown in Oakland with Cities Aviv, Friendzone, and Chippy Nonstop. But then he may go back underground, or at least, play less frequently in the Bay Area for a bit. His mug might be less on your radar for a hot minute, while he gathers tracks for another full-length, just him and DJ Sexplay this time around.