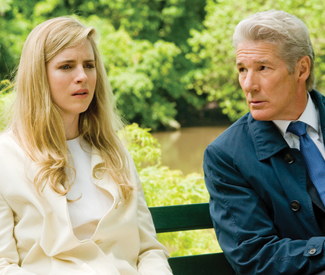 
FILM How might filmmaker Nicholas Jarecki measure the success of Arbitrage, his debut feature about a hedge fund honcho’s attempt to sell his way out of desperate circumstances? Perhaps a gauge can be found in the response the writer-director received at a recent East Hampton screening for a roomful of magnates such as John Paulson, figures who provided some of the initial inspiration for Arbitrage.


"I think the net worth of the room was somewhere around $20 or $30 billion," recalls Jarecki on recent visit to San Francisco. "They came up to me after the screening and said, ‘You know, we really liked the film and we just have to tell you — it made us uneasy from beginning to end. Really, what you put up there is our nightmare.’ I said, ‘Well, thank you.’"


The boyish Jarecki looks as pleased as a high-roller who has just bought low and sold high; he’s crafted a capitalist all-American horror story of sorts, for billionaires as well as the fascinated and repulsed 99 percent. As Arbitrage opens, its slick protagonist, Robert Miller (Richard Gere), is trying to close the sale of his life, on his 60th birthday: the purchase of his company by a banking goliath. The trick is completing the deal before his fraud, involving hundreds of millions of dollars, is uncovered, though the whip-smart daughter who works for him (Brit Marling) might soon be onto him.


Meanwhile, Miller’s gaming his personal affairs as well, juggling time between a model wife (Susan Sarandon) and a Gallic gallerist mistress (Laetitia Casta), when sudden-death circumstances threaten to destroy everything, and the power broker’s livelihood — and very existence — ends up in the hands of a young man (Nate Parker) with ambitions of his own.


It’s a realm that Jarecki is all too familiar with. Though like brothers Andrew (2003’s Capturing the Friedmans) and Eugene (2005’s Why We Fight), Jarecki’s first love is documentaries (his first film, 2006’s The Outsider, covered auteur James Toback), his family is steeped in the business world. Both his parents were commodities traders, and Jarecki, who describes himself as a "computer geek in my youth," once owned his own web development firm and internet access provider, among other ventures. Nonetheless, the filmmaker —who graduated from New York University film school at 19, served as a technical adviser on the 1995 film Hackers, and co-wrote the script 2008’s The Informers — continued to hear the siren call of feature film.


"I had knowledge of venture capital and the markets, but at the same time it was, what’s a credit default? What is this?" he remembers of the time he started writing Arbitrage‘s script in 2008. Bernard Madoff interested him less than "someone who was a good guy but who became corrupted along the way and started to believe in his own invincibility and his own press releases."


Jarecki found his "King Lear-esque" nouveau robber baron in Richard Gere, after convincing the actor to take a chance on a first-time director. He ended up digging in deep with Gere and the rest of the cast during a month of rehearsals, research, and rewrites. "I was doing my own mad arbitrage and putting the film together — the voluminous amounts of documents they make you sign, and I borrowed many millions of dollars from a major bank," Jarecki explains. "So it was rehearsing in one room and calling the wire desk on the other."


As a result, the moviemaker found himself understanding Miller’s part only too well: "When I was writing and the characters had to do something, the person I modeled the decision on was myself. What would I do? And the more surprising and frightening the answers, the more I felt I was onto something."


There’s a memorable moment when Miller’s daughter confronts him on his transgressions and he explains, in a moment of startling, almost lamely ineffectual self-consciousness, that he’s a patriarch simply playing his part. Still, Miller doesn’t believe it’s the end of days for those men gathering in East Hampton screening rooms.


"There was a joke I had with the distributor, ‘Will this still be relevant when it comes out?’" he muses. "Yet every week there’s a new revelation of a new fraud: MF Global losing billions of dollars in customer funds in unauthorized trading. A Knight Financial computer glitch and they lose $420 million — I think that’s the exact number lost in the movie — and it just happened two weeks ago. And now it’s, ‘Where’s my morning coffee?’"