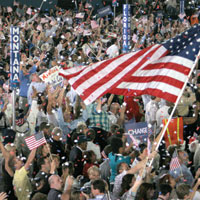 Four years ago, when I watched Barack Obama accept the Democratic Party’s presidential nomination in Denver’s Mile High Stadium, I was hopeful about the prospects for change, but disappointed by his safely centrist acceptance speech. This year, opting to watch tonight’s speech on television rather than being there, the only hope I feel is that Obama will finally focus on fighting for the 99 percent, which seems like his best chance of keeping his job.

Frankly, I had just about given up on two-party politics – cynical about the feckless Democrats, refusing to be driven by fear of Republican boogie-men, ready to advocate for the Guardian to endorse Green Party nominee Jill Stein – when the Democrats speaking at the DNC rediscovered their populism and turned their rhetorical guns on the predatory rich who are exploiting most Americans.

“People feel like the system is rigged against them,” Elizabeth Warren, the consumer advocate and Senate candidate from Massachusetts, told the convention last night. “And here’s the painful part: They’re right.”

Yes, they are right. Most people understand that both the political and economic systems are rigged games controlled by powerful interests, for powerful interests. And it’s good to hear top Democrats sounding that theme again, as First Lady Michelle Obama did Tuesday night and former President Bill Clinton did last night.

Obama has been battered by his bi-partisan approach these last four years. Aggressive conservatives fought his every move, demonizing the first black president in ways that defy reason, labeling him a socialist taking over the health care for pushing health care reform that left insurance companies in charge and requires people to buy coverage, an idea long advocated by Republicans. And Progressives felt like Obama sold them out on issue after issue, from extending tax breaks on the rich to propping up predatory banks to escalating the wars on drugs and Afghanistan.

Now, Obama finds himself in a tight race with a Republican ticket that insanely wants to “double down on trickle down,” as Clinton put it. And if Obama thinks his centrist approach of four years ago is going to win this race – and, more importantly, break the debilitating political gridlock that his conciliatory approach and conservative intransigence have created – then all of us concerned about rising plutocracy could be sorely disappointed.

At this point, I’m not yet ready to place my hope back in a president whose unwillingness to fight for traditional Democratic Party values has delayed meaningful action on this country’s most pressing problems. But tonight, in setting the tone and themes for this election and his second term, my hope is that he makes a change and begins to fight for my side and my vote.

Where to watch: Rather than surrounded by tens of thousands of hopeful Democrats in a stadium, like four years ago, I’ll be surrounded by a few dozen hopeful Democrats at a watch party sponsored by the San Francisco Democratic County Central Committee. Join us at the Laborer’s Local 261, 3271 18th Street, San Francisco. It is from 6-8:30pm and the suggested donation is $25.