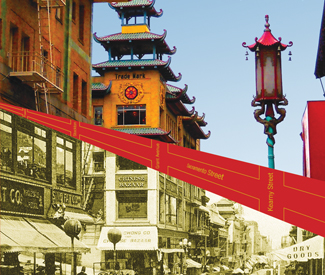 LIT Either I’m terrible at parking or Philip P. Choy was exactly the right person to author his recently-released San Francisco Chinatown: A Guide to Its History and Architecture (City Lights Publishers, 184pp, $15.95). We find a spot for my car in a well-hidden lot, tucked into an alleyway behind the Chinese Historical Society of America. It’s the first sign of the day that Choy’s knowledge of the area goes beyond tea shops and Peking duck.

“Chinatown…” Choy pauses as we stand outside a sidewalk stall whose owner angrily mutters at us (we’re blocking pedestrian traffic by hovering over his dried sea cucumber display.) “Chinatown is real. There are people here living, relying on Chinatown.”

Choy’s newest publication is not just a faithful retelling of the enclave’s social and architectural history. The book goes out of its way to dispel the stereotypes and fanciful constructions of the neighborhood that the outside world maintains. Choy was born in Chinatown, and as a co-professor of the first collegiate level class in Chinese American history at San Francisco State, he’s well-qualified to tell its story.

With apologies to our embattled shopkeeper, we continue to examine the cukes, first brought to the neighborhood via 1800s trade routes between China and the US. We move past other stalls while Choy points out the historical importance of their wares.

He shows me sandalwood, traditionally burned in Chinese temples, and ginseng root, which had been harvested by Native Americans but became a staple Chinese delicacy.

Choy tells me that the Chinese — who were not-so-charmingly called “mongols” around about 1840 — have suffered alongside Native Americans and other people of color throughout our country’s history, enduring ghettoized living situations and sub-par educational offerings.

As Choy and I wander Grant in search of the infamous pagodas that were built after the 1906 earthquake, we take a small detour up the hill to peek at Gordon J. Lau Elementary School. In the late 1800s a Chinatown father sued the city when his daughter was barred from attending other schools. Though the Supreme Court ruled in his favor, the school district opened the originally-named Chinese Primary School rather than integrate.

We pass quickly by an East West bank, which was once the home of the first San Francisco paper, the Star. Around the corner stands a cheap retail center, originally the Mandarin Theater, a cultural and artistic mecca for neighborhood residents. Its once-lavish stage now serves as a platform for garish home decorations, its grand balconies now providing seating only to building debris.

Our whirlwind tour ends at the pagoda building Sing Fat, nestled at the corner of Grant Avenue and California Street. It was erected by the San Francisco Chinese Chamber of Commerce and prominent merchants in a post- 1906 earthquake attempt to repackage the once-funky Chinatown as an ornate, prosperous “oriental city.”

But Sing Fat’s pagodas are actually what Choy (an architect himself) calls a “Disneyland approach” to Chinese architecture: unstudied, inauthentic. The only legitimately Chinese quality of the structure is its green, yellow, and red color motif.

“Does any truly, authentically Chinese institution or edifice exist in Chinatown?” I ask, sidestepping tourists to keep up with Choy, who navigates Stockton Street with shocking deftness.

Choy reaches a hand out to avoid my death-by-delivery-truck and laughs. “Doesn’t exist.”

That’s because Chinatown is first and foremost a Chinese American town. And for all its perceived exoticism, the neighborhood has been around since almost the beginning of San Francisco.

Such is the beauty of Choy’s book. It retells a neighborhood’s story that’s too often render mythic by rumors money-hungry tour guides and ignorant outsiders. San Francisco Chinatown illuminates the untold history of the enclave, urging readers to consider its quiet alleyways and SROs housing six people just above the busy streets. The book wants you to consider the political, historical, and cultural implications of Chinatown’s very existence.

Says Choy of the generations who lived in this neighborhood, “they were pioneers of the city. They did more than just open laundries.”