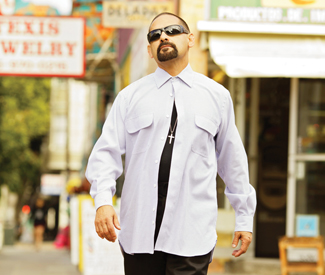 THEATER In 2009, Paul S. Flores was at work on his new play, Placas: The Most Dangerous Tattoo, in consultation with Alex Sanchez, founder of Homies Unidos, when a call came from Denver that brought everything to a standstill.

Federal agents were then cracking down nationwide on Mara Salvatrucha (or MS-13), the notorious Salvadoran gang that arose in 1980s Los Angeles among refugees of El Salvador’s US-fueled civil war and later spread in a loose network across North and Central America. Locally, U.S. Immigration and Customs Enforcement (ICE) had launched Operation Devil Horns on the Mission District’s 20th Street contingent. In Denver, flummoxed MS members called Sanchez (a staunch, internationally-respected Salvadoran-born peace activist whose former MS affiliation made him a natural confidant to some) with news of the raids.

Flores, whose play concerns a Salvadoran family impacted by gang life in the Mission, had already interviewed over 60 active and non-active MS members in Los Angeles, San Francisco, and El Salvador. No easy feat, it required a strict adherence to gang protocol, respecting the conditions set by the subjects for their cooperation.

“I had to hide all my video,” remembers Flores. “I had to give it to the reporter [who was helping us] so he could hold it under First Amendment rights — because I didn’t want anybody coming to my house looking for evidence on any of these guys. It’s not like they were telling me who they killed or who they robbed, but these were active and non-active gang members. If you wanted to find out who was who, you could have looked at my videos.”

The crisis passed, and Flores went back to work. But the moment speaks to the international context and complexity of the subject he had set out to dramatize.

In fact, the project, which did not originate with the playwright, was always rooted in the concerns of the local Latino community (particularly its Salvadoran population) as well as larger socio-economic and political realities. The idea for a play about Mission gangs came from Ana Pérez — executive director of the Central American Resource Center (CARECEN), an organization devoted to immigrant family rights and well-being in the Bay Area — soon after the 2008 Bologna family killings in San Francisco’s Excelsior District, which were linked to MS-13 members. Pérez brought the idea to Andrew Wood, executive director of the San Francisco International Arts Festival, who agreed to help produce it (with Mission Cultural Center for Latino Arts coming in as third co-producer). Together they recruited Flores to write it.

Flores isn’t Salvadoran, he’s of Cuban and Mexican extraction, but as a longtime community and youth violence prevention activist as well as prominent Latino artist (a writer-poet well known for, among other things, his work as co-founder of Youth Speaks), he was clearly the most knowledgeable and expert person around. A Mission denizen since 1995, his work in juvenile hall and counseling centers already connected him to the marginalized and at-risk youth of the neighborhood. And his artistic work specifically bridged youth culture and political theater. Placas — a title referring to barrio slang for tattoos, graffiti tags, or a nickname — would be his sixth full-length theatrical production. Still, Flores admits he had no idea what he was getting into.

“I never thought I’d get in this deep, to being in El Salvador in a prison talking to MS members and getting their permission to interview them. That was very cool,” he says respectfully. “Then realizing what was at stake. Having to meet in secret with these guys, having to pay them to interview them — people’s lives were at stake.”

But his research proved remarkably fruitful, despite initial suspicion from people who thought he was probably a cop pretending to be a playwright. “They didn’t tell me about their crimes,” he explains, describing heart-to-heart conversations with young men eager to dispel characterizations of themselves as monsters or thugs. “They were going to tell me about what makes them hurt and what makes them feel love. And that’s what I was looking for.”

Placas opens this week at the Lorraine Hansberry Theatre — a venue chosen partly for its location in neutral territory outside the Mission, where the rivalry between Sureños and Norteños (Southern and Northern gangs) makes staging the play impossible.

In a crucial coup for the production, its main character, Fausto, is played by Ric Salinas, the Salvadoran-born co-founder of Culture Clash, the now LA-based but Mission-bred Latino theater trio and political-satirical juggernaut. Fausto is a middle-aged former gang member back after deportation and years in prison who hopes to reunite with wife Claudia (Cristina Frias) and teenage son Edgar (Ricky Saenz), who is himself just becoming involved with gang life and resists his father’s belated call to familia. As a condition of his parole, Fausto is also getting his old gang tattoos removed (a literal and serious issue that the play subtly expands into a metaphor for identity and renewal).

“I remember telling him, ‘Wow, I don’t think anyone has ever done this.'”

In a play that draws sometimes verbatim on the real lives of the gang members and former gang members, and the concerns and dynamics of the larger Salvadoran community, Fausto comes particularly indebted to the experiences of Alex Sanchez and another unnamed source the playwright has by necessity kept secret.

Salinas himself, however, shares a particularly violent but formative identification with Fausto, whose opening monologue describes surviving a near fatal shooting — and seeing it as a call to devote himself to his son. In 1989, at the height of the crack epidemic, Salinas was nearly killed in a gang-related shooting, as he attempted to prevent a fight at Harrison and 25th Streets. It had an impact not only on him personally, but on his then-budding career as an artist.

“A 17-year-old kid shot me with a sawed-off shotgun. I survived it; it was a miracle. It gave me a second outlook on life, and it also gave Culture Clash a new outlook: whenever we did something onstage [from then on], it was about something. We weren’t going to just be doing comedy for comedy’s sake.”

Salinas, whose gentle influence on the project has been another important source of the script’s vitality and verisimilitude, is confident the play will not only be involving but will begin conversations long overdue.

“If it starts with the gang, then it will continue with, ‘Ok, who are these people? Who are Salvadorans? What’s a pupusa?'” The actor then recalls with a laugh the song his mother thought should also be represented, a staple of every Salvadoran home.

“It’s ‘La Bala’ by Los Hermanos Flores. So it’s going to be in the play now. This is me educating Paul, and my mom reminding me. It’s really going to be rich in some authentic stuff that’s never seen, you know? But the thing is, it’s going to open up dialogue.”