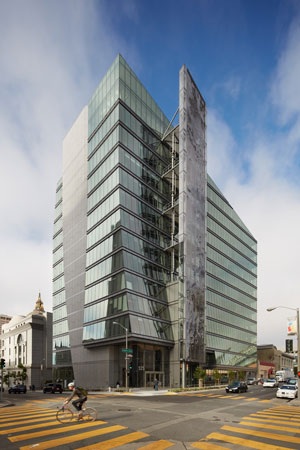 I finallly got a tour of the San Francisco Public Utilities Commission’s cool new building at 525 Golden Gate. It’s about as green as an urban building can be, with solar panels, wind turbines, a wastewater recycling system using the underground root structure of street gardens to clean sewage … the energy use is about 30 percent below a typical building that size, and water use is even lower; the PUC projects about a 60 percent savings, which is a good thing for a water agency that wants to promote conservation. So far, it’s gotten pretty good press.

For a 13-story office building done in a very modern style (not my favorite type of structure), it looks pretty cool, too, with polycarbonate panels that wave in the wind and light up at night. Inside, it’s open and full of light. There’s lots of space for bicycles and an on-site child-care center.

There’s also $4 million worth of public art — most of it purchased or commissioned from local artists. I love the painting and photos, and the cafe on the first floor has a pretty wild giant computerized display that shows the entire water and power system, with interactive popups as you approach different areas.

I was a little disappointed that Ed Harrington, the SFPUC general manager, and Barbara Hale, the assistant general manager for power enterprise, had no idea why the power lines from the city’s hydroelectric facilities in the Sierra end in Fremont, where the city’s power gets plugged into the Pacific Gas and Electric system. “I’ve never heard that story,” Hale said. You’d think that I’d written enough about that tale; you’d think P&E’s role in denying the city its legal right to public power would be part of the official history of the Hetch Hetchy system.

But I forgive them; the story is long and complicated, and very rarely told or taught in San Francisco, which has been scrambling for more than 80 years to duck the Congressional mandate that should force us to kick out PG&E. Because here’s the thing: As he heads for retirement, I think Harrington now gets it.

We sat and talked on the top floor of his new building, in an oddly-shaped conference room with a stunning view, and I got the distinct impression that Harrington and Hale want to move the city toward public ownership of the local electrical system. They’re pushing Clean Power SF, which is a critical step down the path to energy independence; Harrington wants this to be part of his legacy. He’s careful not to say anything that sounds like he wants to fully replace PG&E and create a fully municipalized electric utility in San Francisco, but he can’t ignore the facts: The only way this city is going to get to a sustainable energy future is if we own the infrastructure.

Of course, even if we started today, that would happen long after Harrington’s tenure is over.

But when we talked about the city’s water system, he noted that there are all sorts of important policy decisions that we have only been able to make becuase we own the entire system, soup to nuts, water storage, pipes, delivery. And he didn’t try to argue with me when I said that the same clearly applies to power.

Harrington has made his peace with the energy activists who want to make sure that part of the Clean Power SF program involves buidling our own generation facilities. Even with a full build-out of solar and wind on all the land the city has access to, and with the Hetchy Hetchy hydro system, a municipal utility could probably only generate about 40 percent of the city’s current needs. But knock the current needs down by 20 percent (through better efficiency and conservation) and get every homeowner and commercial building to put solar on the roof, and look at wave energy down the road … and it’s not hard to imagine that 25 years from now San Francisco would have no need to buy electricity from PG&E, Shell Energy, or anyone else.

So here’s to hoping that this slick $200 million building is the start of a new era for SF’s PUC, which in the past has been openly hostile to public power. Let’s hope that when I’m 80 years old I can write my last PG&E/Raker Act story and move on to something else.