Home Chauvinism: Not a good tool for fighting chauvinism 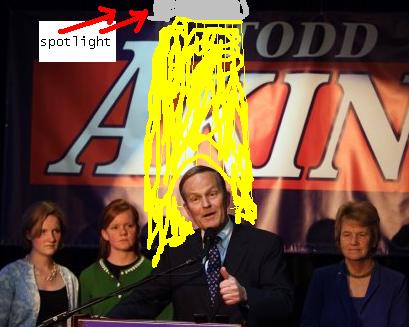 I know we’re all feeling a little queasy from all the Tampa tidings, but let’s remember why we’re here.

Mark Morford’s column on SFGate on Tuesday should have been another smart, snarky putdown of anti-feminist Republican platforming. But it turned out to be even more of a bummer than Condoleeza Rice hiding her pro-choice-ness under a podium.

Here is Morford on Lulli Akin, wife of Todd, a fact which automatically means we should probably just leave the poor woman alone:

Let us move on to… Akin’s wife. There is Lulli, standing next to her man as if dipped in concrete, tight-lipped and hard as a frying pan, looking for all purposes like someone removed her heart 40 years ago and replaced it with a brick.

Akin’s wife appears to us as a wan facsimile of a vibrant, authentic female, something not altogether real, unmoving and unblinking as her husband tries to backpedal violently, saying “No no no, of course rape is a terrible thing, of course women should never get raped, and that’s why I sure hope they stop asking for it very soon because angry Jesus does not like it one little bit.”

Male journos: please erase the phrase “authentic female” from your lexicon. Trust me.

Afterwards, it is AkIn’s two teenage daughters turn, who appear to be at the age least capable of handling critiques of performance on national TV. Morford has this to say:

Oh my God, the daughters. Just look. Look at the two Akin managed to drag on stage with him. It is they who inspired this column. It is they who have a look in their eye like they’ve just been made to swallow a fistful of broken glass. Again.

I hate agreeing with a website whose banner reads “exposing and combating liberal bias,” but Morford, sir! Assessing the female offspring of politicians (really, any gender) based even slightly on their physical appearance is best left to expert assholes like Rush Limbaugh and Glenn Beck.

The column goes onto give condescending well wishes to the girls in their escape from Dad’s ethos system.

Shall we repost the palate cleanser of the week? Take it away Samantha Bee.