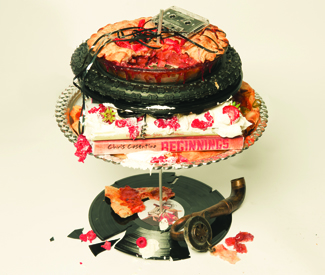 EAT BEAT Good food was never the part of the concert plan. In high school, the punks and shredders ate giant Pixy Stix, filled to the plastic brim with unnaturally purple sugar dust — purchased from the all-ages venue snack counter — followed by late night Del Taco red burritos slathered in Del Scorcho and stuffed with crinkle fries. Flash forward a decade or so, and the vegan Malaysian nachos with spicy peanut sauce and pickled veggies from Azalina’s were all I could talk about after Outside Lands, save for the requisite “oh my god” Metallica utterance.

I wasn’t the only one. From every corner of that packed festival, people — and of course, bloggers — were raving about The Whole Beast (featuring pop-ups from the Michael Mina Group) tucked away by Choco Lands, Andalu’s fried mac and cheese, and Del Popolo’s massive, industrial-looking rustic pizza truck.

While the higher-end meal options have now been going strong at Outside Lands for a few years — and, granted, food has long been a part of the festival equation — the gourmet pop-up thing, and locally-sourced, quality food offerings are on the menu more and more in brick-and-mortar music venues in San Francisco. Last week, the Great American Music Hall hosted an event dubbed the Great American Pop-Up. Seems it’s more open to experimentation in the slower summer months.

The one-off (for now) event was a family affair for the Great American Music Hall. There were six pop-up food vendors set up in between the grand bronze pillars of the Tenderloin venue, chosen by security guard Drake Wertenberger, who stepped forward at a managers meeting to coordinate. Jessica DaSilva, who works in the box office at both GAMH and sister-venue Slim’s, was there selling imaginative sweet treats for Milk Money/Dora’s Donuts Shut Yer Hole Truck, including a strawberry cheesecake push-pop, and the chewy chocolate raspberry cookie I devoured. There was also local, sustainable sushi by Ricecrackersushi, some colorful Asian fusion dishes via Harro-Arigato & Ronin, and a whole lot of sausages sliced by the Butcher’s Daughter.

It felt nearly illicit to be in the venue without the anticipation of a live set, like we were sneaking in. And the warmer lighting opened up the intricacies of the architectural design. But this event was focused squarely on the food, with the tables pushed out onto the floor, and a flannel-clad DJ spinning inoffensive hip-hop while munching on something from a paper plate.

Last year, Slim’s created something similar, but broke it down to one chef at a time hosting rotating gourmet pop-ups once a week for the month of August. Those too were more about the unique food offerings, less about music. There were dinners served in the venue by Jetset Chef Alex Marsh and Cathead’s BBQ (which now occupies its own legitimate space down the street from the venue).

GAMH and Slim’s both already serve dinner nightly at live shows, but publicist Leah Matanky tells me there were no hard feelings from the in-house restaurant staff.

On regular show nights even, Matanky says she’s seen an increase of interest in gourmet food at the venues. “We have seen our kitchen sales numbers increase noticeably over the last couple of years. We’ve started running nightly food and drink specials that include things we don’t normally offer and people have really responded to that. We still offer the full array of bar food…but you can also get gourmet specialties like the baked polenta pizza with smoked mozzarella or the grilled tri-tip steak with garlic-herb potatoes.”

Mountain View’s infinitely larger Shoreline Amphitheater also recently got an in-house food upgrade. So the story goes, when the GM of Shoreline dined at Calafia in Palo Alto, Chef Charlie Ayers pointed out the stadium’s lackluster food, and was then summoned to create a tastier menu. Ayers now has a “Snack Shack” at Shoreline that generates $8,000 per show, selling vegan lentil bowls, pork bowls, and salad wraps with Dino kale and feta cheese.

There was an entirely separate event that took place Aug. 4 in San Francisco, which combined all of this: the high-end food, the live music, the ubiquitous pop-ups. It was a food and music festival (Noisette) at a brick-and-mortar venue (Public Works, where it moved after switching venues from Speakeasy Brewery).

The event was put on by Noise Pop Industries. The production company, which does Noise Pop and the Treasure Island Festival, began dipping into independent food culture a few years back with the Covers dinners, pairing well-known chefs with corresponding cover songs for a relatively small group. Noise Pop’s Stacey Horne came up with the Noisette concept after talking with DJs Darren and Greg Bresnitz of New York promotion company Finger on the Pulse, who do an event out there called Backyard Barbecue, which also pairs live music and gourmet food.

From the beginning, the Dodos were the first choice of headliners at Noisette. Merrick Long is a “professed foodie,” has worked in the restaurant business, and was on a panel at SXSW talking about food and music. Horne says they chose chefs that do things a little differently, and are more attuned to the pop-up mentality.

“Something that struck me at Noisette that I loved was that we were eating such good food and then were able to wander over and hear amazing music. It wasn’t one or the other. It was nice to have that as an option,” Horne says. “The chefs we’re focusing on are kind of the indie version of that world, and that’s what Noise Pop has always been interested in, independent music, independent film and art. It just seems like a logical extension.”

Noise Pop is also again looking to do a variation on the Covers dinners with the upcoming Treasure Island Festival. Sound Bites is more of a passed appetizer event with little bites inspired by the bands playing at the festival.

So what does it all mean? Are we, as the generalized concert-going public, getting soft, both physically from all those readily available treats, and mentally because we’ve expanded beyond a minimalist punk rock lifestyle? Should we all go back to Pixy Stix and Del Scorcho hangovers?

“Look, the reality is that most nights that you go to hear a band in a club, there’s no food or if there is food, it’s not going to be anything great. So you can still have your punk rock experience, but something like Noisette and other events like ours that are popping up around the country are just offering another type of event, and people are interested in it, as we’re seeing,” Horne says.

I guess, if you want to see your life as a black and white cookie, you’ll see this change as against type. Or maybe if you’re in the teenage angst subset, you’re just getting in to the greasy post-concert routine. But perhaps this mashup is just another trend — participate if you will. It goes far beyond the music scene, to the way Americans eat now, looking for quality, locally sourced food, seeking creative options.

“Speaking for myself personally, I still love going to see shows,” Horne says, “but if I can have both things in one place, it’s win-win.”