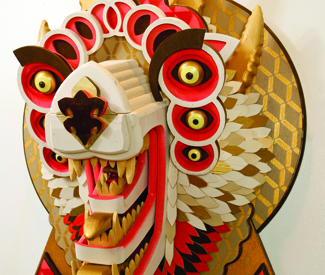 FALL ARTS In a workshop far north, in the wilds of Portland, a man creates wooden monsters. But they’re gorgeous, these beasts: vertigo-inducing whorls of eyes and mouths and thousands of pin feathers. So entrancing are the works of artist A.J. Fosik that you want to trip and fall into the maw of one of his riotously colorful works, preferably while on whatever drug their maker was partaking in when he laboriously cobbled them together. (perhaps also while listening to Mastodon.) Fosik will bring the wolfpack south to Guerrero Gallery for a show beginning Nov. 10.

SFBG: I’ve read that your sculptures are meant to ape religious icons and the zealotry that surrounds them — is that true of this latest series?

A.J. Fosik: It is true. If religious people would stop being such colossal dickheads I would have a lot more time on my hands to pursue hobbies.

SFBG: High-falutin’ theories of faith aside, do your beasties have names, personalities?

AJF: They are characters in an archetypal sense, not in a my name is Dave sense. They are manifestations of the apparently inescapable human need to put a face to the unknowable in some sort of attempt at easing our existential angst. Ideally, I would like them to serve as inspiration to move past that way of thinking and embrace the unknowable. Sometimes [they have names], mostly they are named after the ideals of a humanity better than ours.

SFBG: Where do they live?

AJF: The same place all deities do, in your head.

SFBG: They’re so attention-grabbing — during the creation process, how do you relate to them? Do you have conversations?

AJF: I breathe life into them through their nostrils. Each piece receives a command written on parchment and rolled up, which is then placed in their mouths and compels them to obey.

SFBG: How long does a standard piece take you to make?

AJF: It takes a few splinters per hand and a couple of thousand pin nails.

SFBG: If you could engineer your beasts to perform a mechanical function, what would it be? You can say “eat people.”

AJF: I would like them to be able to take a precision slice from the part of the brain of every thick-skulled mouth breather that is responsible for holding onto the idea of faith as a virtue. Either by tooth or by claw they could slowly replace the justifications of so much hatred and replace them with the urgency of this life. Or they could regurgitate cheeseburgers to order.

SFBG: Your work is incredibly detailed. Why so elaborate?

AJF: If I stop working then I have to drink. When I start drinking, out come the wolves. It’s a safety measure. Also, DMT.

SFBG: Does anyone out there have a wall of Fosik pieces, like a psychedelic version of one of those wild imperialist British hunters?

AJF: If it does exist then I am insulted that my invitation has failed to materialize. If you’re reading this I can bring booze and firearms on short notice.

SFBG: Describe where you’d most like to see one of your works installed.

AJF: That’s sort of an odd thing at the moment. It really doesn’t seem to matter as much where the physical piece ends up, its real life is on Tumblrs and blogs or wherever else. If they don’t have teeth there they haven’t really lived.