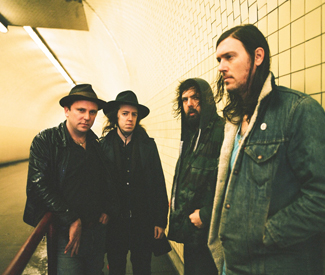 FALL ARTS “You’re at the right place,” Tim Cohen mutters, holding a large laundry sack swaddled like a burrito to his chest as he walks up to the tri-level white Victorian on McAllister Street in San Francisco’s Western Addition. A prolific singer-songwriter with morose pop vocals and a gruff exterior, Cohen is preparing to once again tour with his band, the Fresh and Onlys. And Cohen is flying out to the East Coast earlier than the others so he can play a few shows in his other incarnation, Magic Trick.

After dropping off his laundry sack upstairs in the top tower of the Victorian, Cohen climbs down the steps and stands against a railing on the front stoop with the band’s newest member, pony-tailed drummer Kyle Gibson, who really isn’t all that new. Gibson’s first show with Cohen, bassist Shayde Sartin, and skinny, pompadoured guitarist Wymond Miles, was at Noise Pop on Feb. 26, 2009. Before he came along, the band dilly-dallied around with a bunch of different drummers for around eight months, says Cohen.

The cohesive four-piece hit the ground running, creating psychedelically swirled darkly moving garage and psych-pop in home recording studios, and releasing records and EPs at a dizzying speed, touring nearly nonstop through the past three years.

Now signed to Mexican Summer, the Fresh and Onlys have slowed down a bit, spending the end of last year recording 2012’s Long Slow Dance (which sees release Sept. 4), their fourth long-player and first since 2010’s noisier Play It Strange. This fall they’ll again pick up the pace, and tour the West Coast, East Coast, and Europe through early next year.

“I feel like this is the record we all wanted to make, we’ve been wanting to make this record for a long time,” says Miles, who slinks up last to Cohen’s stoop on this unseasonably warm summer day in SF. If not for the occasional cool breeze, the day would be downright hot. I ask him to expand and he laughs and says, “Take it, Tim.”

Moods come up frequently in both the stoop conversation and the record itself. The dark poetic drawl is inherent within Cohen, that Morrissey-Robert Smith pain paired to jangly pop. Album opener “20 Days and 20 Nights” has a classic hook, but matched to Cohen’s words, it’s actually quite sad. “Something so heavy/in my mind/I think I want to try and get it out/So I cry/and I cry.”

Many of Cohen’s lyrics come lifted from his dreams, so naturally he keeps a notebook by his bed in the tower. “When I write something down, I’ll look at it a few days later and be like, ‘wow, that’s kind of strange,’ and I’ll usually turn that into something.”

He feels he may be subconsciously influenced by the absurdist and surrealist fiction he reads, by authors such as Kafka, and conversely, classic radio pop. On jangly “No Regard,” he opens with “ever wonder why fools fall in love?”

“I don’t know how aware Tim was of Frankie Lymon when he wrote it,” says Sartin. “Not only is it a classic lyric, it’s a classic sentiment in pop culture in general. Whenever you hear that song, Frankie Lymon still lives, even though he died a miserable death.”

After a hot pause of silent remembrance, Sartin continues, “So I think sometimes those things pop up in Tim’s lyrics. They get mangled by the time they get to the pen and paper in Tim’s hand or onto the record for that matter.”

“That’s exactly right,” Cohen says. “What I intend to do with lyrics is make them clear cut with a twist. Put sad lyrics over happy music, or happy lyrics over sad music, just to create a juxtaposition of moods that’s a more compelling listen.”

Gibson pops up, “Morrisseying. I made Morrissey a verb. That’s what he would do, he’s one of the best at that. So really macabre and dark over this like, jangle.”

While Cohen is the frontperson and lead lyricist, he doesn’t always get his way. He’s quick to bring up the example of “Foolish Person,” a dreamy ’80s-esque pop song — which dissolves into battling psychedelic guitarwork — that made it on Long Slow Dance after at least three different iterations. “Some people in the band really wanted to see it through, to see it to completion. I wasn’t totally into the idea, but I’m sort of glad we did it,” he says with a sniff. “At least, I never have to record it again.”

Gibson laughs, slipping on his sunglasses.

The band has had their share of rough spots, especially during grueling tours, but they’ve learned to communicate. “We wouldn’t have lasted this long if we couldn’t reign that toxicity in, and direct it elsewhere,” Cohen says.

The keys to the Fresh and Onlys’ success, both personally and musically, include their diverse sonic backgrounds, and relative age. Unlike youngster bands, the four musicians were already established, and had played in previous bands (including Black Fiction, and Kelley Stoltz’s band), when they came together all hovering around the age of 30.

Each blasted a different kind of noise from their childhood stereo. Cohen listened exclusively to hip-hop in Virginia (“I just listened to the way people put their words together. I would never really go off the beat — I never really have, I’m not really capable of this shambolic, careless approach to words and vocals.”). Miles came from an array of guitar schools of thought in Denver, Colo., listening to the Cure, goth, punk, and hardcore. Sartin came from the Florida punk scene, but also loves country, and his bass-playing is rooted in soul music. From DC, Gibson listened to punk and Dischord bands, which justifies his muscular drumming.

“In a fearless way, we welcome each others music genealogy into the fold,” Cohen says.

The band also thrives thanks to its San Francisco location. “I can call up any of my friends and say ‘let’s go play music.’ And if they don’t want to do it, someone else will,” says Sartin, adding “We also have a ton of inspiration from other people who live here, other bands, other artists.” He mentions former Girls drummer Garret Goddard, and Gio Betteo from Young Prisms, along with perhaps the most prolific musician in San Francisco, aside from Cohen, Thee Oh Sees’ John Dwyer (formerly of Pink and Brown and Coachwhips).

“You can have a conversation with John Dwyer and go fucking write three songs, just off the energy absorbed from him barking at you,” says Sartin.

All four musicians on the stoop shake their heads in agreement.