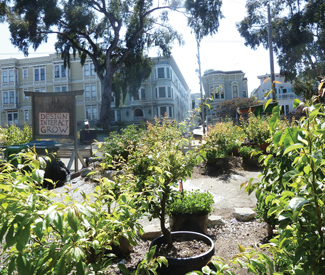 In the next few months, San Francisco will lose some of its most beloved urban farms.

The City Hall victory garden is now reduced to dirt. The grants that kept afloat Quesada Gardens Initiative, which creates community gardens in Bayview, were temporary and are now drying up. Kezar Gardens, funded by the Haight Asbury Neighborhood Council recycling center, is facing eviction by the city.

Time is up for Hayes Valley Farm, on the old freeway ramp, where developers are now ready to build condos.

St. Paulus Lutheran Church has also announced that it wants to sell the land that the Free Farm uses at Eddy and Gough.

“There’s the old joke about developers,” said Antonio Roman-Alcalá, co-founder of Alemany Farm and the San Francisco Urban Agriculture Alliance. “God must be a developer, because they always seem to get their way.”

At the same time, new urban agriculture projects have sprung up across San Francisco. Legislation authored by Sup. David Chiu will create a city Urban Agriculture Program, with the goal of coordinating efforts throughout the city.

So is the movement to grow food in the city progressing? It’s a tricky question that gets down to one of the oldest conflicts in San Francisco: The best use of scarce, expensive land.

THE VALUE OF FARMING

According to the report, the city had “nearly 100 gardens and farms on both public and private land (not including school gardens),” two dozen of which started in the past four years.

But that’s nowhere near enough for the demand. “The last time waiting lists were surveyed, there were over 550 people waiting,” Eli Zigas, Food Systems and Urban Agriculture Program Manager at SPUR, told us. “That likely underrepresents demand because some people who are interested haven’t put their name down.”

Changes in zoning last year, and the recent ordinance to create the Urban Agriculture Program, show a measure of city support for urban farming and gardening.

“We have one of the most permissive zoning codes for urban agriculture that I know of in the country,” said Zigas.

One zoning change from 2011 makes it explicit that community gardens and farms less than one acre in size are welcome anywhere in the city, and that projects on larger plots of land are allowed in certain non-residential districts.

More recent legislation is meant to streamline the process of starting to grow food in the city. Applying to use empty public land for a garden can be an arduous process, and every public agency has a different approach. The hoops to jump through for land owned by the Police Department, for example, are entirely different than what the Public Utilities Commission requires. A new Urban Agriculture Program would coordinate efforts.

“The idea is to create a new program that will serve as the main point of entry. Whether it will be managed by existing agency or nonprofit is to be determined,” said Zigas.

If the timeline laid out in the ordinance is followed, the plan will be implemented by Jan.1, 2014.

By then, if all goes according to plan, no San Franciscan looking to garden will wait more than a year for access to a community garden plot.

Roman-Alcalá said that efforts to clear the way for urban agriculture are much less controversial than for affordable housing and other tenets of anti-gentrification. But for all the good the latest legislation does, it doesn’t secure a single square foot of land for urban agriculture.

“If you look at the language, there’s nowhere in it that mandates or prioritizes urban agriculture on any site,” said Roman-Alcalá. “The closest thing is a call for an audit of city owned rooftops. That’s the closest it comes to changing land use.”

And it won’t be easy. “No matter how much support there is for urban agriculture, in the end, developers and their ability to make money is going to be prioritized,'” he said. “The only way to really challenge that right now is cultural. Social change is not an event but a process.”

Janelle Fitzpatrick, a member of the Hayes Valley Farm Resource Council and a neighborhood resident who has been volunteering at the farm since it started, is committed to that process.

“Hayes Valley Farm proves that when the city, developers, and communities come together, urban agriculture projects can be successful,” Fitzpatrick said. She and dozens of other volunteers created the farm, which is now lush with food crops, flowers, and trees. The farm has a bee colony, a seed library, and a green house. It offers yoga and urban permaculture classes.

Hayes Valley Farm started on land that used to be ramps to the Central Freeway before that section was damaged in the Loma Prieta earthquake. The land under the freeway was toxic, but volunteers spent six months layering mulch and cardboard and planting fava beans to create soil. It took less than a year to create a productive farm on a lot that had been vacant and overgrown for nearly two decades.

When they vacate their land in the winter, many Hayes Valley Farm team members will already be knee deep in new urban agriculture projects. These include Bloom Justice, a flower farm in the Lower Haight that Kroll says will teach job skills like forestry and landscaping. The farm has also built a relationship with Hunters Point Family, working together to offer organic gardening and produce at Double Rock Community Garden at the Alice Griffith Housing Development and Adam Rogers Community Garden.

As for the loss of the current site, Kroll says, “It’s an exercise in detachment.” Change in landscapes and ownership is part of urban life, she said — “We’re a city of renters.”

We’re also a city of very limited land. “Securing permanent public land for urban agriculture would be challenging,” said Kevin Bayuk, an instructor at the Urban Permaculture Institute. “And securing long-term tenure on anything significant, an acre or more of land in San Francisco, if it were on private land, would be cost prohibitive.”

Of the city’s three largest farms, only Alemany Farm seems secure in its future. The farm is on Recreation and Parks Department land, and has been working with the department since 2005 to create a somewhat autonomous governance structure.

Community gardens on Rec-Park land are subject to a 60-page rulebook, and according to Roman-Alcalá, Alemany Farm’s operations were restricted by the rules.

Last week, the group’s plan to be reclassified as a farm instead of a garden was approved, eliminating some of the rules and creating an advisory council of community stakeholders that will exert decision making power over the farm, although Rec-Park still has ultimate authority.

“I think the urban agriculture movement is still growing and burgeoning in the grassroots sense,” said Bayuk. “And I think some of the grassroots growth is reflected in the policy and code changes. “I’m optimistic for the idea of people putting land into productive use to meet human needs and be a benefit of all life.”

This article has been corrected to reflect information about the location and ownership of the Free Farm.