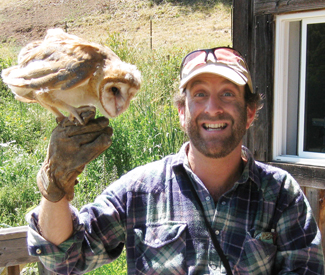 HERBWISE Author Doug Fine’s last book, Farewell My Subaru, is about the year he moved to a secluded New Mexico farm and attempted to live without petroleum. He’s just as creative about advocating against the War on Drugs as is his against fossil fuel dependency — for his new book Too High To Fail: Cannabis and the New Green Economic Revolution Fine spent a cannabis season living in a Mendocino grow town. He’s been getting love from his recent appearance on Conan, but we caught up with him via email for some real talk while he was en route from his home, a.k.a. the Funky Butte Ranch, “hurtling toward live events in Colorado in an ’87 RV.” He’ll be in town this week doing readings, so read up here and bring him questions to his Booksmith reading on Wed/22 and his event for cannabis patients at Harborside Health Center on Fri/24.

SFBG: What are you adding to the discussion on cannabis legalization with Too High To Fail?

Doug Fine: I relocated to Mendocino County, and for 10 months covered the county’s successful efforts to permit sustainable cannabis farmers. I followed one flower named Lucille — for reasons that have to do with the neighbor of a farmer I followed — from farm to liver cancer battler.

Mendocino’s “zip-tie” [cannabis farm permit] program was so successful in 2011 that it was about to be emulated in several other counties in the Emerald Triangle. With 100 tax-paying American small farmers coming above ground to declare themselves legitimate, the county raised $600,000 and saved seven deputy sheriff positions. The practitioners of a profession that generates 80 percent of the county’s revenue could now be part of society. Then, just before harvest, the DEA raided the most prominent zip-tie farmer, and the US Attorney threatened the county Board of Supervisors with arrest if they didn’t effectively cancel the program. Which they did.

SFBG: Would you say you have a different writing style than others who have tackled the War on Drugs?

DF: It’s kind of comedic investigative journalism. Since I don’t only want to preach to the converted on any issue, I think the humor draws people in as they see I’m a regular guy, a dad, an American, and not some kind of radical pushing an agenda. I try to laugh my way to the truth.

SFBG: In your opinion, why isn’t cannabis legal today?

DF: Pat Robertson wants to end the Drug War, my cowboy hat-wearing senior ladies at the post office in my New Mexico canyon want to end it. Everyone’s ready except Congress. Even a DEA spokesman said when I asked why the zip-tied farmer was raided, “If you don’t like the Controlled Substances Act ask Congress to change it.” And it’s up to us as voters to do just that: get cannabis out of the CSA and allow states to regulate it like alcohol. It’s win-win: a $30 billion infusion into the economy annually that will cripple the cartels.

SFBG: Do you smoke weed?

DF: I have used it. I think it’s a good plant. My general take on it is a spiritual one. The Bible isn’t vague on this. It’s in Genesis, not bured way back in Numbers. Chapter 1, Verse 29 says: “You shall have all the plants and seed-bearing herbs to use.” Not “unless one day Richard Nixon decides he doesn’t like one of them.”

SFBG: I hear you live with goats?

DF: Yep, I generally see as many goats on a given day as I do humans. I meditate with my goats and live on their yogurt, cheese, and, most importantly, their honey-cardamom ice cream.