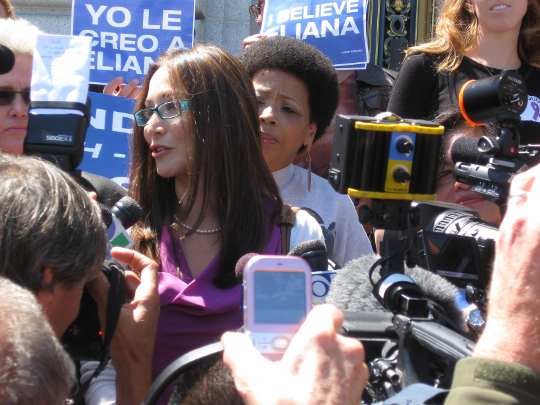 Eliana Lopez once again stole the show as the Ethics Commission Thursday debated the “ethical fate” of her husband Sheriff Ross Mirkarimi inside City Hall while the Stand With Ross forces and their opponents staged back to back rallies on the City Hall steps.

Eliana sat with and supported her husband during the morning at the hearing on the misconduct case and then made an early afternoon dramatic entrance to the Mirkarimi rally. (The commission later Thursday unanimously rejected most of Mayor Ed Lee’s official misconduct charges against the suspended sheriff but voted 4-l to recommend the Board of Supervisors find him guilty of official misconduct for grabbing his wife’s arm on Dec. 31 and pleading guilty to the resulting misdemeanor charge of false imprisonment.  See Steve Jones Guardian blog.)

Eliana was greeted with cheers as the tv cameras and reporters crowded in on her.

She spoke with ease and authority, greeted many friends, spoke in Spanish to several Spanish language radio and television reporters, and walked easily through the crowd shaking hands and talking with supporters in two languages.

“We don’t want any more hate,” she said. “We want love.” She said the case was
“about democracy” and she said that the community stands behind her husband.

I asked her about her plans.  She said she had finished her movie in Venezuela and was back living with Ross in their home with their young son Theo.   “I have good feelings,” she said.

The two groups worked out an informal modus vivendi.  The Remove Ross group had a permit for using the steps so they went first with their press conference rally with banners saying “We stand with survivors” and “The facts do matter.” Their group was largely from the three organizations leading the charge against Ross, La Casa de las Madres, Domestic Violence Consortium and Futures Without Violence.

The Mirkarimi group initially gathered across Polk Street, waved signs and chanted “Stand With Ross.” The group then got a permit to use the City Hall steps and held its rally after the first rally ended.  Sharon Hewitt, executive director of the Community Leadership project, said that the city owed an “act of apology for the violence” that it had caused to Ross and his family.

The police officer on duty estimated to me that there were 40 or so in the domestic violence group. My count was about 50 or so.  The Stand With Ross group had more people and they were more spirited in their chants and marching.