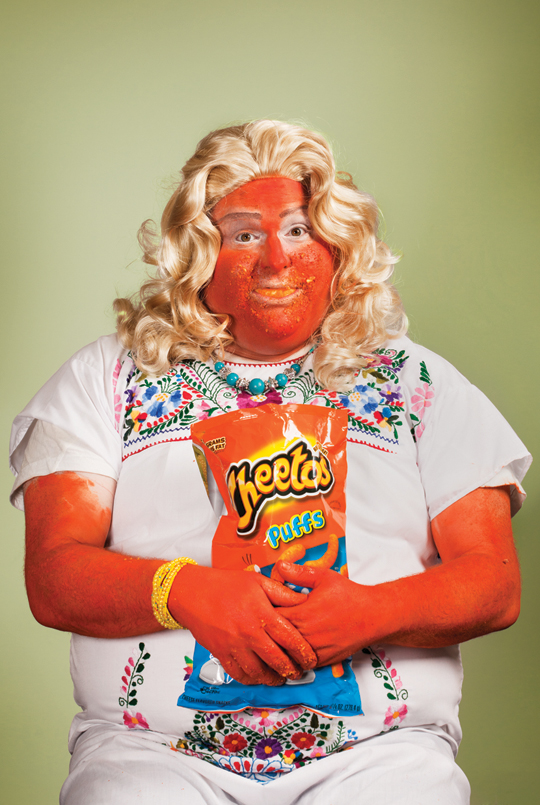 To celebrate the incredibly engaging Cindy Sherman retrospective at the SF MOMA (through October 8), we asked four of San Francisco’s premier drag performance artists to re-enact four of Sherman’s iconic portraits. It’s all about looking twice — or in Sherman’s case, four or five times — and we wanted to see how many layers of gaze her work could hold.

The truly artistic Fauxnique, aka Monique Jenkinson, currently holds a fellowship through the de Young Museum: she’ll be Artist in Residence for the month of September in the de Young’s Kimball Education Gallery, working in an open studio setting, co-hosting “Dance Discourse Project #13: Working in Museums” with Dancers’ Group and CounterPULSE on Saturday, September 15 at 2pm), and making new work, including “Instrument,” a solo created in an experimental collaboration with choreographers Chris Black, Amy Seiwert, and Miguel Gutierrez premiering at CounterPULSE in November.

A relative newcomer to the scene, Boy Child stretches drag performance into phantasmagorical new directions, mashing neon hip-hop swagger into goth-electro darkness. Lately, she’s been representing SF in New York and the Pacific Northwest and gaining attention for her photography.

One of the only queens who could have most of SF’s colorful nightlifers dancing the hora to “Hava Nagila” at her Bar Mitzvah x2 party — or falling on their bums at her annual rollerskating birthday jam — Lil Miss Hot Mess will be stepping down as Miss Tiara Sensation during next month’s pageant (Saturday, September 29, 9pm, $10-$20. Rickshaw Stop, SF. www.rickshawstop.com) and enrolling in grad school, to begin her new life as a career girl.

Always elegantly but firmly large and in charge, Lady Bear hosts monthly parties Hot Rod at the Powerhouse and Dark Room at the Hot Spot here in SF and Cub Scout at the Eagle in LA. As Dragoon the actress, she’s currently starring in the uproarious “Designing Women Live!” (Tuesdays through August 28, 8pm, $20. Rebel, 1760 Market, SF.) and the upcoming “Roseanne: The Play” in September. She also recently starred in a short film, Love and Anger, with Cousin Wonderlette.