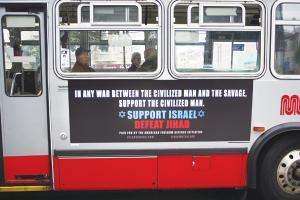 How far can you push free speech? Is it okay for Muni to run ads that are utterly, inexcusably offensive to Arabs and Muslims in the name of political expression?

I’m pretty much always on the side of the First Amendment. And we were furious when a Bay Guardian ad campaign accusing then-mayor WIllie Brown of political corruption suddenly vanished from the sides of the local buses. It’s hard to seek government limitations on any political statement. But if the ads that appeared Aug. 7 on Muni aren’t over the line, they’re pretty close to it.

Here you have an organization described not only by the Southern Poverty Law Center but by the Anti-Defamation League as a hate group buying space on San Francisco buses for ads that effectively disparage a vast religious, ethnic and cultural community as “savages.” The campaign is obviously designed to get publicity; not that many San Franciscans are going to be convinced to join the American Freedom Defense Initiative. Nobody’s opinion on the Middle East will be swayed by this shit.

But this tiny cadre of loonies, led by Pamela Geller, who is really fucking scary, wants attention. In New York, the anti-Muslim group sued when the city tried to take down the same bus ads, and you know they’d love it if that happened here. Muni says it can’t legally pull the ads, which is probably true — although BART has a more restrictive policy.

Obviously, you can’t run ads that enourage someone to engage in violence. Is dehumanizing people and calling them “savages” the same thing? Biloo thinks it’s pretty close: “It’s important for progressive cities to say, ‘not in our city,'” she said.

A change.org petition condemning the ads has more than 2,000 signatures.

On the other hand, I don’t want to give Geller the pleasure of suing San Francisco and making this into a Free Speech cause. Because that’s exactly what she wants, and probably the reason she bought the ads in the first place. So how about this: The supervisors pass a resolution denouncing the ad and the message, and Muni agrees to give CAIR the same number of ads, free, in the same locations (gee, maybe even on the other side of the same buses) to present an alternative message.

At least it’s a start.