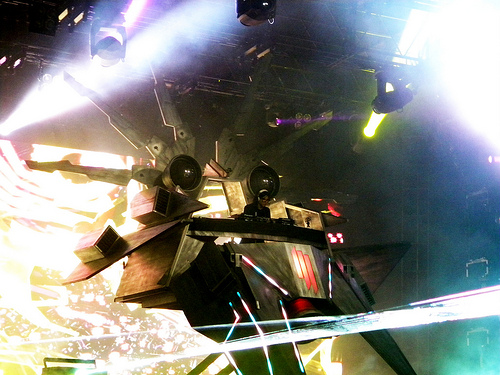 Surveying the rabid Skrillex crowd, I felt old for one of the first times in my life. Like, John McCain, “get off my lawn” old. Who the hell was this mall punk with a Miley Cyrus haircut, anyway? What, in God’s name, has he inflicted upon the music world? And why, oh why, did this hoard of tweens, bros, and “cool-dads” choose to undergo Skrillex’s sonic weedwacking, instead of running into the arms of living-legend Stevie Wonder?

Having committed the cardinal sin of leaving the main stage as Stevie ripped through “Signed Sealed Delivered,” I guess I was setting myself up for a repellant EDM experience. Seriously, how could a brostep-practitioner (let alone a DJ) compete with a 14-piece band, diving into one of the greatest back-catalogues in pop history? However, as I approached the Twin Peaks stage, and the barrage of twisted noise and splintered video-projections came into focus, I found myself not just underwhelmed, but vaguely, viscerally offended as well.

As Skrillex’s formulaic dynamics ran their course (laborious, heavy-handed tension, building up to the inevitable “beat drop”), and the rigidly brimmed bro-hats in the audience bobbed up and down with militaristic synchronization, it dawned on me: the guy’s music is doomed by a perfect storm of chaos and joylessness. Say what you will about Metallica’s brand of contrived assault: their set was fun; Skrillex’s audience was enraptured, alright, but in a much more fascistic sense. Let’s just say that the image of Apple’s famous 1984 superbowl ad was a difficult one to shake.

I’d try to describe the Skrillex aesthetic, but is there anything that hasn’t already been said? Yes, there were lots of “womp-womps,” crashy noises, and syncopated Michael Bay sound effects piled atop the simplistic chord progressions. Factor in the predictable buildups and payoffs, and the seizure-inducing visuals, and you have a concertgoing experience with all the warmth and charm of a monster truck rally. Which isn’t to say that noise and chaos can’t be used compellingly. Hype Williams, Death Grips, and Black Dice are all capable of wringing anarchic perversity from their shards of noise, without sacrificing any sense of joy or wonderment.

Okay: I’ll concede that Skrillex’s music possesses an experimental edge. Also, it’s somewhat refreshing to see Middle America being turned on to the possibilities of dissonance in music. But, whereas even a quasi-countercultural figure like Trent Reznor would look out of place in front of a Bud Light logo, Skrillex looks perfectly at home. Unlike true boundary-pushers like Throbbing Gristle, Skrillex’s product is the dream-material of hair-gelling Viacom executives: an endlessly commodifiable brand of pseudo-punk rebellion, perfectly calibrated to sell energy drinks, college football, and the military-industrial complex, all while the bro-hats nod away.

After 10 minutes of Skrillex’s sonic cheese-grating, I was more than ready to head back into Stevie’s sunny embrace. As I heard the clavinet riff from “Superstition” fade in gradually on the walk over, I knew I had made the right decision. Maneuvering through the main stage crowd to make my way towards the action, the mood reversed completely, as Stevie made up for Skrillex’s joy-deficit, and then some. With three drummers, a brass section, an army of keyboardists and guitarists, and a few beautiful backup singers in tow, the pop master sported the swagger of 100 Skrillexes, without any of the gnarled, meatheaded machismo.

Therein lies the genius of Stevie Wonder: his ability to radiate joy, groove relentlessly, and even get political, with stunning cohesiveness. Just because “Higher Ground” and “Living for the City” possess sober lyrical content doesn’t mean you can’t dance your ass off to them. Elsewhere, “Sir Duke,” “I Wish,” and “Happy Birthday,” had the diverse crowd in a frenzy, dancing and singing along to some of the most infectious choruses ever written.

After initially taking the stage, armed with a Keytar to cover Marvin Gaye’s “How Sweet It Is,” Stevie jumped restlessly between a handful of instruments, displaying his virtuosity on the clavinet, piano, harmonica, and lap steel guitar. It was a welcome reminder (and a great introduction, for the uninitiated) of Stevie’s extraordinary musical talent; after all, he’s the visionary who recorded Talking Book (1972) completely on his own, drums and all.

Shuffling through a wide range of covers (Smokey Robinson’s “My Girl,” The Beatles’ “She Loves You,” and most memorably, Michael Jackson’s “The Way You Make Me Feel), as well as a hit parade of original material, Stevie’s set was an exuberant, poignant trip through a lifetime of pop brilliance. Young and old, black and white, no one could resist Stevie’s charm. Whereas Skrillex was signed on to appease a fixed set of demographics, Stevie came to play for everyone.