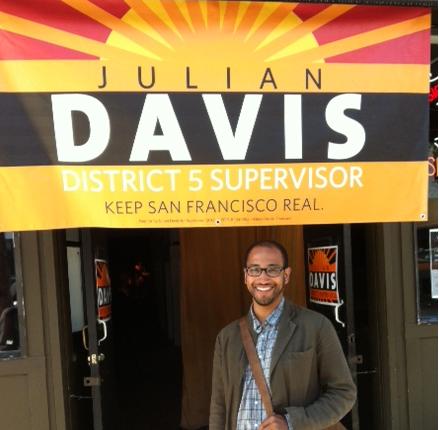 District 5 supervisorial candidate Julian Davis is emerging as the progressive standard-bearer in that competitive race after today receiving the endorsements of a trio of top progressive politicians: Sups. John Avalos and David Campos and attorney Matt Gonzalez, the former board president, mayoral candidate, and D5 supervisor.

Gonzalez had endorsed appointed incumbent Sup. Christina Olague – who he appointed to the Planning Commission in 2004 – but he withdrew that endorsement last month after being frustrated by a series of actions in which she sided with Mayor Ed Lee, moderates, and developers over her longtime progressive colleagues and constituents.

Avalos and Gonzalez are endorsing just Davis, at least for now, while Campos added to his early endorsement of Olague by today endorsing Davis and John Rizzo, who had earlier snagged the other prized progressive endorsement by winning the support of Assembly member Tom Ammiano.

Davis, who was already endorsed by former supervisor and local Democratic Party chair Aaron Peskin, said he’s thrilled with today’s triple endorsement. While some have questioned his anemic fundraising so far, raising less than $10,000 as of June 30, Davis notes that he had been in the race for less than a month before that deadline and that he expects to have more than $150,000 to get his message out.

“What these endorsements signal is a confidence from San Francisco’s progressive leaders, not only in the vision of this campaign, but in our capacity to win,” Davis told us.

Avalos said that he has confidence in Davis’ values, experience, and his ability to run a strong race that will help to reinvigorate the progressive movement.

“Julian is a solid candidate who has been around for years on a number of progressive causes. Running for mayor, I was impressed with his connection to neighborhood issues ranging from small business development to urban cycling and youth and worker rights. His campaign has a good buzz about it, one that I expect will resonate with District 5 residents,” Avalos told us.