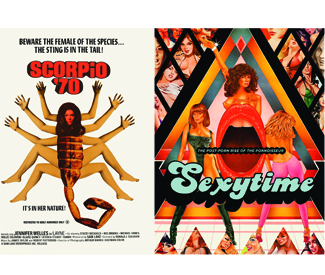 Ohhhh yes. These hundred pages excavate a retro wonderland of film-shot sleaze with the usual tasteless ad lines (Finishing School: “She took a cram course in pleasure”) and graphics variably dime-novel crude, psychedelic, and disco-era slick. There are titles topically trendy (CB-themed Breaker Beauties; Erotic Aerobics; Patty Hearst-inspired Tanya) and parodic (Blazing Zippers; One Million Years AC/DC; Flash Pants). There’s even cautionary sexploitation, as the sheet for 1976’s Female Chauvinists warns “DO YOU KNOW: Women libbers are planning to take over the world? That they have recruiting camps in every corner of this planet?” So that’s where Rush learned about feminism.

Meanwhile back at the Vortex, the venue’s fifth anniversary is being celebrated through the month’s end with a Pop art-themed series of Thursday night double bills. It doesn’t get any more Pop, or Op, than incredible and inexplicable The Touchables, which despite its obscurity today was actually a mainstream 20th Century Fox release in 1968. Ah, the Sixties. This was just a simple tale of four Swinging London model types who, after stealing a Michael Caine dummy from Madame Tussauds, decide to be more ambitious and kidnap a live male pop star. They then take him to their giant-inflatable-plastic-dome country hideaway, torture him with sex play and go-go dancing, and unknowingly await the arrival of gangsters hired by a gay wrestler who also covets the abducted lad.

You know, that old story. Keen minds thought up this insanity: Robert Freeman, the Beatles’ “official” photographer making his directorial debut, cooked up the screenplay with Ian La Frenais (future Tracey Ullmann collaborator) and Donald Cammell (soon to be responsible for 1970’s Performance and 1977’s Demon Seed). The Touchables‘ co-feature is the almost equally daft Deadly Sweet (1967), another Swinging London artifact, albeit one directed by Italian Tinto Brass, who had yet to meet Caligula or his true calling as ass-man equivalent to Russ Meyer’s boobaholic in the softcore sexploitation hall of fame.

Next week things settle down a bit with Streets of Fire, Walter Hill’s fetishistically stylized 1984 music-video fable, and 1971’s Captain Apache, a weak Euro Western enlivened by a trip sequence and Carroll Baker’s apparent belief that she’s acting in a farce.

Then the weirdness level rises dangerously again August 23, with two lysergically bent missives from the “turbulent” decade. From 1969, Cult of the Damned (a.k.a. Angel, Angel, Down We Go) is the least-known of American International Picture’s psych flicks, and no wonder — compared to giddy The Trip (1967), Psych-Out (1968), and Wild in the Streets (1968), it’s a twisted downer. Future feminist singer-songwriter icon Holly Near plays the plump, unhappy only child of a jaded Hollywood couple whose household is seduced whole by rock singer Bogart (Jordan Christopher) and his entourage. Advertised with “If You’re Over 30 This Is A Horror Story,” Robert Thorn’s only directorial feature is rancid, baroque, and bizarre to no end, offering the opportunity to hear Roddy McDowell say “Baby man, I am just sexual. Like sometimes I can just stare at a carrot and baby man, that carrot can turn me on,” as well as Jennifer Jones (as mom) brag “I made 30 stag films and never faked an orgasm.” (It should be noted that shortly after completing her role, Jones had a nervous breakdown.) Cult‘s co-feature is 1962 sci-fi oddity Creation of the Humanoids, which was purportedly Andy Warhol’s favorite movie — that should be recommendation enough.

The series’ final bill moves upmarket to showcase two expensive early 1970s flops. You may search in vain for defenders of 1972’s Bluebeard, which features Richard Burton as the famed ladykiller and an array of Eurobabes as his victims — alas, not including American lounge-act extraordinaire Joey Heatherton, whose final wife is by far the most annoying but lives to tell. For a movie that features Raquel Welch as a nun, it’s pretty slow going, despite some imaginative production design and hints of a satirical zest that old-school Hollywood director Edward Dmytryk just couldn’t grok.

A more rewarding curio is 1974’s 99 and 44/100% Dead, a gangster spoof that supposedly represented a career nadir for director John Frankenheimer. (Actually, his nadir came the prior year with Story of a Love Story, one of those movies so interesting in concept and cast you can’t imagine it’s worthless — until you see it.) What can you say about a film that features Chuck Connors as a thug who screws different lethal weapons into his severed arm socket? Plus a rare appearance by the mysterious Zooey Hall of I Dismember Mama (1972) and Fortune and Men’s Eyes (1971)? That it can’t be all bad, and in fact it isn’t.