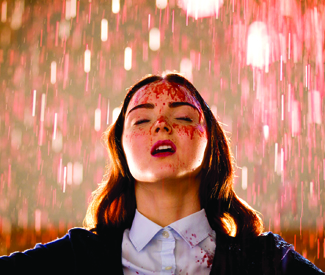 FILM The whole “lesbian vampire” thing may seem a very 20th-century, pop entertainment trope, as it blends sex and violence in one neatly exploitative package offering voyeuristic maximum appeal to straight men, long perceived as the primary audience for both horror and erotica. (In recent years, however, that assumption has begun to seem outdated.) But in fact Irish writer Joseph Sheridan Le Fanu’s Gothic novella Carmilla was published in 1872, a quarter-century before Bram Stoker’s Dracula, thus placing lesbian vampires well ahead of heterosexual ones in literary history. If that order was reversed in movie history, well — you can’t expect much girl-on-girl action to have surfaced before censorship standards began crumbling in the 1960s.

That decade began and ended with two major Carmilla adaptations: French horndog Roger Vadim’s 1960 Blood and Roses (originally titled And To Die of Pleasure) and the English Hammer studio’s 1970 heaving-bodice marathon The Vampire Lovers. Since then, lesbian vampires on screen have become ubiquitous.

They’ve usually been distinctly designed with the “male gaze” in mind, however, appealing to that guy-spot which (to quote the inimitable Axl Rose) would “rather see two women together than just about anything else.” Inevitably, though, someone was going to reclaim the concept for the younger female audience that has made the Twilight books and movies huge.

Ergo we now have The Moth Diaries, Rachel Klein’s 2002 novel turned into Mary Harron’s film. Why it’s an Irish-Canadian production that’s landed on our local SF Film Society Cinema screen for a week rather than a Hollywood extravaganza playing a bazillion multiplexes is a matter for further study. It’s certainly the director’s most mainstream-friendly effort, being less edgy and grown-up than American Psycho (2000), I Shot Andy Warhol (1996), or even The Notorious Bettie Page (2005).

It’s the start of a new academic year at an upscale girls’ boarding school. Despite the strictness of their overseers, the girls manage to be ordinary, fun-loving teens. Becca (Sarah Bolger from The Tudors) is particularly happy to be reunited with best friend and roommate Lucie (Sarah Gadon), as the former is still psychologically fragile in the wake of her well-known poet father’s suicide. But a wedge is driven between them by the arrival of Ernessa (Lily Cole), a tall, English-accented student with a face like a creepy porcelain doll. She “colonizes” Lucie, who at first guiltily hides her infatuation from Becca, then (along with everyone else) accuses her of simple jealousy.

But Becca notices things others don’t, or dismiss: how Ernessa never seems to eat, how she can’t abide water, the sickly sweet smell emanating from her room and her odd disappearances into the luxury-hotel-turned-school’s off limits basement. One ally gets expelled; another, after witnessing Ernessa doing something logically inexplicable, meets a more brutal fate. Meanwhile, Lucie (the same name as Dracula’s preliminary victim in Bram Stoker’s novel) grows seriously ill. Turning to a sympathetic (as well as hot) new literature teacher for help, Becca instead gets inappropriate overtures from Mr. Davies (Scott Speedman).

Klein’s book, which had our heroine looking back on this episode from middle age, insisted on ambiguity: we’re never sure whether Ernessa really is a supernatural predator, or if all this is just a hysterical fantasy Becca devises to process (or evade) her profound grief over losing a parent. Adapted by Harron as scenarist, the movie eliminates that frame and leaves little room for doubt that there be vampires here.

But the film’s weakness is that it still tries to play it both ways, as troubled coming-of-age portrait and Gothic horror, with the result that the two elements end up seeming equally half-realized. Despite an inevitably somewhat glamorized surface, a certain attention is paid to real-world adolescent detail, like the presence of casual recreational drug use or the disappointment voiced by one student whose eagerly awaited deflowering turns out neither good or bad, but just an indifferent experience. There’s also a knowing wink at the usual adult dismissal of teenage ideas when Mr. Davies condescendingly shrugs off Becca’s fears: “Cooped up here you girls can get so close, all that emotion can turn toxic.” The movie is handsome enough, with a color palette that aptly grows darker and more untrustworthy as things progress.

Cole is well-cast for her eeriness, while Bolger gives an intelligent performance even if the film ought to be channeling her character’s growing instability more vividly — as Harron managed very well for Valerie Solanis and Patrick Bateman.

There’s little suspense here, however, and the fantastical elements are seldom staged with any inspiration. You get the feeling that this highly talented director ultimately couldn’t find anything all that interesting in her young-adult-fiction material, but still hoped for a Twilight-style hit that might make more personal future projects easier to fund. (Even after Kathryn Bigelow’s 2010 Hurt Locker Oscar, it still seems like the road is always uphill for women directors.) Instead she wound up with a polished but forgettable genre piece that’s probably the mildest entry in the annals of lesbian (or at least Sapphically-tinged) vampire cinema yet.