Home Two of SF's most venerable cannabis dispensaries get shut down 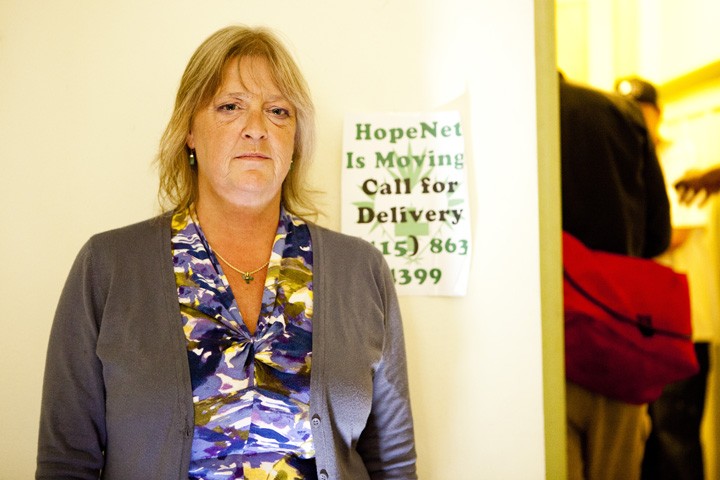 Sadness, anger, and confusion hung thick in the fragrant, smoky air of two of San Francisco’s oldest and most prominent medical marijuana dispensaries – HopeNet in SoMa and Vapor Room in Lower Haight – during their last day in business yesterday, the latest victims of an aggressive federal government crackdown on the industry.

Throughout the day, vendors, patients, neighbors, and well-wishers stopped in to say goodbye and commiserate over a trend that just doesn’t make sense to them, or to the local politicians and city officials that have spent years setting up a regulatory structure that had legitimized the cannabis industry, which thrived as the rest of the economy suffered through the recent recession.

“I’ve always treated this as if it were just a nice coffee house. I’m not an outlaw,” said Martin Olive, whose Vapor Room was a friendly community gathering place and active member of the local business community that gave away free bags of vaporized marijuana to low-income patients on a daily basis. “I almost forgot I was breaking federal law. It was so normal, so legitimate.”

The result has been the forced closure of eight of San Francisco’s 24 licensed dispensaries in the last seven months, with more closures likely in the coming months. Almost all of the remaining clubs have been forced to deal only in cash after the feds threatened their bankers and credit card companies. The industry that grows and sells California’s biggest cash crop is essentially being driven back underground, hurting patients and the sometimes gritty neighborhoods that dispensaries had improved with security systems and a flow of customers that put more eyes on the streets and cash in the pockets of nearby stores and restaurants.

“The people that live here are afraid the neighborhood is going to come back in here. We took care of the entire block. Before us, it was all dealers, so there’s a safety issue,” HopeNet founder Cathy Smith told me as the once-welcoming club on 9th Street near Howard was reduced to bare walls, noting that the owner of the Starbucks on the corner told her he expects his business to drop by 15 percent.

Olive shared the concerns expressed at HopeNet, which he considers “a sister dispensary,” one that also had a generous compassion program for giving cannabis to low-income patients and offering other free services like yoga.

“I’m curious to see what this neighborhood looks like in six months. I know what it was like six months before we got here,” Olive said of his club’s opening in 2004.

But for now, it’s over. Vapor Room continued to do business for most of the day yesterday, but HopeNet was already stripped bare and essentially shut down, and by 3:30pm they removed the cash register and their pot stock. “The signs are down, we’re no longer a pot club, break out the beer,” announced Smith’s son, Bill, a member of the cooperative, referring to one of the many tight restrictions of what the city allowed in clubs. “I’m the only one making light of things today, as a coping mechanism. I laugh so we don’t cry.”

Like the patients, vendors, and local officials we spoke to – who you’ll hear from in an upcoming Guardian cover story looking the end of medical marijuana’s golden age – Olive and Smith are grappling with a federal crackdown they say has myriad downsides and no benefits to anyone but federal agencies that profit from drug-related seizures and the criminal syndicates that now have less competition.

Both Olive and Smith say they voted for Obama in 2008, they believed his statements that he wouldn’t go after businesses that complied with state and local law, and now they feel betrayed.

“I feel fucked by it, betrayed is too easy a word,” Howard said.

“It’s complicated emotions that I’m feeling – let down, confused – at the end of the day, I don’t understand why this is happening,” Olive said. “It’s a community tragedy, it really is.”

Like MediThrive and other recently shuttered clubs, both Vapor Room and HopeNet will still be operating as delivery-only services, but the future seems less certain now that their direct, brick-and-mortar connection to their community has been severed.

They urge those concerned about the crackdown to contact their political representatives, and to turn out today (Wed/1) at 4pm for a funeral march that starts at Haight and Steiner streets near the now-shuttered Vapor Room and goes to the Federal Building on Golden Gate Avenue, where there will be a rally and speeches starting at 5pm.