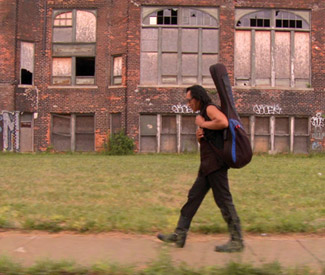 FILM As told in Searching for Sugar Man, the tale of the lost, and increasingly found, artist known as Rodriguez seems to have it all: the mystery and drama of myth, beginning with the singer-songwriter’s stunning 1970 debut, Cold Fact, a neglected folk rock-psychedelic masterwork. (The record never sold in the states, but somehow became a beloved, canonical LP in the closed Petri dish of repression and imminent revolution of South Africa.) The story goes on to parse the cold, hard facts of vanished hopes and unpaid royalties, all too familiar in pop tragedies.

Yet loping into the Sir Francis Drake Hotel in a black suit and teal troubadour’s shirt, guitar slung around his shoulder, the long-haired man in sunglasses known as Sixto Rodriguez by friends and family in his native Detroit seems far from bitter, decades after his hard-to-classify music failed to make an impact on charts then dominated by BJ Thomas and Simon and Garfunkel.

“People who make me mad don’t inspire me — it’s issues. Hate is too strong a passion to waste on someone you don’t like, if you know what I mean,” he mutters, half easygoing ramble and half shy-guy mumble. In the decades since Cold Fact, Rodriguez has channeled the streetwise poetry of his lyrics into a politically active life, attending demonstrations and running for Detroit city council and even mayor at one point, though he’s never won an office.

“Social issues are more interesting to me. I’m about peace and prosperity and the pursuit of happiness — and how about justice?”

His is a curious, complicated conversational mixture of hipster-philosopher whimsy, stream-of-consciousness bohemian spiel, and numbers as hard as cash. The latter inspires the 70-year-old to start to breaking down his appeal in terms of seats sold (5,000 here; 10,000 there), celebrities in the audience (Alec Baldwin was at one recent show), and the money to be had in licensing (the Rolling Stones can charge $100,000 for a song!) — as if he needs to justify his presence with raw data.

Nonetheless, it’s an understandable response. Searching for Sugar Man lays out the ballad of Rodriguez as a rock’n’roll detective story, with two South African music lovers in hot pursuit of the elusive musician — long-rumored to have died onstage by either self-immolation or gunshot, and whose music spoke to a generation of white activists struggling to overturn apartheid.

Opening with the soulful strains of Rodriguez’s unforgettable “Sugar Man” and images of a sunlit drive along the South African coast, the film makes its way to the snowy urban wasteland of the Motor City. Filmmaker Malik Bendjelloul orients himself around the efforts of Stephen “Sugar” Segerman, who wrote the South African CD liner notes for Rodriguez’s second full-length, Coming From Reality (both of Rodriguez’s Sussex albums have since been reissued by Light in the Attic, which is releasing the doc’s soundtrack with Sony Legacy), and music journalist Craig Bartholomew-Strydom, who wrote the story of the search that eventually led Rodriguez’s eldest daughter, Eva, to make contact with Segerman and ultimately Rodriguez’s wildly disconnected fans.

Swedish documentarian Bendjelloul first got wind of Rodriguez’s tale in 2006, from Segerman. “I saw this was an amazing story, but after I heard the album, I thought, what amazing music — it needs an amazing director,” says the filmmaker, sitting across a conference table from Rodriguez. “I didn’t think it would be me. I was nervous that I would screw it up.”

His devotion to the project — which led him to quit his job, pour his savings into the movie, draw his own animation sequences, and resort to filming Super-8-like footage on his iPhone — took him on his own four-year journey.

Rodriguez came to the project in 2008, memorably materializing out of the shadows in Searching for Sugar Man in the window of the house he’s lived in for the last 40 years (and purchased for $100, he swears). He made a living doing demo on construction projects. “I’m from a working class background and that’s what I do,” the musician declares proudly. “I always like to say, ‘Never throw away your work clothes!’ I think it’s good for people to stay active: you can kick a lot more ass if you stay physically fit.”

Of his story’s fairy-tale trajectory, Rodriguez says, “I didn’t believe I was anything in South Africa. In this music business, everybody’s the greatest and latest. Everyone’s a sweetheart. But underneath that, there’s a lot of realism in music. People aren’t as successful as they appear to be. They talk about the wonderful Motown thing, but if you list all the tragedies they had, it wouldn’t be such a pretty picture.”

Still, even one as familiar with the cold facts as Rodriguez can’t deny the power of a great song — and one that he wrote. “This current issue of Esquire magazine has a song of the month: it’s ‘I Wonder,’ a 20-year-old song. The longevity of music amazes me,” he offers laconically, the barest hint of pleasure creeping into his voice. “It can last.” *