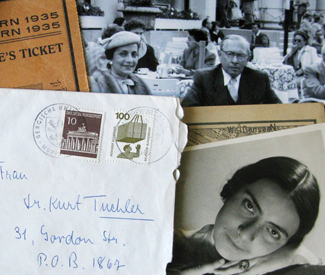 Dust be damned, for all three filmmakers — Arnon Goldfinger (The Flat), David Fisher (Six Million and One), and Daniel Edelstyn (How to Re-Establish a Vodka Empire) — become obsessed with these scraps from the past, and with piecing together their family histories, all of which were studded with tragedy and rarely discussed with younger generations. The task requires the kind of determination that can only be mined from a deeply personal place — and it results in some deeply personal films.

The docs are similar, especially when viewed in the short span of a festival, but Goldfinger’s The Flat is the standout. It begins as the filmmaker’s family descends upon the Tel Aviv apartment of his recently-deceased grandmother, “a bit of a hoarder” who lived to 95 and seemingly never got rid of anything. This includes, as Goldfinger discovers, copies of the Joseph Goebbels-founded newspaper Der Angriff, containing articles about “the Nazi who visited Palestine.” The Nazi was Leopold von Mildenstein, an SS officer with an interest in Zionism. Turns out he made the journey in 1933 with his wife and a Jewish couple named Kurt and Gerda Tuchler — Goldfinger’s grandparents.

Understandably intrigued and more than a little baffled, Goldfinger investigates, finding letters and diary entries that reveal the unlikely traveling companions were close friends, even after World War II. His mother, the Tuchler’s daughter, prefers to “keep the past out,” but curiosity (and the pursuit of a good documentary) presses Goldfinger forward; he visits von Mildenstein’s elderly daughter in Germany, digs through German archives, and unearths even more surprises about his family tree. Broader themes about guilt and denial emerge — post-traumatic coping mechanisms that echo through generations.

Family is a favorite subject for fellow Israeli David Fisher (2000’s Love Inventory). For Six Million and One, he rounds up his brothers and sister for a visit to the Austrian concentration camp where their late father was held as a teen. The elder Fisher recorded his thoughts in a memoir that only David can bear to read. As the siblings engage in the odd pursuit of being tourists in a place of brutality — the film illustrates the town’s changing landscape through eerie, before-and-after photos — their playful arguments escalate into legit psychodrama as the camera rolls and four raw nerves react to their intense emotions.

Interspersed with this journey is David Fisher’s visit with some American veterans who saw unimaginable horrors when they arrived to liberate the camps. It becomes clear that post-traumatic stress doesn’t just affect Jewish families grappling with the after effects of the Holocaust. When Fisher wistfully remarks that his father never spoke about his experiences, an elderly solder tells him, “Maybe you’re better off not having heard the stories.”

Lighter in tone, but with an equally serious back story, is Daniel Edelstyn’s How to Re-Establish a Vodka Empire, which follows the British filmmaker’s quest to import the vodka made at the Ukrainian factory once owned by his great-grandfather. The disheveled Edelstyn, who admits he has no business experience, pinballs between charming and exasperating as he fumbles through meetings with distributors and dodges hostile locals in his grandmother’s hometown. Despite the film’s title, Edelstyn’s adventures in booze are less compelling than the tale of that grandmother, whose remarkable life is re-enacted with sepia-toned silent film-style clips (starring Edelstyn’s wife, Hilary Powell, who’s also the film’s cinematographer), and miniature animations.

THE MORE YOU KNOW

There’s more for fans of non-narrative cinema, as SFJFF unspools several biopics that also delve into troubled pasts — with significant triumphs along the way. No one embodies this more than Roman Polanski, subject of Roman Polanski: A Film Memoir, directed by Laurent Bouzereau and structured as a sit-down conversation with longtime Polanski pal and producer Andrew Braunsberg. If you’re hoping for hardball questions or new information on Polanski’s colorful life, prepare for disappointment; the familiar pillars of the Polanski legend (traumatic childhood growing up as a Polish Jew during World War II; filmmaking success with films like 1968’s Rosemary’s Baby and 1974’s Chinatown; wife Sharon Tate’s gruesome death at the hands of Charles Manson’s followers; and that oh-so-inconvenient sexual assault charge, which came back to haunt him 30 years after the fact) are all covered.

If you’ve read Roman By Polanski, the director’s autobiography, or seen the 2008 doc about his struggle with scandal, Roman Polanski: Wanted and Desired, this is familiar turf. But to hear the celebrated director share his memories in his own voice, encouraged by an interviewer he trusts, is a unique experience.

You won’t hear the spoken voice of passionate, patriotic Yoni Netanyahu, the Israeli commando who died leading the 1976 hostage-rescue mission at Uganda’s Entebbe Airport, in Ari Daniel Pinchot and Jonathan Gruber’s Follow Me: The Yoni Netanyahu Story. But Netanyahu — adored older brother of Benjamin Netanyahu, Israel’s current Prime Minister — was prolific letter-writer, and his words (read by actor Marton Csokas) are an invaluable component of this affectionate portrait. But it’s not all heroic platitudes: Netanyahu, who also fought in the Six Day War and the Yom Kippur War, put the military above everything else, including his marriage.

“I don’t ever remember walking as a young person,” jokes sportscasting great Marty Glickman at the start of James Freedman’s upbeat Glickman. “I always ran. It was just my nature to run.” Though he’s referring to his extraordinary sprinting ability, which got him all the way to the 1936 Olympics (where he was denied the chance for certain glory for Hitler-related reasons), it’s also kind of how he lived his life, attacking bigotry and adversity with sunny side-up resilience. Glickman died in 2001, but his life was well-documented — when he wasn’t making sports history, he was doing the play-by-play for it. As an influential broadcaster (basketball fans: he was the first one to say “Swish!”), there’s no shortage of famous fans willing to weigh in: Bob Costas, Bill Bradley, Jerry Stiller, Jim Brown, and Larry King, who has supremely high praise for Glickman’s skills: “It was like his voice was attached to the ball.”